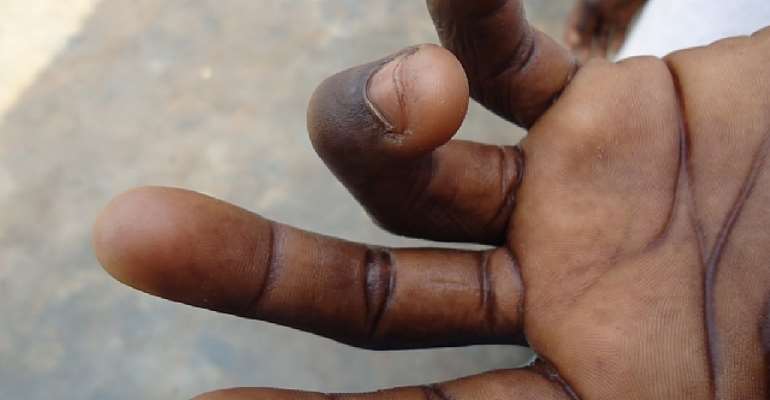 The west African nation of Ghana is rather widely known for its 'witch camps', where mainly old women who are accused of occult crimes and subsequently banished from their communities. They seek refuge in these 'camps' to avoid being killed by their family and community members. But in the village of Sang, off Tamale-Yendi Road, in the northern region of Ghana there is a care center for vulnerable children. This orphanage, built in a typical northern Ghanaian style of a ring of small rooms linked by short fences has around 32 children. The children were rescued, and brought to the care center by family and community members. This center managed by catholic nuns, can as well be called Ghana's 'child witch camp'. It was established few years ago and now serves as a 'safety zone' or 'refuge space' for these vulnerable kids. According to the managers of the orphanage, at least half of the children were abandoned due to witchcraft accusation. In Northern Ghana, belief in witchcraft and magic is very strong. Witchcraft accusation and persecution is widespread. Witches and wizards are blamed for all kinds of misfortunes such as sickness, barrenness, accidents and loss/destruction of properties according to a report, The State and Condition of Alleged Witches in the Northern Region of Ghana, published by ActionAid Ghana.

Very little is known about this 'home' in Sang where children accused of witchcraft or of being 'agents' and instruments of the devil are taken care of.The children are from a day old to sixteen years. They are victims of superstitious beliefs which constitute the basis of the local thought and culture. In many parts of northern Ghana, a child whose mother dies after delivery is often percieved to be an 'evil child', a curse to the family or community and an agent of the devil. In a region where many deaths are seen as unnatural, many babies are accused of killing their mothers through witchcraft and magic. And to prevent such an 'evil child' from wreaking more havoc, the baby is abandoned or dumped at an anthill to die. Children who are born with disability are also accused of witchcraft. Disability is generally percieved to be abnormal and unnatural. Witchcraft accusation is often a way of reacting to abnormalities in children. Children with disabilities are often thrown into an 'evil forest' or are killed in other to remove the 'curse' from the family or to disable and get rid of their their evil magic. According to local care givers, some children were brought to the center by their parents due to fear that they could be murdered by family or community members who regard them as evil.

There is need for an intensive public enlightenment campaign to get people in northern Ghana to abandon the superstitious belief that associates disability with withcraft and magic. People need to be educated to act and react with care and compassion, not irrational fear, to any form of disability or 'abnormality' in children or in any other human being.

But the much needed awareness program cannot happen due to lack of principled stance on the witchcraft phenomena. Witchcraft is a charged and controversial topic. And many locals do not like tinkering with it, local authorties do not like getting involved. There are too many people- local chiefs, priests, sootsayers etc with vested-political and financial- interest in witchcraft belief and practice. Also those trying to combat witchcraft related abuse are mainly faith based organisations -like the one managing this orphanage or religious individuals -who actually believe in witchcraft. So they do not openly question or are willing to challenge witch beliefs.

For instance, two NGOs working to address the problem in the region stated in their brochure that they 'do not challenge the existence or otherwise of witchcraft and its effects on individuals and communities'. It is difficult to understand how these organisations can execute a comprehensive and effective campaign without challenging witchcraft claims. Getting the local population to understand that witchcraft is an imaginary crime- a form of superstition- should be a critical part of any efforts or program to tackle and eradicate witchcraft related abuse.

Apart from public education, victims of witchcraft accusation need practical help and support. Many children at this orphanage were born with deformities in different parts of their body-on the head, hands, legs, belly etc. Some of them have speaking or hearing difficulties. A few cannot talk, walk or communicate effectively. One child has some problem on the fingers, and another on the toes.

One of the children was born with a sore on one of the legs which has so far defied all the locally available medical care. Some of the children at the center would eventually die if they do not recieve the urgent medical assistance they need in order to survive. Some urgent surgery and medical care could rectify the health problems, ensure their survival and help save their lives. Unfortunately, the required medical expertise is not available in the country. And even if it is available, the local care center cannot afford it.

These children are branded witches not only due to fear and superstition in their families and communities but also due ignorance of the medical solutions to their health problems and lack of resources to cater for their needs.

Hence, I am using this opportunity to appeal to all well meaning individuals and groups to come to the aid of these innocent children and others who are suffering and dying due to superstition, dogma and irrationalism in the region.

FixingTheCountry Movement to march in support of Akufo-Addo'...
58 minutes ago