What News? Is Ghana’s Electoral Commission Exposed? Its Yet To Be Confirmed 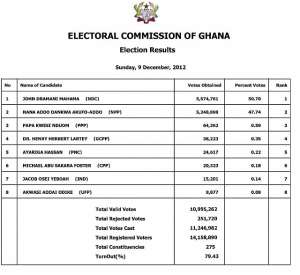 The Ghana's electoral commission's underhand chicanery for two decades since it was commissioned by the PNDC dictatorial administration to superintend over Ghana's population census for purposes including economic planning, the electoral register and also act as referee in general and Presidential elections with impartiality is about to be detected.

The commission's work is believed to have been heavily flawed with botched up figures and huge performance difficiencies.

The magnitude of bias, partiality and such untold institutional preference of one group to another as it is forensically detected in an up and coming matter involving the 2012 general and Presidential elections would merit the hither-to unassuming august institution being satirically rechristened the Selectorial Commission rather than an Electoral Commission in reflection to its nefarious activities over the past twenty years.

The commission and most especially its chairman has been so unbecoming and arrogated to itself the title of the Monarch of all it surveys and wealds unequalled powers to, contrary to the popular would-be mandated choice of Ghanaians, select, choose and impose who it wants to lead the country as well as those it wants to represent people and communities in Parliament.

If confirmed, there will be serious question marks not only on the credibility of the past activities of the Commission and its personnel, there would be follow up ad inquirenda as to the credibility of Ghana's population as depended on by the statistical services and other affiliated stakeholder institutions including national economic planning.

As it stands now it appears the commission has grossly misled Ghanaians just as much as they have killed many for less also in their individual public or private official capacities antecedent to becoming members of a supposed most trusted and respected institution in Ghana.


The gloom that was spontaneously imported into the ever vibrant and glitzy social ethos particularly in this post-election spirit that gripped party supporters even including children and toddlers told the tale that there was something grievously wrong in Ghana.

The usual lively solarium Ghanaian mood was not just seen to have been doused even to a glow but completely quenched, indicative of an omenous mismatched happening across the country.

Christmas, as the occasion is well known and celebrated in Ghana and elsewhere is markedly expressed in a blend and variety of feelings. Chrismas has a characteristic of 'you'll never walk alone' spirit such that others spark up glows of happiness in others' faces yet the 2012 X'mas was overtly markedly adiaphoristic.

Not even a Presidential Christmas message was heard as is apparently the status quo in most Christian-dominated countries around the world. Somebody apparently has empocketed not only the Christmas festive happiness of Ghanaians but derailed, ditched and murdered the spirit and image of the destiny of the present and future generations. Who might this ugly gremlin be and where might it be lurking?

The hunt has closed in on the supposed killjoy with all fingers pointing to the Kwadwo Afari Djan-chaired Electoal Commission whose greed has unequivocally sold Ghanaians into a home-made slavery of some sort to the powers that be for only God knows what reward but thanks to Nana Addo Dankwa Akufo Addo, Dr Bawumia and Jake Otanka Obetsebi Lamptey, whose fearlessness and never relenting astute leadership has propelled a spade of investigations into a serious electoral fraud and filed a suit before the Supreme Court.

Mysteriously, the dark cloud that obnubilated Ghana's post- Afari Djan declaratory allocution of John Dramani Mahama as winner of the presidential elections is thinning out. The mood of the country is changing, hoping for their mandate to be put where it should belong that will be known sooner than later.

Evidence before the Supreme Court, some of which are in public domain and for which reason I can set up my own court of personal opinion has sent riples of shock waves like pruritus to the respondents who felt and thought they could escape heinouis next to treason crime undetected but today feel so itchy that they can't hide their feelings.

This is purely an issue that the constitution provides for redress and follow-up action and mention must be made of the fact that win or lose either way, Ghana wins, democracy wins, our judiciary would then pass a serious and difficult acid test and it will historically dubbed 'The Ghana way'; a shining example that all other African countries including those that have preceded a juridical process to solving similar electoral misunderstandings with causing mayhem to emulate its example. Between now and the final determination to be announced by the Supreme Court, Ghana becomes a unique star that will be focused on high above by all eyes across the whole world.

Before I proceed any further, as a point of interest, I deem it an important ergodic factor for readers to refresh their memory that, Dr JB Danquah, grand nephew of Nana Addo Dankwa Akufo Addo, who led the UGCC in the Gold Coast struggle for self-government from the British Colonial masters spaning from the late 1930s depended on the provosions of the then Colonial constitution and took the Colonial administration to court on 21 (twenty one) different legal suits, seeking for the rights of the citizens of the Gold Coast colony and won all his suits against the Colonialists before finally the UGCC was launched at Saltpond on 4th August 1947.

In all his suits filed before the Court, Mr Obetsebi Lamptey (LLB; Barrister at Law), father of Mr Jake Otanka Obetsebi Lamptey was his lead counsel and lawyer who crushed and reduced the British Colonial lawyers representing the administration into rubble before the law as it was applied.

Dr JB Danquah and his UGCC thence became a thorn in the flesh of the Colonial administration for knowing too much and pushin too far. Their cases, mainly drawn from constitutional provisions relating to abuse of powers, oppression and suppression of citizens and organisations were supported with hard core evidence and exhibits that were so obvious, so irrefutable and so compelling that though all the judges were of British extraction, however bias and prejudiced they were, totally forewent their inclinations and stuck to the law as it was applied to decide on the basis of merit as was required to be written down in their summing up and ratio decidendi.

Dr Kwadwo Afari Djan, chairman of Ghana's electoral commission and candidate John Dramani Mahamah, flagbearer of the NDC square-up with Nana Akufo Addo, Dr Bawumia and Jake Obetsebi Lamptey before seven reputed high calibre judges of no mean standing of the Supreme Court in a few weeks in a suit that can be dubbed the clash of the Titans.

Has Afari Djan bitten more than he could chew this time round? Do Nana Addo and his team have any case at-all? Are they not playing a ruse on their supporters by pretending appearances as a way to dulcify their defeat before their teeming supporters just to calm them down? Will they not take the Court's verdict in tears and thereafter meet the wrought of NPP supporters? Can John Mahama be implicated as a complicity?

Has Afari Djan deceived Ghana and the international world that has showered on him several performance-related acclamations as a star of electoral commissioners in Africa and beyond? Can he retain and maintain his hitherto fame and glory and walk with head held high or keep his head bowed in shame and disgrace? Will John Dramani Mahama wry his jaws and plead I dey steal keke before the Judges? Can the respondents/defendants be able to put up any credible defence or will they concede to having commited the offence?

Will there be an unanimous, split or quorum per curiam decision in this matter or will the respondent/defendants be exonerated from any wrong doing by the Court? All these questions will soon be answered as the D-day is just in the corner and soon all appetant interested parties will witness everything across the world, so hold your breath.