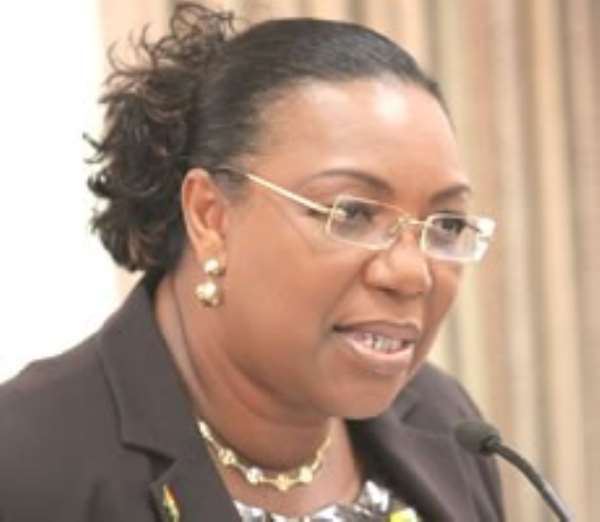 A member of the National Democratic Congress is making a strong case against the prosecution of the former Attorney General Betty Mould Iddrisu.

Felix Kwakye Ofosu is convinced the former AG was incompetent in her job but not liable for prosecution in the controversial judgement debt paid to Alfred Woyome.

Betty Mould Iddrisu as Attorney General in 2010 and early 2011, led government to pay 51 million cedis to Alfred Woyome for alleged financial engineering in the construction of stadia for the CAN 2008 and for the abrogation of a contract by the erstwhile New Patriotic Party administration.

She was reshuffled to the Education Ministry but she later resigned in 2012 when the controversial judgement debt saga hit the airwaves and the prints.

Even though the prime suspect Alfred Woyome is in court for causing financial loss to the state and defrauding the state by false pretense, many are questioning why key government actors- Betty Mould Iddrisu and finance Minister Dr Kwabena Duffour are not in court to answer for their roles in the payment described as fraudulent.

Ken Kuranchie, a card bearing member of the New Patriotic Party, and editor of the Daily Searchlight newspaper could not understand why Mrs Betty Mould Iddrisu and Dr Duffuor are walking free.

On Peace FM Kokrokoo on Wednesday, he said if President John Mills was minded, he would ask the two officials to answer in court for negligence and dereliction of duty.

He said the money paid to Woyome is so huge it could provide each Ghanaian 3.00 cedis if it was shared and wondered why that amount was given to one person for no work done.

He charged Ghanaians to vote the NDC out in December so a new government will retrieve the money from Woyome.

But in a reaction, Kwakye Ofosu said the NPP had no moral authority to ask for a come back given its track record of corruption.

He did not understand why the EO Group - two officials he said had strong links with the NPP - would be given in excess of $300 million for their roles in Ghana striking oil in 2007.

Kwakye Ofosu berated the concerns of the NPP panelists on the show, Ken Kuranchie and Kwamena Duncan, accusing them of ranting and pretending as though the 51 million cedis will solve all the problems in Ghana.

On the prosecution of Mrs Betty Mould, the NDC Communication team member argued the former AG did not do the necessary due diligence but that was no justifiable reason for her to be prosecuted.

Likening her job to that of a radio presenter like Kwame Sefa Kayi, Mr Kwakye Ofosu said if a presenter consistently shows ineptitude on his job and plays the wrong sound bites all the time, it will not be a good reason enough to haul him before the courts.

He said the best any boss can do under the circumstance is to fire the radio presenter.

"There is no law that says if you are incompetent" you can be prosecuted, he said.

He said critics must be able to establish the criminal intent of Betty Mould before calling for her prosecution.

Chiefs and Queen mothers of Nadowli-Kaleo congratulate Alban...
48 minutes ago