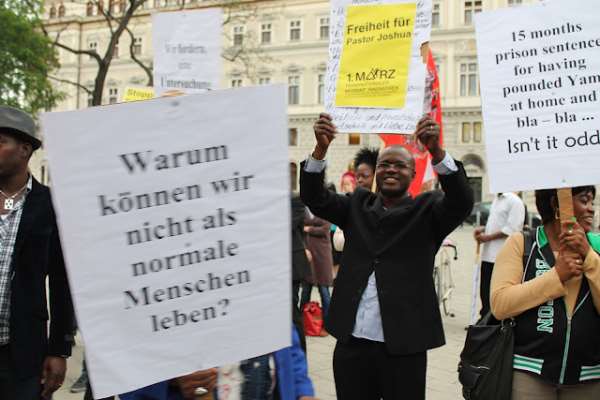 "The hottest places in hell are reserved for those who in time of moral crisis preserve their neutrality", John F Kennedy attributed this quotation to Dante Alighieri while Martin Luther King Jr. added to it that "He who passively accepts evil is as much involved in it as he who helps to perpetrate it."

June 1st, 2012 will go down in history in Vienna, Austria as the day Africans announced boldly that the fear of racial arrests by the police and detentions in Austria was over. They made a statement that they could no longer be intimidated to submission. It was the day Africans trooped out on the street in mass in a peaceful demonstration that closed the ever busy road of Landesgerichtsstraße for almost 1 hour as the protesters marched from Volkstheater to the front of the prison in Landesgerichtsstraße which was strategic because behind it will be the hosting building of tomorrow's court hearing.

The solidarity support was for Pastor Joshua Esosa who had been accused to be a street drug dealer and had been sentenced 15 months last year in Wiener Neustadt in Lower Austria, when every evidence provided in court had shown almost 99% that Pastor Joshua Esosa had not been the one. One of the infuriating evidences used against the pastor had been yam powder found in his house which the police had not deemed neccessary to cross-check in the laboratory before they had concluded that it had been cocain powder.

This protest was very historical not only that many Austrians with good heart were part of it or that Nigerians from different ethnic groups turned up reasonably after all many Nigerians also had turned up during the gruesome murder of Marcus Omofuma by the police in 1999, but it was historical because for the first time in Austria more of the protesters were Africans from different countries like Nigeria, Congo, Ethiopia and Kenya etc. unlike the usual trend of national, ethnic or religious solidarity associated with Africans that makes their presence invisible in any protest.

Will justice continue to elude Pastor Joshua Esosa in this case? June 6th, 2012 (tomorrow) should answer this question because that will be the day of the appeal hearing in Wickenburggasse 22, Saal 305/3 at 9.30 am. Be there!

Many thanks to Nigerian/other African internet news reporters and Nigerian print media houses that have done justice to the plight of Pastor Joshua Esosa by publishing/re-phrasing the earlier article that brought this case to the world audience titled " 'I Am Innocent' - Nigerian Pastor Joshua Esosa Sentenced 15 Months In Austria For Drug Cries For Justice." Please you can google this headline to get a clearer picture of the case.

Special thanks to AIT (African Independent Television) for their continuous airing of this sad fairy tale to their audience and to all individuals and cooperate bodies that have contributed to the success of the case in any form so far. I want to remind all that the battle is not yet over until the case is won. As it stands now, we have managed to progressively move from genesis to Job and that tomorrow will be the day of revelation which is the big day we all have been waiting for. We should all endeavour to stand up for justice unrelentingly until the judge fairly hammers out the last judgement.

"The hottest places in hell are reserved for those who in time of moral crisis preserve their neutrality", John F Kennedy attributed this quotation to Dante Alighieri while Martin Luther King Jr. added to it that "He who passively accepts evil is as much involved in it as he who helps to perpetrate it." He added "He who accepts evil without protesting against it is really cooperating with it." Where do you belong?