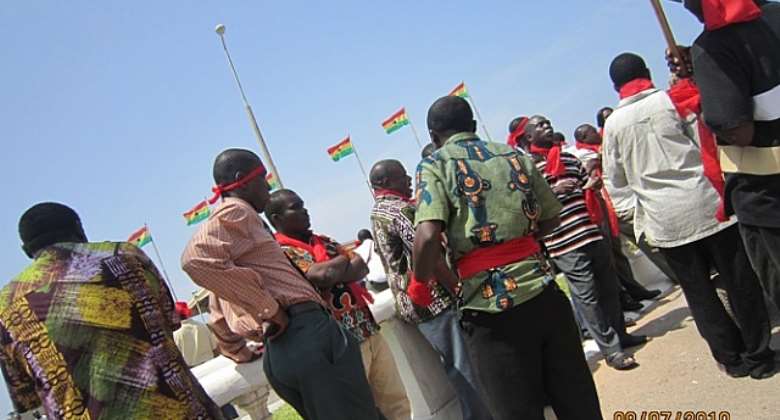 Accra, Feb. 7, GNA – The Brong Ahafo Regional Executive Committee of CLOGSAG on Tuesday threatened a sit down strike on Thursday, February 9, if issues concerning their migration onto the Single Spine Salary Structure (SSSS) were not satisfactorily addressed.

"We can no longer guarantee that calm or peace. We stand by the deadline of Thursday, February 9, 2012, for a sit down strike if these issues are not satisfactorily addressed.

"We would also hold our leadership responsible if the distortion in the Single Spine Salary Structure is not addressed to the benefits of our members," it added.

The threat was contained in a statement issued by Mr Dramani Yakubu Clifford, Brong Ahafo Regional Secretary of CLOGSAG and copied to the Ghana News Agency in Accra. It said the decision was taken at the end of an emergency meeting held on Thursday, February 2, in Sunyani.

The statement said having considered a press release issued by the National Executive Committee (NEC) of CLOGSAG and the apprehension of CLOGSAG members in the Region on the implementation of the SSSS by Fair Wages and Salaries Commission (FWSC), wish to state that, "The SSSS as implemented now has disadvantaged majority of our members as compared to their counterparts in the public service contrary to the assurance that the SSSS was to eliminate such disparities". "In addition to the above, it has been observed that some of our members have not yet been migrated despite the repeated assurance by government to migrate all public sector officers onto the SSSS by close of December, 2011. Notably among them are the Internal Audit Unit, the Non-Commission and Game and Wildlife."

"The top-up allowance introduced to mitigate negative and insignificant changes as was done for other public service institutions as a result of the hype of expectations among public officers has not been applied to the CLOGSAG members.

"In view of the above observations underlying the structure, we CLOGSAG members in Brong Ahafo Region have realised that there is no consistency, equity and fairness in the implementation of the structure.

"The only excuse that has maintained calm among our peeved members is the assurance that the implementation of the SSSS is a process and for that matter that the anomaly would be rectified sooner than later."

Residents of Settlement unhappy over destruction of road in ...
29 minutes ago