Makola No2 calls for collection of fire debris 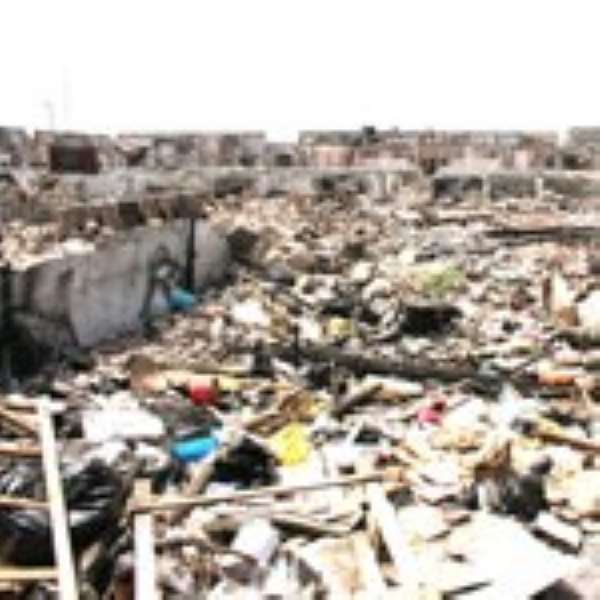 Market women at the Makola No 2 Market are calling on administrators of the market to collect the debris left behind by the devastating fire, since it is reminded them of their loss, and also that the resulting dust was destroying their wares and posing a threat to their health.

According to the market folks, they do not understand why the officials were delaying in the collection of the debris and rebuilding the market, four months after the disaster.

They added that market was under the management of the Social Security Insurance Trust (SSINT), due to which they could not approach the Accra Metropolitan Assembly (AMA for assistance, as other markets in the metropolis do to address their grievances and problems.

They said although the market administrators promised to rebuild the structures as soon as possible, as the market has an insurance cover with the State Insurance Company (SIC), four months down the line, nothing is happening.

According to them, they were losing income, since trading under temporary structures was difficult, and their suppliers also not willing to give them items on credit basis.

They stated that the goods were being destroyed due to the harsh weather conditions, since most of the items need low temperatures and also protection from the rays of the sun.

They added that although, the administrators, in their efforts to give them some form of comfort, had provided them with some canopies, but they were not enough to accommodate the over 2,000 traders.

They stated that during the afternoons, the temperature under canopies becomes too hot resulting in it affecting most of their wares.

One of the market folks called Evelyn asserted that she was married with children, who depend on her income from trading.

Evelyn recounted that she took a loan from the bank to import goods to sell the very week the fire broke out, and that now the bank was demanding its money with interest.

She said the President, on his visit to the market after the fire outbreak, promised to support them financially, by giving them loans, and added that although the commitment had been met, not all of them had access to the loans.

She also pleaded with the government to reduce the 16 per cent interest rate, describing it as too high, because they took loans from banks to operate their businesses before the disaster.

'This is not my original voice, I have never being well since I started selling after the fire outbreak, due to the frequent inhaling of dust from the debris, and the little interest made from sales is spent on healthcare. In fact, we are really suffering; the officials must do something,' she pleaded.

Meanwhile, Mrs. Rosemary Sapowa-Grant, Head of Operations at Makola Market Company Limited, responded that the delay in the reconstruction of the market and collection of the debris was not deliberate, although they were aware of the problems and health implications it was imposing to the traders.

She attested to the fact that the market had an insurance cover with the SIC, but feasibility studies need to be conducted before the removal of the debris and reconstruction works begin.

She said consultations were ongoing between the company and their development partners, and that since it was a process it would take some time.

'I have met with their leaders and explained the procedures involved in the transactions and consultations with the insurance company. It is not a one day affair, so I do not understand why they are making all these allegations. The fire did not affect them only, we have also lost daily revenue as a result,' she said.

She, therefore, appealed to the market women to be patient with the management, since plans were underway to clear the debris and reconstruct the market.