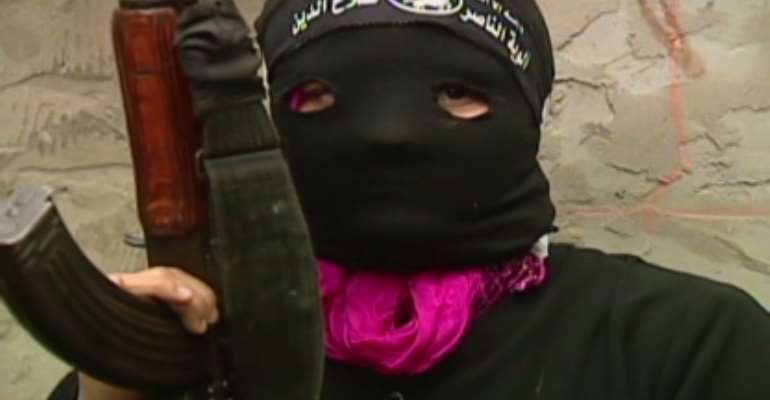 
With faces covered and guns loaded, Palestinian militants are training among the sand dunes of Gaza.

Shouts of "Allahu Akbar" -- God is great -- are followed by intense target practice. These militants are preparing to fight their sworn enemy, the state of Israel. But there is a difference -- they are women.

Training alongside men, they say they are ready to go into battle and are calling on more Palestinian women to join what they call the resistance against Israel.

CNN was given rare access to some of these women inside Gaza. The militant group insisted the location was kept secret, so we were blindfolded in the back of a car and driven to a house.

Five women are sitting in the back garden, all from the Salah ad-Din Brigades -- one of several militant groups in Gaza -- all veiled and armed. Only their eyes are uncovered.

Sitting beside a table of guns, rocket-propelled grenades and land mines, the scene is carefully choreographed for our camera and the message is clear.

One woman tells me: "I am trained and ready to be a suicide bomber against Israeli soldiers."

She rejects any doubt whether Islam allows women to fight.

"On the path of the Prophet they used to fight and struggle, so there is no trouble with that. They used to transport the wounded, but now we have ambulances for that."

Another woman has gold rings adorning one hand and a hand grenade in the other.

All of them assume there will be another war with Israel soon -- a prospect considered possible on both sides of this conflict as cross-border violence has increased in recent weeks.

In Gaza, they are considered by many to be freedom fighters. In Israel and in many Western countries, they are reviled as terrorists.

A second woman says she is ready to lay her life down to fight Israel. She says her children wet the bed at night because they are afraid of air strikes.

Early in 2009, Israel carried out hundreds of air strikes against targets associated with Hamas -- the group that controls Gaza -- in retaliation for rocket attacks into Israel. Palestinian medical sources said more than 1,000 people were killed in the Israeli offensive, many of them civilians.

Holding an AK-47, with a pistol resting in her lap, she says: "I want everything for my children, first for them to be able to live a happy life -- which is the right of every child in the world."

It is hard to reconcile the sight of children's rucksacks hanging on a tree next to these heavily armed women. The five women say there are tens of females fighters in Gaza and the number is rising. They claim they are as young as 20 and as old as 50.

Four years ago, a 64-year-old grandmother blew herself up near Israeli soldiers in Gaza, wounding two. She was the oldest Palestinian female suicide bomber.

And at least one of these women in a Gaza backyard wants to follow in her deadly footsteps.