Obsession with Political Power: the Case of Laurent Gbagbo 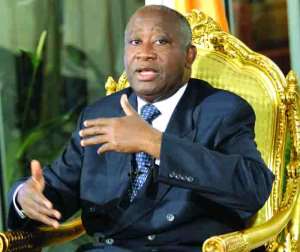 Did I know that Africa was just about setting in motion it's own system of democracy where two presidents rule one nation when I authored “AFRICA'S LEADERSHIP QUAGMIRE: any way forward? Dear reader, I had not the slightest hint that Ivory Coast was the nation to redefine democracy in the African context in such a vague and unrealistic form it has just done! Please, do me the honour by reading the full publication which featured concurrently on the Ghana's myjoyonline.com and the US based humnews.com.

I shudder at the reality that the once peaceful nation called Ivory Coast is almost on the verge of sinking again into the dregs of political conflict which engulfed the country some years ago. The sight of fallen victims of the conflict most of whom were women and children was such as despicable scenario that the eyes had to behold! Things had virtually fallen apart and the war resulted in the loss of innocent souls. The tears of children could not stop the blood-thirsty and power-obsessed political 'trustees' from firing gunshots indiscriminately! I certainly can't bring back the pains and undignified savagery that went on in the land of Ivory Coast and no one should try re-opening unhealed wounds! Not even the Gbagbo's or the Ouattara's should revisit sane minds with such a toxic pain! It surely should not happen again for Africans are neither savages nor cannibals; we are humans with a sense of dignity and pride. Sorry, reader if I sound harsh in your ears but must we not condemn the on-going political garbage in Ivory Coast in the strongest terms? It is so sad that we live on a continent that prides itself as the premier to human civilizations yet we seem far from the realities and the application of common sense in our political governance systems to the extent political conflict has virtually become engrained in Africa's politics. What a shame!

Until the death of its longest serving President, Felix Houphouet-Boigny who ruled the country right from her time of independence, Ivory Coast lacked any real experience in democratic governance. This is because under his dictatorial claws, Felix Houphouet-Boigny held onto power for over 3 decades baring any democratic political activities in the country. It was after his death that multi-party politics started to unfold and then the thorny issues such as who qualified to vote in Ivory Coast became contentious. As if these issues were lighted-weighted, they became so thorny that conflict finally reared its ugly head and split the nation apart.

In my article AFRICA's LEADERSHIP QUAGMIRE; any way forward?, I talked about political dynasty in Africa and cited Togo and Gabon as two among the several African countries that have experienced the unfortunate scenario where political leaders simply pass on the reigns of governments to their kinsmen and one wonders if the late Houphouet-Boigny would have ever ceded power to anybody apart from his kinsmen. Because of his long stay in power, the political aspiration of the people was curtailed. Even though under his reigns, the country was not only politically stable but also economically viable, it must be emphasized that his long stay in power was by itself a breach of trust and a denial for a fair and democratic political activities in Ivory Coast. Certainly, that was a trait of dynastic rule and the rippling effect is vivid for all to see.

The Ivory Coast's civil war was prompted by the new law ushered in through a referendum that required a presidential candidate to have both parents born in Cote D'Ivoire. Obviously, this bared the main opposition leader Alassane Ouattarra from contesting in the country's election. With his huge support base in the country especially the north and the obvious game of political gymnastics Gbagbo sought to pursue against Ouattara, it was not surprising that the civil war finally broke out in the country.

Events leading up to the peace process had been difficult but the Marcoussis Accord of January 2003, supposedly the most comprehensive peace pact, was expected to end the crisis. Importantly, the main characters of the conflict signed this agreement which among other things dealt with the issues of nationality, eligibility for citizenship and land ownership. With these thorny issues having been resolved under mutual consent and satisfaction, it was expected that Ivory Coast was on the road to national cohesion. Unfortunately, elections after the Marcoussis Accord had been delayed for six consecutive times.

In the events leading up to the October 31st, 2010 elections, there were concerns over possible vote rigging and as a result ballot papers had to be printed in Europe and a new Independent Electoral Commission comprising representatives of all the political parties was put in place. In the face of all these, it was the expectation that peace would be restored after the October 2010 elections. For now, one can say no to this expectation and unless a fast and decisive approach is adopted, Ivory Coast would sink again into political chaos!

In my view, the single person who should rationalize his position and make way for peace is Laurent Gbagbo. As a history professor and a critic of the Felix Houphouet-Boigny regime, and having suffered political imprisonment from 1971 to 1973 he should be the last person to provoke war in his cherished home country. Becoming president in October 26, 2000 after Robert Guei had fled the country, Laurent Gbagbo has perhaps become so obsessed with power that is why he could defy the will of the people and over-turn their verdict. I daresay that he is trying to entrench himself on the seat of the presidency and I am not surprised at all. In my recent publication of November 24, 2010, I did indicate that “having the entire state apparatus under their control for a few years nurtures an unbridled desire to remain in control even after the expiration of their mandatory regime”. This is Gbagbo's ailment.

Indeed, it is shocking that the two personalities under the Ivory Coast saga are high-profiled public figures. As an economist, Alassane Ouattara has had extensive working relationship with international organizations. He served as the Deputy Managing Director for the International Monetary Fund, in Washington DC. As mentioned earlier, Laurent Gbagbo is a history professor. Both personalities have what it takes to be statesmen if only they will exercise restraint and allow due process to take its course. My worry is; if such elite personalities will engage in such political sycophancy, then where are we heading towards?

It is important to state that regional and international bodies must remain resolute in their decision not to recognize the government of Laurent Gbagbo. The AU must bite now or remain mute forever! I am however excited at the stance of ECOWAS. At its extraordinary meeting held in Abuja, Nigeria on Tuesday December 7, 2010, the West African regional body unequivocally called on Gbagbo to step down and hand over power to Ouattara. That is indeed a refreshing call coming from ECOWAS.

It is expected that the African Union and other regional bodies would continue to exert pressure to stop the power-obsessed Gbagbo from holding on to political power. Africans are tired of backslapping behaviours of leaders who are expected to blaze the trail of democratic governance. Surely, the world is watching to see how at the continental level, African leaders can stop this show of tyranny coming from Gbagbo. His conduct smacks of hypocrisy at the highest level and an indictment to his academic laurels. Quoting from my earlier publication, I wish to ask Gbagbo, “Why must people think that they and their lineage are the only one who must rule?” How I wish to hear the history professor whose academic records are undoubtedly akin to a genius respond to this question. How does he expect the people of Ivory Coast and the world not to wonder if his desire to stay in power is not a way of covering up any excesses under his regime?

Peace is the foundation to progress and we must not allow one man to deny the good people of Ivory Coast from leaving in peace and tranquility. The era of fear and political intimidation in Africa cannot be revisited. The success story of Ghana's journey to democratic governance must remind the likes of Gbagbo that times have changed and bully tactics would not be countenanced in Africa. Let the world tell him to deal with his own obsession privately. Eyes are watching! Long live Ivory Coast; Long Live Africa!

The writer, Adama Bukari, is a full-time author/publisher and the C.E.O of Exceed Media Ltd, a company that delivers superior services in publishing, media consultancy, business communications and advertising. He is also a motivational speaker and the editor-in-chief of JUVINILE INSPIRER; a youth magazine which seeks to deal with youthful inertias. Currently, he is studying Master of Philosophy in Global Leadership at the Institute of Professional Studies, Legon. He was a finalist in the JoyFM's MY BUSINESS 2010 Entrepreneurial Mentorship Programme.

Court issues warrant for arrest of Xavier Sosu for 'disrespe...
35 minutes ago