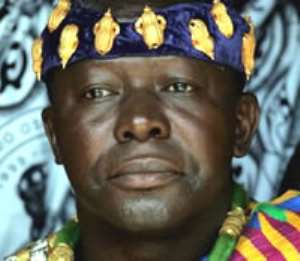 Once born a con person, so shall you remain until your last and final breath? A fool may by coaching and exemplary wise sayings learn to improve upon their acts to become a better and sensible person, but an insatiably greedy con person will forever stall in their acts. Kumawuhemaa upon all the latest decisive declaration by Otumfuo Osei Tutu II, the Asantehene, that the real and only true royals in Kumawuman normally able to ascend the Kumawu paramount throne are the Ananangyas, is still behaving as the doubting Thomas. As an artful con woman with an insatiable quest for wealth and fame, she soothes the anger of her Ankaase “supposed” royals with further lies. The few wise ones among the Ankaase family are blaming her intransigence and greediness for causing their current situational disgrace costing them their faked royalty. The foolish ones are supporting her in toto. They are singing her praises, prostrating before her and sharing her cup of lies. She summons her Ankaase family members and tells them, “Asantehene se Ananangyafo nso tumi di akondwa no bi na nso me ankasa me si me hene” - Asantehene says the Anananangyas are also able to ascend the paramount throne but I will install the person of my choice. She has twisted the Asantehene's declaration. Asantehene said, “If we are talking about the true royals, they are the Ananangyas, the descendants of Barima Tweneboah Kodua, the originator of the Kumawu paramount Stool. So, Ananangyas, go and take your throne, install the person of your choice and bring him to show to me”

Instead of Kumawuhemaa telling her Ankaase royals that they have come to the end of the tethers; she is stupidly telling them that she is the sole person traditionally vested with the powers to choose anyone of her wish to be crowned the next paramount chief of Kumawuman. Anyway, it is her right, in the exercise of her freedom of speech to say what she thinks and believes in. It is also the imperative right of her listeners to believe what they want to believe provided it does not infringe on the liberties of others. I am once more reiterating that the Ankaase royal family will never again ascend the Kumawu paramount Kodua Stool. The Kumawu paramount stool belongs to the Ananangyas and the Odumases. I have researched into the history of the Kumawuman paramountcy and the documentation in my possession gives 100% credence to my assertion which also goes to confirm the Asantehene's declaration. The Ankaase family members wriggled themselves in as paramount royals through the deplorable evil machinations of their forebear Yaw Dabo, with the covert but tacit support of his brother in-law, Nana Osei Yaw Akoto, the then Asantehene. To learn more about how they achieved their malevolent aim, please do read my previous published articles. Just click on my name showing above in the right hand side corner in blue to take you to the thread of write-ups on the Kumawu Chieftaincy affairs.

There are some Ankaase guys who gather at a spot in Kumawu called “Apatakese ase” to drink themselves senseless. After getting inebriated imbibing “pitoo” and other alcoholic drinks, they begin to issue empty threats. I have already written about this but a persistent bigmouth from Ankaase who threatens me in his comment contributions to my publications, needs to be taught a lesson. To whomever this braggart is it should be known to him that I am on my way to Kumawu to celebrate the coronation of the God's Chosen One from the Ananangya royal family. I shall be wearing a purposefully designed T-shirt conspicuously bearing the name JOHN FOSU. Secondly, I shall not hesitate to use reasonable force to defend myself should I feel threatened. What level of force is reasonable, that idiot may wish to know? The circumstance will determine the applicable force needed to quell any such threat. I don't think I may not be compelled to use my acquired Marshal Art knowledge and tactics to cripple whoever that boisterous but empty bastard is. Why can't I make my self-defence a public spectacle to grace the occasion? Why shouldn't I arrange for the police permission to get that Ankaase faggot to the “Chief Park” to pump sense into his useless and deformed person while under the public watch and applause?


As empty- headed and unbelieving as most of the royals are, especially, those from the Ankaase family, they have at this stage incurred the wrath of God which is but the tip of the iceberg. Many a time have I stated as a vessel of God that a person after the heart of God has been secretly selected and anointed to succeed the late Barima Asumadu Sakyi II as the paramount chief of Kumawu. These royals of whom four come from Ankaase doubted God. They obstinately held onto their unflinching aspiration to contest to become the next Kumawuman paramount chief even though the odds against them were spelt boldly on the wall. No descendant of “AYO” will ever again rule Kumawuman. Now the chronology of the mishaps so far suffered by the defiant contesting Ankaase royals are as follows: Yaw Sarpong has been divorced by his wife of many years, Akosua Amponsah, the daughter of the late Opanin Kofi Fofie of Kumawu Asikafuo ama ntem. Akosua is resident in the U.S. A. Akosua had issued an ultimatum to Yaw Sarpong to abandon any desire for the chieftain to return to the U.S. She had come to the realisation that he was not going to win the contest and moreover the credit crunch and the economic recession were having their own toll on the family's budget. As a single person, she could not cope. But Yaw Sarpong as adamant as Kumawuhemaa kept hanging around in Kumawu. Akosua felt enough was enough so she divorced him. Kwasi Sarpong, another hardened Ankaase royal with all eyes set on becoming the next Kumawuhene, also refused to see reason. With his ears waxed and eyes blind to reason, he stayed in Ghana doing all sorts of shoddy deals with the aim of wresting the chieftain from the God's intended one. He entered into a deal with his sponsor (name withheld), an hotelier. He had stupidly made a secret pact with the hotelier. Once crowned the chief, he would allow his sponsor to take over all the royalty and other related payments to accrue to Kumawuman from the government's usage of the Dobonso land for teak plantation. The sponsor spent nearly 1.4 billion old Ghana Cedis on Kwasi Sarpong. Out of this amount, 400 Million Cedis went to some (name and place withheld), 200 Million Cedis went to a queen (name withheld but your guess may be as good as mine), 50 Million Cedis went to alias “Tikenenkene” and most of the Kumawu sub-chiefs had their share. This money was a bribe paid on the understanding that Kwasi Sarpong was to be helped to ascend to the Kumawu paramount Kodua Stool. He has been simply obstinate. And “obstinacy is the cause of the horns of the hornbill”. I have been constantly warning that the throne has gone back to its original source, the Ananangyas, by the design of God. How then should Kwasi Sarpong stupidly as an “AYO” great, great grandson, spend that much money thinking he can have it? Secondly, was he not going to be worse than Barima Asumadu Sakyi II? He had in a secret pact ceded Kumawuman's No. 1 source of revenue to this sly businessman. Now Kwasi Sarpong's Accra's house has a “For Sale” sign posted on the wall. The sponsor is trying all means to recuperate at least part of his money. This is why he has put Kwasi Sarpong's house up for sale.

Kwasi Sarpong may go back to those whom he bribed to claim his money back. The money was given to them on a specified term of agreement which stands binding. Whether it was written or verbal, it still remains contractual. Do I say it pays him right? No, even though he never heeded my warnings. I can help him get his money from all those who cunningly took money from him based on false assurances. Yaw Kankam and Dr. Sarfo are the smart ones from Ankaase who have so far not lost anything to anyone though they still have their eyes on the throne which but recedes farther and farther from them with each passing day.

Kumawuhemaa has uttered from her own mouth that she has found the “Abamo” antique. I will only be lying if she is herself lying as she often does. I hope she is not presenting any fake one as it will be carbon tested. Moreover, a traditional means will be employed to test whether it was the original one or it is a replacement copy. God is about to clamp the wings, and muffle this chirping Kumawuhemaa.

The incoming chief will need the cooperation of all Kumawuman citizens worldwide to be able to realise essential developments for Kumawuman. He will be as wise as the Biblical King Solomon and will have all the good qualities of both Kings David and Solomon. He will work with anyone who truthfully aspires for the betterment of Kumawuman, be the person poor, rich, wise or foolish. Your honest and prosperous-inclined advice, money and or manpower will be required.

Kumawu will surely have its true royal from the Ananangya side in June 2010. This time, it is without fail. All those opportunists and or coward Ananangya royals who desire to bribe others should learn from the problem faced by Kwasi Sarpong. There is only one person currently anointed by God to succeed the late Barima Asumadu Sakyi II as the Kumawu Omanhene. He is that person from the Ananangya royal home who has been on the ground fighting for his birthright since the demise of Barima Asumadu Sakyi II in 2007. Anyone who happens not to be the person as described should not waste their money and energy. Paying bribes to people will never secure you the throne. Anyone who doubts me can proceed with their nefarious anti-development cum malevolence; they will fail.

My salutations to the Chosen One of God. I will be around to celebrate your coronation. It will give you the opportunity to see and interact with that vessel of God unknown to you but called John Fosu , who has been vociferous in the fight to win the Ananangyas their birthright usurped by the Ankaases. All the progressives charting the same course are known to God and may be mentioned in my thank you article to be published in June 2010.

How can you blame NDC for Akufo-Addo’s “away away!” humiliat...
3 minutes ago