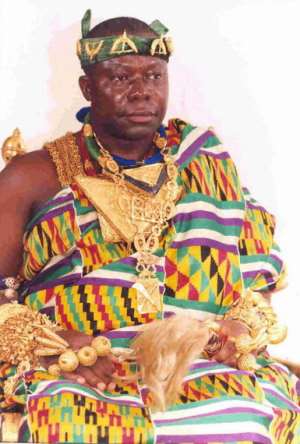 My patience is wearing thin but I will continue to withhold my emotions. I will not yield in to emotions, for if I do, it will be a catastrophe for all parties involved. I had previously in most of my published views on the Kumawu chieftaincy disputation in relation to the intentional dilly-dallying by Otumfuo Osei Tutu II, highlighted on certain pertinent issues of great concern.

All such concerns have been ignored and here we are today, sitting, brooding over a very sad event that could well have been a preventable disaster.

I had warned about Kumawuhemaa's intentions and proclamations about the Kumawu chieftaincy dispute. She had said, she would drag the case for ten years by the end of which period; the two octogenarians leading the Ananangya side of the case would be dead. I brought this to the attention of Otumfuo Osei Tutu II and the whole world through my published views and stand on the case.

The case would have dragged on for almost six years by the end of June 2013. There is no hope it could be resolved any time soon. I am currently pre-occupied with other issues of equal importance. Nevertheless, I am thinking of slotting in the issue of Kumawu chieftaincy affairs once more. No, I will wait a further few months to see if time will be the healer.

As I write, the Head of the Ananangya Royal Family, Nana Nti Kwakye, has passed on Wednesday, 20 March 2013. He was about 85 years. Death, that fearful herculean creature has sneaked in unannounced and laid his icy hands on him. He has bundled him away, frozen as he was, in his palanquin to the underworld, the land of no return.

Nana Nti Kwakye was the one who invoked the Asantehene Great Oath (Asantehene Ntamkese) on Kumawuhemaa when she had sought to claim that the Ananangyas are not legitimate Kumawu paramount royals but her Ankaase's are.

What has Nana Nti Kwakye to tell Nana Tweneboa Kodua I and the other departed souls now that he has joined them in the Underworld (asamando)? He has not much to tell because he could not complete the job he well started owing to the tactical delays employed by Asantehene to resolving the issue.

Now, there is only one other Octogenarian, older than Nana Nti Kwakye, left. He is one Nana Adusei. Will Asantehene wait for him too to die of old age as wished by Kumawuhemaa before deciding the case in her favour? At this stage, I will give Asantehene the benefit of the doubt. I hope he will advise himself; noting that "Time and tide wait for no man" and "Justice delayed is justice denied"

I extend my Easter seasonal greetings to Asantehene. I seize this opportunity to express my deepest condolences to the bereaved Ananangya and Kumawu-Odumase royal families, especially, the wife and children of Nana Nti Kwakye, on this occasion of the passing of their beloved family Head, uncle, father and husband.

May your soul rest in perfect peace, Nana Nti Kwakye. Damirefa due. Due, due ne amane hunu.

Vendetta against Special Prosector needless – Vitus Azeem re...
12 hours ago