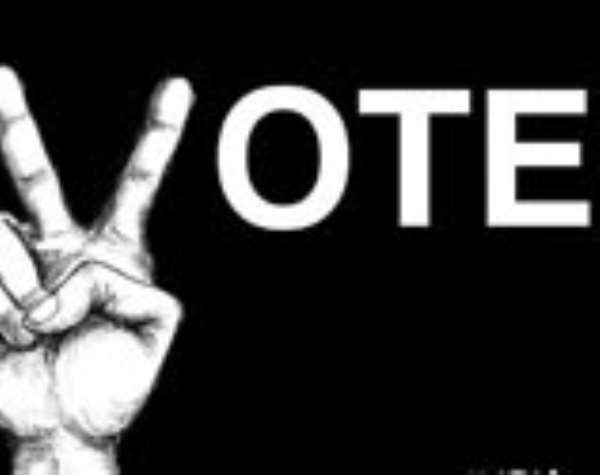 The battle lines have been drawn by Alan Kyerematen, who kicked off his campaign last week. He states the obvious by urging his party's delegates to vote for a presidential candidate who can attract floating votes. And, naturally, he sees himself as the floating voters' favourite candidate.

In this article, I argue that it should not be assumed that floating voters are only found among the general electorate. There are floating voters among delegates of an internal party competition. A delegate who has no allegiance to any presidential nominee and whose unpredictable decisions can swing the outcome of such contest one way or the other is a floating voter within a political party like the New Patriotic Party.

The test is simple: Win them first to prove to us that you are indeed attractive to floating voters.

With a CDD survey putting the number of swing voters in Ghana as high as 28 percent (some 3 million voters) of the total voter population, no party in Ghana can win power without winning a sizeable majority of this group of undecided voters to its presidential bid.

Indeed, going by the fact that less than 0.5% or 40,000 of the votes cast on December 28, 2008 was what determined which of the two candidates, John Evans Atta Mills and Nana Akufo-Addo, won that presidential race, the results prove that the deep pool of floating votes was competitively swam by the two former class mates to a record photo finish.

The two men have both shown they can attract floating voters to their party, even if it took Prof Mills three general elections to prove his case.

But, one may undertake a more searching query and ask: which of the floating votes won or lost were due to the strength of the candidates' individual appeal, the parties' corporate appeal, the record of the Kufuor government and the pull or otherwise of the total opposition call for change?

But, for the purposes of winning this year's NPP presidential primary, campaigning on the issue of floating voters is one thing for a presidential nominee. Showing how what informs such confidence in your ability to win over swing voters is where the decision-makers (delegates) should focus their interrogative minds on.

The first obvious question is this: who are the floating voters? The second question, “And what might win them over to your side?”

Undecided voters are described as voters who are unsure about how they plan to vote in the election, making them open to input from any campaign or candidate.

Many undecided voters are young and new voters, who have not yet established their own personal political philosophy and are yet to be convinced.

A cursory sampling of the more than 114,000 NPP delegates makes interesting reading. It shows that more than 80 percent of those tasked to elect the 2012 presidential candidate of the NPP are under the age of 45. Can they not be trusted to make a choice closer to that of the youth of Ghana?

What defines a floating or swing voter is an unwillingness to commit to a particular party or faction. A typical group in Ghana are the voters who consider themselves sympathisers of Nkrumaism. They don't like to waste their votes on the CPP, so would swing between the NPP and CPP, depending on which party is in office and which candidate and message appeal to them.

Let us be clear on this fact: in Ghana, there are swing voters even within all the political parties. Floating voters can be identified by religion, region, ethnicity, socio-economic class, gender, age and which of the two main political parties they least want to win.

You simply don't become the one who can win floating votes by merely proclaiming yourself to be so. So, those who say they can attract floating voters must be put to strict proof now.

Test one: have you ever won an election?
Test two: is there any scientific survey to support your claim?

Admittedly, there could be candidate who would never have stood for office or won an election before August 7. But, that shouldn't mean they cannot attract undecided voters to their party. Ergo, in the absence of any of the two tests above, there is a third test. That test is a live one: win the 2010 flagbearership. Convince the swing voters in your party to vote for you on August 7 to support your claim that you are the favourite of floating voters.

It is only during a national election that party loyalists may not be said to be undecided or swing voters. In an internal contest, where every candidate is a party member, there can be more floating voters than you may normally find in a national election. So, unless you can persuade such undecided delegates in your party to swing the votes your way you have no case saying you are more popular than the rest outside of the party than within the party.

In this NPP leadership contest, there are 'certain' or 'lock' votes - voters who are solidly behind or partisan to a particular candidate and will not consider changing their minds whatever the others say. This is the basis of the so-called factionalism within the NPP.

But, even many of those solid votes could have been solidified through a process of substantial analysis of the candidate's electability ratio. Thus, it becomes more obvious that such intra-party factions may be largely crystallised or driven by who those party members think can be best trusted to win power.

Indeed, the undecided voter within a political party is more inclined to be persuaded by one item only. An NPP loyalist wants one ultimate victory: winning power in a national election. So the undecided delegate is most likely to settle her vote on the candidate who can easier bring victory in 2012. This is what makes a candidate's ability to win his party's swing voters to his cause crucial.

The consideration of personal monetary gains for delegates, that was an issue in previous primaries has been neutralised by the over 4,000% increase of the electoral college – from less than 2,300 in 2007 to over 114,200 in 2010.

This makes the issue of winning over undecided voters within your party to your individual presidential bid even more pertinent. The sheer size of the electoral college offers the party the largest opportunity to sample a candidate's popularity than any opinion poll could provide.

Indeed, the population of the NPP electoral college translates into one out of every forty Ghanaians who voted for either candidate Mills or candidate Akufo-Addo on December 28, 2008. That is the added advantage of this radically expanded electoral college. Prove your ability to swing undecided voters to your side right here. The proof of your popularity is in the electoral college.

To buttress the earlier point that the paramount consideration of the floating NPP delegate is “who can lead us to victory”, the decision to make the over 105,000 polling station executives across the country the dominant decision-makers on who become the flagbearer becomes more obvious.

They, along with the 4,500 Electoral Area Coordinators, are the closest party operators on the ground. They live in all the 22,000 voting communities in Ghana. They live, eat, play, work and talk with their compatriots. They are best disposed to the candidate voter preference of both NPP sympathisers and the general public.

They can better sense which candidate is most feared or preferred by the NDC, the ruling party. They have the pause of the electorate in their communities.

So they can be trusted to be influenced by who the people on the ground want to lead the NPP in 2012. They will vote for who can be best trusted to bring victory in 2012.

For the NPP flagbearership, winning the swing vote is a very important aspect of a successful political campaign. The success of their campaign would be determined by their ability to win over the majority of floating voters in the NPP to their candidacy than by merely making unfounded claims about their so-called superior capacity to attract floating voters to the NPP in a general election.

In addition to helping the candidate win the presidential primary, a sweep of the swing vote can also indicate that the candidate is flexible, strong, and a valuable asset to his or her party.

Therefore, their campaign strategists should invest a great deal of energy and time in identifying the swing vote within the electoral college and figure out how to secure it, sometimes working swing voter by swing voter to turn the tide of opinion of winnability to their side, if possible.

Swing voters will have a marked influence on the outcome of this flagbearership contest. That will be the test of the claim of who can best attract floating voters to the NPP in 2012. It is a scientific test, not a propaganda kind.

On an interesting departure, a study in 2008, examining the psychology of the undecided voter suggests the candidates and their campaigns may be wasting their time and money. In an issue of Science, researchers reported that people who think they are undecided about an issue often have made up their mind at an unconscious level.

Social psychologist Bertram Gawronski, PhD, of the University of Western Ontario explains: “It's not that people are lying to the pollsters. It's that they may not consciously recognize the automatic associations that influence their decisions.” Gawronski and colleagues Silvia Galdi and Luciano Arcuri studied this in a group of 129 residents of Vincenza, Italy, late in 2007, during a time when the community was divided about the proposed expansion of a U.S. military base.

While the people in the study genuinely believed they were undecided on the issue, at a subconscious level many appeared to have biases that ended up predicting their eventual positions.

Gawronski says a version of the automatic mental association test could prove useful to political pollsters for probing the unconscious biases of voters who declare themselves “undecided.”

And since many voters who say they are undecided may not be, candidates for elective office may be better off focusing on keeping their declared supporters energised.

“The lore in politics is that campaigns need to target undecided voters,” says University of Virginia psychology professor Timothy D. Wilson, PhD. “But this research suggests that it may be much more effective to focus on your base by registering as many people as you can and getting them to vote on Election Day.”