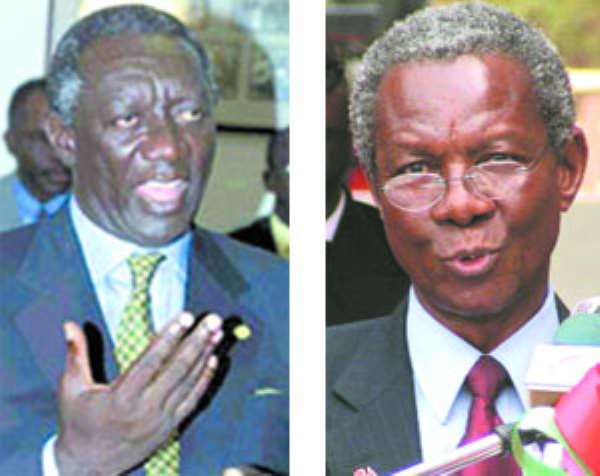 THE pronouncment by a leading member of the New Patriotic Party (NPP), Mr. Kwame Pianim, to the effect that President John Evans Atta Mills is incorruptible, after comparing his government with the two previous regimes headed by, Messrs. J. J. Rawlings and John Agyekum Kufuor (JAK), has sparked intense debates among the political parties and civil organisations.

While the former President, Mr. John Agyekum Kufuor, has condemned Mr. Pianim for making such a pronoucment, his party (NPP), has also issued a strong statement condemning the assertion.

Mr. Pianim however remains resolute, insisting that he still stands by his words.

The anti-corruption crusader, Mr. Colins Appiah Ofori, who is a member of the NPP, has also come out to support Mr. Pianim, that Mills is incorruptible.

Mr. Frank Agyekum, who is the spokeman for former President Kufuor, told The Chronicle in a telephone interview yesterday, that his boss was the first to come out publicly, that as a president “you are always tempted with inducements.”

It was based on this experience that he (JAK) decided to improve upon structures, including the setting up of the Office of Accountability, the declaration of Zero Tolerance for Corruption, and other institutions to combat corruption.

Mr. Frank Agyekum stated that what Mr. Pianim said, raises more questions than answers, adding that an attempt to create the impression that Mr. Kufuor did nothing about fighting corruption under his tenure, was unfortunate.

He challenged Mr. Pianim to come out and tell the whole nation those who gave the brown envelopes to President Mills, which he rejected.

“What we are asking is that was Mr. Pianim there when the bribes were offered before the President rejected them? What was his interest? Who told him? Or was he the one who gave the bribes to President Mills before he rejected them? We need to know all these. It is however not true that Mr. Kufuor did nothing in the fight against corruption.”

Mr. Agyekum, who declared that Mr. Kufuor was honest about events that surrounded his presidency, said his presidency did everything possible to make corruption very uncomfortable to all and sundry, and that for someone who was at the time a member of the party not to raise a word, but now say such curious things, was unfortunate.

“What prevented him from making such comments under President Rawlings and Mr. Kufuor? I find it curious for him to say those things. It has no basis at all,” he said.

To him, the yardstick being used by the opponents of Mr. Kufuor, when he stated that he had rejected bribes, should be used against this regime.

According to him, those who attempted to bribe President Mills, should be arrested and prosecuted.

“I have no reason to doubt what Pianim said about Mills, but what we want is that the same measure given to Kufuor when he said that he has rejected offers, should be used for this government.”

Meanwhile, the NPP has also called on President Mills to arrest the individuals who attempted to bribe him, and that he should do nothing to cover up for the people.

The party's Communications Director, Mr. Kwaku Kwarteng, noted in a statement issued in Accra yesterday, that an attempt to bribe the President in his office, was not only unfortunate, but also a setback in the fight against corruption.

“The New Patriotic Party has been dismayed by the revelation yesterday that President John Evans Atta Mills, the highest public servant, is refusing to expose criminals who have attempted to offer him bribe.

The statement continued, “It is questionable that the President failed to cause the arrest of such criminals when the incident happened. It would appear that President Mills, and the NDC government he presides over, have an unhealthy interest in protecting such criminals.

It is to diffuse such an impression that the President needs to stop shielding them, and offer them to the law, without further delay.” The NPP further argued that the President's shielding of the wrongdoers, indicates the government's lack of commitment to fighting corruption, opining that coming at a time of ongoing investigations into the Mabey & Johnson corruption scandal, the revelation of the President's protection for the criminals was embarrassing to the Presidency, the National Democratic Congress (NDC) government, as well as the nation.

The assertions of the NPP were swiftly rubbished by the NDC, which stated that the pronouncement of Mr. Pianim was reminiscent of what informed Mr. Kufuor to award, then candidate Mills, which NPP members kicked against.

According to Mr. Johnson Asiedu Nketiah, General Secretary of the NDC, the pronouncement by Mr. Pinain about President Mills, was a statement of fact.

To him, President Mills was not like President Kufuor, who declared Zero Tolerance for corruption, and later turned round to say a different thing.

Admitting that President Mills was incorruptible, the NDC's chief scribe made a mockery of the NPP, and urged them not to expose their ignorance in public.