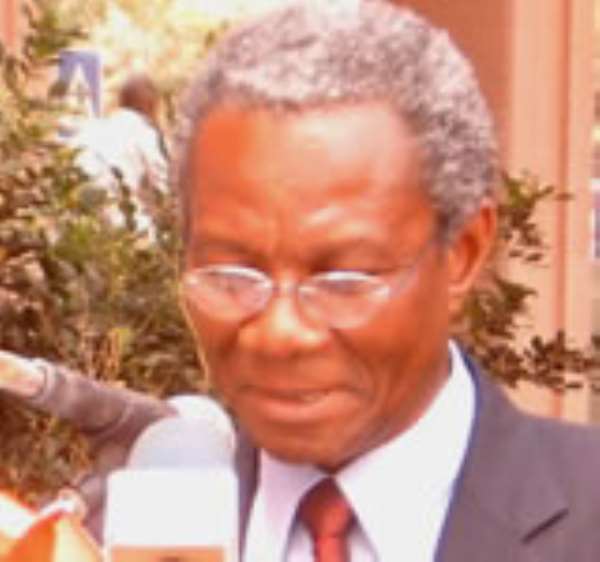 
Less than 48 hours after his controversial 'brown envelope endorsement' of President Mills, the rumour mill is choked with speculations that the President is considering naming his latest admirer, Kwame Pianim, as Finance Minister in a major cabinet reshuffle early next year.

The veteran politician and renowned economist is to replace the 'tired' incumbent minister, Dr. Kwabena Duffour.

Dr. Duffuor, a former Bank of Ghana Governor, is said to be on the list of ministers to be dropped in the impending reshuffle and that President Mills has been shopping for a replacement, which may be found in Mr Pianim.

Though difficult to confirm, the rumour is making a lot of waves in several political circles, more so when it came at a time the one-time New Patriotic Party (NPP) presidential aspirant seems to have found solace in the ruling national Democratic Congress (NDC).

Mr. Pianim, would be recalled, had described President Mills as incorruptible, saying he had seen him on two occasions rejecting some brown envelopes.

He went on to insinuate that he cannot vouch for Mills' two predecessors, ex-Presidents Jerry Rawlings and John Agyekum Kufuor, because he had not seen them reject bribes.

The statement initially attracted charitable comments from the NDC, with the party's General Secretary, Johnson Asiedu-Nketia, describing it as a confirmation of the party's consistent claim that Professor Mills has a huge moral status, comparable to none in Ghana's contemporary politics.

However, by Wednesday, the NDC had changed position, with accusations that the President's action goes against the fight against corruption since he did not cause the arrest of the bribe givers.

Even though the opposition NPP and a faction of the NDC have condemned that statement, unconfirmed reports say the President is eyeing Mr Pianim to be the next manager of the country's economy, as perhaps, a reward for their friendship, which dates back to their days in Achimota.

Pianim had been struggled with himself since Monday when he made the allegation at a debate organised by Joy FM in collaboration with Coconut Grove Hotel, and had to virtually run away from a number of radio stations after he realised he could not parry the barrage of questions fired at him.

At a point, the politician lost his cool and answered a number of questions with rhetoric and equivocal responses, some of which were glaringly incoherent.

For instance on Tuesday, under incessant questioning by Asempa FM, Pianim virtually swallowed his words when he said he did not know any 'John the First or John the Second', leaving the host shouting “hello…hello” to a dead phone line at the other end.

The economic consultant, yesterday again dashed away when he appeared on Oman FM and Adom FM, asking journalists to 'go to school'. When asked to identify which Johns he referred to, he said in Twi: “Me pawo kyew mennim!” to wit 'I beg I don't know'.

He said he was only testifying to something he knew, and invited anyone who wished to testify the good deed of Former Presidents Rawlings and Kufuor to do so.

The NPP has not only expressed dismay at Mr. Pianim's comments, but also stated that they want President Mills to expose those involved in the attempted bribery for arrest.

“If people have become so emboldened that they are able to walk up to the highest office of the land and seek to offer bribe to the President of the Republic, then we are losing the fight against corruption. Such people should be exposed immediately.

“It is questionable that the President failed to cause the arrest of such criminals when the incident happened.

It would appear that President Mills and the NDC government he presides over have an unhealthy interest in protecting such criminals. It is to diffuse such an impression that the President needs to stop shielding them and offer them to the law without further delay.” Said the NPP's Communications Director, Kwaku Kwarteng.