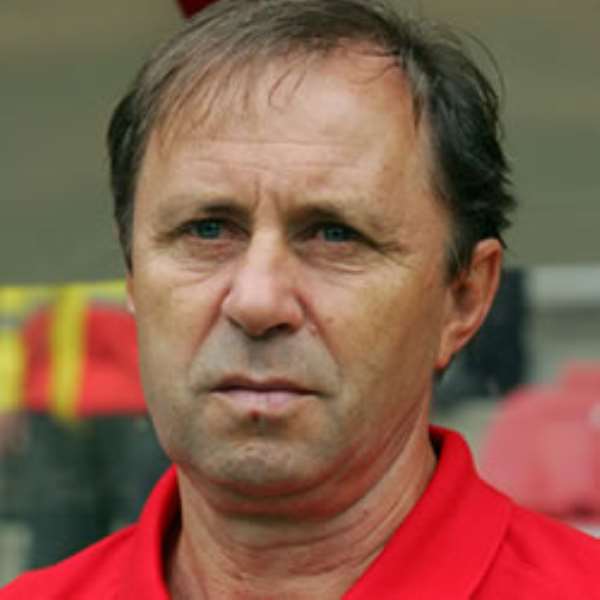 Did I hear Milovan Rajevac the so-called coach of the Black Stars saying Michael Essien, Sulley Ali Muntari and Asamoah Gyan - have incurred his displeasure, for which the appropriate punishment will be meted out to them? I beg your pardon Sir!

In the last weeks, the unexplained behavior of the three Black Stars players has generated so many hullabaloos. The editorial of media houses like the Chronicle lashed out heavily at the three players. The greatest joke of the hullabaloos is Dr. Nyaho Tamakloe's outburst that the three players be sacked from the national team.

Dr. Nyaho Tamaklo forgets to ask himself in the first place, why in heaven's name should the Kwesi Nyantekyi led GFA impose such a “mumu” with no technical merit on Ghanaians as a coach.

From the genesis of the search for the head coach of the Black Stars after the exit of Claude Le Roy, Mr. Kwesi Nyantekyi told Ghanaians that; “the GFA was looking for a top class coach and not any ordinary coach”. He rubbished aside qualified Ghanaian coaches like Sellas Tetteh, Jones Attuquayefio among others and went ahead to impose this “mumu” he called a coach on Ghanaians. Even more insulting is, the Kwesi Nyantekyi led GFA has agreed to and paying this ordinary coach $45k a month while his Ghanaian Assistant Kwesi Appiah was denied the $6k a month. Talking about what a fellow Ghanaian can't do and what an ordinary Serbia can do because he is white. But history is on our side that none of these have “mugus” brought any trophies to Ghana except our own Ghanaian coaches.

We should be asking Mr. Kwesi Nyantekyi if “Mumuvan” Rajevac is the type of top class coach he wasted taxpayers' hard-earned foreign currency travelling around the world to shop for. We should be asking Mr. Kwesi Nyantekyi if there are no better coaches in the land who could be paid and encouraged properly to do a better job than “Mumuvan” Rajevac. Mr. Kwesi Nyankyi should be apologizing to Ghanaians before calling for any action against our Ghanaian heroes like Michael Essien, Sulley Ali Muntari and Asamoah Gyan.

Ghana's current nosedived position in the Fifa ranking can only be blamed on the abysmal performance of this “Mumuvan” Rajevac and his lack of any iota of technical expertise. Let nobody be fooled that Ghana was the first African nation to qualify for the world cup and so “Mumuvan” Rajevac deserves extra bonus or deserves to be treated with kid gloves as a hero of the land. We should rather be thanking God that we were drawn in a weak group consisting of Sudan, Benin and Mali. And even that, we lost to Benin and struggled to draw with Mali at Kumasi Sports Stadium recently.

We should be thanking the quality and professionalism of players like Michael Essien and Sulley Ali Muntari in particular and their commitment to national duty. We should never overlook their commitments towards qualifying Ghana for the last world cup and next year's world cup. There is no a problem of indiscipline with players of our team. Rather what we have here is a clear bankrupt technical and indiscipline bench headed by “Mumuvan” Rajevac.

Nobody should get me wrong. I don't condone any act of indiscipline of any player in the national team at any level. But let us call a spade a spade and tell Mr. Kwesi Nyantekyi in the face that “Mumuvan” Rajevac is not a coach let alone qualified to be called a top class coach. The one who needs a sack here is “Mumuvan” Rajevac if we are to make any progress at the Angola 2010 African Cup of Nations and South Africa 2010 world cup games beyond losing to Benin and struggling to draw with Mali.

This is a man who could not even win a local African cup of nation tournament recently held in Cote d'Ivoire. He lost the final game by 2 goals to nil to a war ravaged nation like the Democratic Republic of Congo. This was after the same team under Kwesi Appiah beat the DRC by 3 goals to nil at group stages. What a hell are we expecting him to deliver at Angola 2010 where were drawn in a group of death?

If you ask me, I will say “Mumuvan” Rajevac cannot do 'foko' to Essien, Sulley Ali Muntari and Asamoah Gyan. “Mumuvan” Rajevac should be sacked now as coach of the Black Stars to save Ghana football. He does not deserve to be the head coach of our national team. There is also the need to investigate who and who is benefiting from the imposition of this “mumu” on Ghanaians as a coach. Ghanaians deserve to know why “Mumuvan” Rajevac deserves to be paid a whopping $45k a month while his Ghanaian Assistant Kwesi Appiah does not deserve $6k amonth. The GFA should address this problem and leave Essien, Sulley Ali Muntari and Asamoah Gyan alone.

Nobody should be fooled that playing down the importance of the experience of senior players and replacing them with junior and inexperience players is what we need to make progress in Angola and South Africa. We need to address the technical deficiency under “Mumuvan” Rajevac, for proper discipline to return to the national team. In my view this is the only solution to rebuilding confidence of our players in their coach. We need someone better than this one Mr. Kwesi Nyatekyi calls a coach if we are to make any progress at both Angola African Cup of Nations and South Africa 2010 world cup. Sack “Mumuvan” Rajevac now!