Akufo Addo’s Vision for Ghana is All Die Be Die 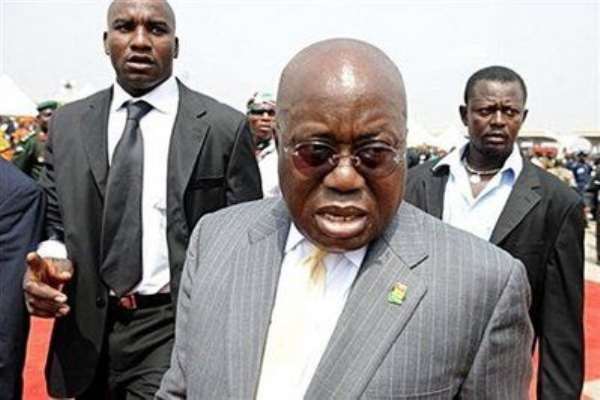 Ever since he got elected as the flag bearer of the New Patriotic Party (NPP) over 6 months ago, I have been following his behavior with utter disbelieve and amusement. In fact, in the beginning, I said NPP's Nana Bottom was just exhibiting adult exuberance because he got “elected” this time to lead his party in the next general elections as compared to being appointed the last time by Mr. Alan Kwadwo Kyeremanten to lead the NPP in 2008 to save him from further humiliation.

Despite doctored figures from one and a half regions, he still lost the 2008 election. Interestingly and due to his arrogance, he has, till today refused to concede defeat even after his lawyers Atta Akyea and co failed to use ex-parte motion to subvert the constitution and the will of the people.

The facts are clear that Nana Bottom has been campaigning as a lone Presidential Candidate, across the length and breadth of Ghana for the last 6 months and still, the results on the ground do not look good for him. The results can only be summarized in two words: “Nko Yie”. His obsession to be President of Ghana at 73 has fallen flat, even before the real election 2012 race begun. To put it bluntly, Nana Bottom's campaign is going nowhere, the case of being in a cul de sac. He thinks just because his father was given a “farewell gift” due to his old age by his appointment as a ceremonial president he too must be a president even though he is unfit for the job.

Becoming a leader of a nation is not the same as getting a Video on Demand. Nana Bottom should be told bluntly that, he cannot become the President of Ghana just because of his obsession alone. Leadership can be learned if he really wants to be a leader. But when the person involved refuses to learn, he will never have that potential of becoming a leader. In fact, as long as some of us live on this planet earth, we shall make sure that Nana Bottom never realizes his obsession to become the President of Ghana on demand. Tufuakwa! It will never happen!

Throughout all generations, people with leadership abilities have inspired us with their humility and visionary leadership, changing our lives forever. Here are few exemplary leaders for Nana Bottom to learn from if and only if he is willing learn to become a leader.

In 1909, a little boy was born to Madam Nyaniba of Nkroful in Gold Coast. From a humble beginning he graduated from Achimota School in Accra. Whilst at Achimota School he met another humble man and a teacher, James Kwegyir Aggrey, a man who changed his life forever. Instead of being proud, arrogant and talking paatapaa like Nana Bottom, he was humble and ready to learn from James Kwegyir Aggrey.

He later left the Gold Coast to the United States to pursue higher education. During his student days in the United States, he was a shoe shine boy in Harlem, New York but that never stopped him from attaining his academic goals. In 1942, he earned a Master of Science in Education from the University of Pennsylvania, and a Master of Arts in philosophy the following year. He was elected president of the African Students Organization of America and Canada.

As a result of his personal achievements and visionary leadership, he was invited to become the full-time General Secretary of the first political party in the then Gold Coast which was formed in August 1947 by Paa Grant alongside others like Dr. J.B Danquah. That party was known as United Gold Coast Convention (U.G.C.C) and their slogan was “Self government within the shortest possible time”.

Due to ideological disagreement, this humble young man left the U.G.C.C. to form a more action-oriented and nationalist party called the Convention People's Party (C.P.P) on June 12, 1949. He proclaimed that the Gold Coast needed “Self-Government now”.

In January 1950, he was jailed for organizing a "Positive Action" campaign including civil disobedience, non-cooperation, boycotts, and strikes. Remember “Positive Defiance”, by former President JJ Rawlings which cost him the stripping of all protocols for seven years under Kufour's eight year rule.

Whilst in prison, his party the Convention People's Party (C.P.P) won a landslide victory sweeping 34 out of 38 elected seats in the Legislative Assembly. History recalls that Dr. J.B. Danquah, the flag bearer of the UGCC was freely campaigning everywhere during Dr. Nkrumah's imprisonment but because he lacked the requisite leadership vision like Nana Bottoms, he could not win a single seat, not even in his hometown. He only went to the Legislative Assembly on the charitable status of the Chiefs and People of his area.

That young man was Dr. Kwame Nkrumah who was not only the Founder of our nation but was also an international symbol of freedom for the oppressed. It was in that spirit that he led our beloved country to become the first black African country south of the Sahara to shake off the chains of colonial rule. His leadership from 1952 was unprecedented until that terrorists attack on Ghana on February 24 1966. Because of his visionary leadership, it was with no surprise that even in his death, he was elected “Africa's Man of the Millennium”. He did not achieve this height by going to town and ranting “Yen Akan fuor die” and “All Die Be Die”.

On July 18, 1918, a little boy was born in the small village of Mvezo, on the Mbashe River, district of Umtata in Transkei, South Africa. His father was the chief of Mvezo and by ancestral passage; he was being prepared to inherit his father after he joins his ancestors. Later in Alexandra, a Black suburb of Johannesburg, where he lived with his mother, he met Walter Sisulu a man who inspired him and changed his life forever.

In April 1994 when South Africa held its first historic multi-racial elections, he and his ANC party won 62% majority. On May 10, 1994, he made his inaugural presidential speech from the Union Building in Pretoria, South Africa. That humble young man is Nelson Rolihlahla Mandela. Nelson Rolihlahla Mandela did not go to town talking paa paa and ranting rubbish that “Every man has two” and “Yen Akan fuor die”. He used his common and logical sense to lead South Africa out of Apartheid.

In 1950, a humble woman who was a history and geography teacher was called to serve the poor and live amongst them in Calcutta. Instead of going to town and ranting arrogantly “Bottom, Bottom” and “Every man has two”; and that her father was once a ceremonial and not elected President, she rather inspired them with her actions. She had this to say: “There should be less talk and there should be more action on your part”. That humble woman was Mother Teresa. Today, she is a saint and millions of us worldwide aspire to be like her.

Ghana at 54 needs a mature leader who exhibits exemplary and visionary leadership as exhibited by Osagyefo Dr. Kwame Nkrumah, Nelson Rolihlahla Mandela, and Mother Teresa among others. Visionary Leaders, by their actions and not empty talk, bring water to the people and gives them hope. At this stage of our nation's life, Ghana does not need an arrogant, violent and paatapaa man whose only vision is his obsession to be the President of Ghana.

It is also strange that at this point of his political career, Nana Bottom just can't make up his mind. At this stage we can only summarize his performance with two words: “Nko Yie.” He is a totally confused, desperate and totally lost.

One day, he is attending some state function very late and asking people to recognize him with respect or not showing up at all as he did on Ghana's 54th Independence Day so that he can become the talking point. Another day he is at a funeral and instead of mourning a departed friend with respect and dignity as a matured man, he stands there calling his departed friend; “Bottom, Bottom”.

The next day, he is at Tamale rubbishing the allegations about his cocaine use and yet has refused to take a blood test to prove his innocence. Ask him to bring his hair strand for a laboratory test and he decides to shave his head permanently. Another day he is in London ranting; “fix economy, fix economy”. Today because the economy has been fixed and inflation is in single digit in just two years into NDC's mandate as compared to 8 years of NPP's failed attempts, he sneaked to Koforidua to start beating tribal war drums “Yen Akan fuor die” and Every man has two”. But who said “Every man has three”?

And did I hear Nana Bottom right when on Wednesday March 9, 2011; he declared that he needs ten years under his stewardship to transform Ghana? Akufo Addo should tell me what he takes the good people of Ghana for? Morons! Akufo Addo woke up that Wednesday morning and suddenly realized that indeed you cannot fix economy, fix schools, fix hospitals, fix cocaine and fix everything in two years and that President John Evans Atta Mills is not a magician after all.

Albeit Einstein was once quoted as saying that; “Great minds have often encountered violent opposition from mediocre minds”. This is the problem we now face in Ghana. Great and humble mind versus mediocre and arrogant mind. Prof John Evans Atta Mills, the President of Ghana is doing his best to realize his “Better Ghana” Agenda despite the continuously violent opposition he encounters from mediocre minds like Nana Bottom.

I say Albeit Einstein was right all along by what he said about Great and mediocre minds. One thing for sure is that the progress of Ghana towards a Better Ghana is the battle of Great minds and the brave. It is not the battle of mediocre minds and cowards who cannot think straight. Let Mr. William “Nana” Kofi Akufo Addo be told that Ghana would live beyond his vision of “All Die Be Die.”

May God Save Our Motherland.
By Charles Nkansah ([email protected])