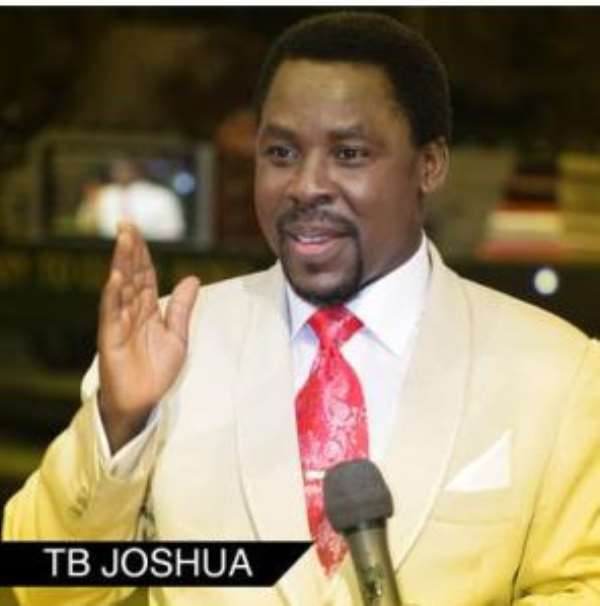 …An adulterer and a murderer- former 2nd in command

Ghanaian President, John Evans Atta Mills might have vouched for his healing prowess as rare divine gift; but snippets of information gathered from an interview that one Pastor Godswill Agomoh Paul, one time 2nd in command to Pastor Tomitope Balogun (T.B.) Joshua granted the highly read Nigerian magazine- Life Way, suggest that the General Oversee of the Synagogue Church of all Nations based in Ekotu Egbe, Lagos, Nigeria is fake.

Pastor Godswill Agomah, who was one time head of the Ghana Branch of the Synagogue Church of All Nations, blew the whistle to the Nigerian magazine which had sought his opinion over a video documentary where he (Pastor Agomah) and other devotees of the Church had accused their former boss of grand deception, manipulation and voodoo acts.

Although he gave many reasons for his actions, he told the magazine that what triggered his departure from the Synagogue Church was an attempt by T.B Joshua to use him to kill Pastor Peter Kayode, the first head Pastor of the Ghana branch of the Synagogue Church.

Pastor Kayode helped to establish the Ghana branch of the Synagogue Church in 1997 at Agbobgloshie, a suburb of Accra. He is currently the head of the Awakeners Chapel, situated at Kotobabi in Accra.

“My own assignment was to go to Ghana and bring Pastor Kayode dead or alive,” Godswill Paul revealed, adding, “I knew I could bring him (Kayode) back alive, but I did not know how to bring him back dead”. The Joshua order, according to Pastor Godswill Paul, was issued to him in 2004.

The grand Joshua scheme against Pastor Kayode, Godswill disclosed, included doing everything possibly within his power to get the Ghanaian resident permit of Pastor Kayode revoked by the Ghana Immigration Service, a situation, the pastor explained, would have compelled Pastor Kayode to return to Nigeria or relocate elsewhere. But that did not work. Why?

“I got some elders to get me Kayode's file from the immigration office. That was when I discovered he had married a Ghanaian lady and fathered two children from her. He had naturalized and established an NGO that the government recognized and even gave awards to for the work he was doing,” Pastor Godswill Paul declared, adding “I also discovered that Kayode had established Awakeners Chapel two years back. Every legal means of bringing him back was futile”.

According to Pastor Godswill, T.B. Joshua had recalled him from his Benin base, and asked him to bring back Pastor Kayode, who T.B. Joshua had accused of rebelling against him by establishing his own Church in Ghana at a time that Kayode was expected to help grow the Ghana branch of the Synagogue Church in Ghana.

But aside his legal stay in Ghana, Pastor Godswill told the magazine that after his abortive attempts to get Pastor Kayode back to Nigeria to continue his pastoral work at the parent Synagogue Church in Nigeria, he was convinced that Pastor Kayode had a genuine reason for being reticent.

He told the Nigerian Life Way magazine that Pastor Kayode suspected that T.B. Joshua was having elicit amorous affairs with his wife and that explained why Joshua prevented her from joining his husband (Pastor Kayode) in Ghana.

“From 1997 to 2004, Kayode's wife was in Lagos with Joshua in the Synagogue Church. She was never allowed to visit the husband in Ghana,” Godswill noted, disclosing further that when the wife eventually got to Ghana “the husband refused to sleep with her. Kayode was suspicious of the move (for her wife to relocate to Ghana) because Joshua had separated him and his wife for over six years”.

But Pastor Kayode, according to Pastor Godsill, would not budge. “When Kayode returned to Ghana he refused to come back to Lagos. Instead he went to establish his own church and many members followed him. From a membership of about 2000 only about 20 remained in the church (Synagogue Church of All Nations, Ghana). This infuriated Joshua”.

Joshua would then order Pastor Godswill to find any means possible to bring back Pastor Kayode.

“I tried to make contact in the military, but they told me they could not do anything. Even if he committed a crime he could not be repatriated. He would be charged and prosecuted as a citizen, I was told,” Pastor Godswill narrated.

He then decided on rugged and other unorthodox methods: “I decided to try the 'Nima boys. Coincidentally, that was the day that Kayode sent texts to the remaining few members of Synagogue on why Joshua was persecuting him. He disclosed that he re-married because he knew Joshua was sleeping with his wife. That text shocked me so much”.

So what did Pastor Godswill do next? According to him, he “took a member's handset and brought it to Lagos to show him (Joshua). He just dismissed it casually. His action not only shocked me, but also snapped me out of stupor. I knew Joshua; if that allegation had no truth, he would not have taken it lightly. He would go on the offensive with everything he had. It was at this point I began to think”.

Pastor Godswill continued with his narration: “I was in Lagos in his (Pastor Joshua's) office putting finishing touches to the crusade plan (in Ghana) when Lola, Kayode's wife, came into his (Joshua's) office. I noticed the lady was pregnant and I couldn't help but point out to him that the lady was pregnant. Again he dismissed me and commanded that I face the task on hand. After that, I felt very bad. It began to dawn on me that things were not what it seemed”.

(Read More on the issue on next Publication: The mysterious deaths at Synagogue Church and why Godwill has decided to speak now, although he left the church some four year ago)