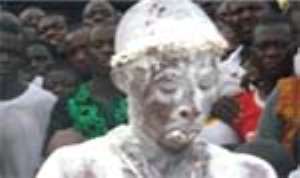 NANA KWAKU Bonsam, a renowned fetish priest based at Akomadan-Afrancho in the Offinso District of the Ashanti Region has disclosed that Rev Ebenezer Adarkwa Yiadom was lucky he did not show up for the proposed spiritual contest.

The fetish priest told DAILY GUIDE that he would have turned the founder and leader of the Ebenezer Miracle Center into a snake if the man had shown up for the spiritual battle which gained prominence in the media recently.

"Rev Adarkwa was lucky he did not show up for the spiritual competition, because I was fired up on that day to turn him into a snake, so people will recognize that he (Rev Adarkwa) is a fake man of God," he stressed.

The dreaded spiritualist disclosed that on the day of the supposed spiritual battle, all his 197 gods were on hand to exhibit their spiritual prowess.

"The gods, apart from Kofi oo, Kofi, had to leave when it became evident that Rev Adarkwa, who is also the chief executive officer of Radio Mercury in Kumasi, was not emerging for the show.

"The gods wanted to do something which was going to be difficult to be done by anybody in the country because of the insults and derogatory remarks they suffered unduly from Rev Adarkwa."

He mentioned that he was still keen on contesting Rev Adarkwa spiritually but due to the intervention of the Asantehene, Otumfuo Osei Tutu II, he had retreated.

"Who am I to disregard the wise counsel of Otumfuo whom I am committed to serving with all humility and loyalty," he indicated.

Rev Adarkwa not too long ago threw a challenge to the Akomadan-Afrancho-based traditional believer to show up for a spiritual battle at a proposed place to determine who was more powerful.

The challenge which was advertised on air was triggered by Nana Kwaku Bonsam's allegation that he had given black power to uncountable pastors in the country to establish their churches.

Though Rev Adarkwa's name was not mentioned as one of the pastors who had sourced juju from the famous traditional worshiper to establish a church, he became furious about Nana Bonsam's pronouncements and waged on-air war against the fetish priest.

In a bid to call the bluff of the fetish priest, the man of God called on interested event organisers to put together a spiritual contest between him and Kwaku Bonsam so that they could display their spiritual worthiness.

But strangely, when Fun Time Promotions, a Kumasi-based events promotion company accepted the challenge and organized the spiritual contest at the Jubilee Park on the 7th of last month, Rev Adarkwa failed to turn up for the show, although he was notified of the arrangements in advance.

Due to the non appearance of Rev Adarkwa for the spiritual show, Nana Kwaku Bonsam put together a spectacular show to appease the thousands of enthusiastic observers who had thronged the Jubilee Park for the proposed show.

Some of the wonders the traditional worshiper performed on that day included the conjuring of several hundreds of Ghana Cedis, Holy Bibles, and the planting of a palm nut seedling which germinated moments after being planted.

When he was being lambasted for not showing up for the challenge, Rev Adarkwa came on air to state that he did not dodge the spiritual contest, saying he was given the wrong information leading to his absence for the show.

"I thought the show was going to take place in Accra, so I went to Accra on that day. It was in Accra that I was told that the show was rather taking place in Kumasi."

Rev Adarkwa threw a fresh challenge to the fetish priest to meet him again at another proposed venue for the spiritual showdown to determine who was more powerful.

Though Nana Kwaku Bonsam was willing to accept the challenge, the show could not come off because of Otumfuo's intervention.

When the public condemnation against him refused to die down, Rev Adarkwa resorted to heaping insults and curses on people who were lambasting him.

Meanwhile, painstaking investigation conducted at the Kumasi Airport has revealed that it is never true that Rev Adarkwa travelled to Accra by air on the day of the contest.

Taxi drivers who ply their trade at the airport and some workers of the air station told this paper that on the day of the contest, they saw Rev Adarkwa roaming at the airport around 1.00 pm in his plush 4x4 wheel drive vehicle.

"It is not true that Rev Adarkwa came to the airport to board a plane to Accra. He came and stood here for sometime and after talking on his phone for a long period, he left the airport in his car," said one of the drivers who only gave his name as Master Cee.

Mankessim murder: Another suspect grabbed at Akwakrom
38 minutes ago