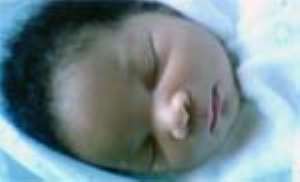 MADAM AGNES Agyapomaa, wife of Nana Kwaku Bonsam, the celebrated fetish priest, last Thursday, May 15, 2008 gave birth to a bouncy baby girl at the Holy Family Hospital in Techiman, as he donated cash to the Otumfuo Educational Fund.

The baby girl is the fifth born of the Akomadan-Afrancho based traditional spiritualist but the first child since he (Bonsam) became a fetish priest some six years ago.

Incidentally, Madam Agyapomaa was delivered of the baby girl at a Christian hospital, on the very day that her father stormed the Jubilee Park in Kumasi to engage Rev. Ebenezer Adarkwa-Yiadom, leader of the Ebenezer Miracle Worship Centre, in a spiritual contest to determine which one of them was more powerful.

Even though the bouncy baby girl is yet to be outdoored, enthusiastic fans of Bonsam have named her 'Yaa Bonsam', to match her day of birth and the popular accolade of the father.

According to information reaching DAILY GUIDE, Madam Agyapomaa, who had come from her base at Akomadan-Afrancho to the Ashanti Regional capital to give moral backing and inspiration to her beloved husband, went into labour on her way home, after the 'Man of God' failed to turn up, and was therefore rushed to the Holy Family Hospital where she gave birth to the baby girl.

Speaking to , Nana Kwaku Bonsam said he was extremely happy for the birth of his child at a time that his detractors were speculating that he was impotent.

"I thank God for this baby, because those who are speculating that I'm impotent have been shamed," the fetish priest on the block observed.

He said it was not for nothing that the baby girl was delivered on the day he was supposed to have contested a 'Man of God' in a spiritual battle.

The powerful traditional believer observed that the baby girl has been destined by God to do wonderful things.

"This baby girl will do wonderful things more than I," he stated.
He said he would give birth to seventy-one children before he leaves the earth.

Though he would not tell the number of wives he has, the well-known fetish priest said he has enough women to accomplish his mission.

In a related development, the Asantehene, Otumfuo Osei Tutu II, on Tuesday May 20 received Kwaku Bonsam at the Manhyia Palace in Kumasi.

The memorable visit, which was to pay homage to the Otumfuo was Kwaku Bonsam's second visit to the palace after a first one three days earlier to celebrate Akwasidae with the King.

Speaking at the brief but colourful ceremony, the fetish priest pledged to work conscientiously in protecting and defending the dignity of Asanteman at all times.

He as well promised to be loyal and dedicated to the service of Otumfuo and his subjects in general at any point in time.

He later donated an amount of GH¢1,000 to the Otumfuo Educational Fund, after he had presented some assorted drinks to the Otumfuo.

On his part, the Asantehene, who was in a perky mood, advised the fetish priest to be always guided by the truth and nothing else in his dealings.

He urged Nana Kwaku Bonsam to continue with his good works irrespective of the barrage of criticisms against him, and tasked traditional worshippers to always strive for the preservation and promotion of the dignity of traditional worship.

Otumfuo thanked the spiritual maestro for the visit and the fantastic performances he put up during the festival, and also assured the fetish priest of his support, saying the doors of the palace are always open to him.

Though the visit was not publicized, people who got wind of it besieged the palace to catch a glimpse of him.