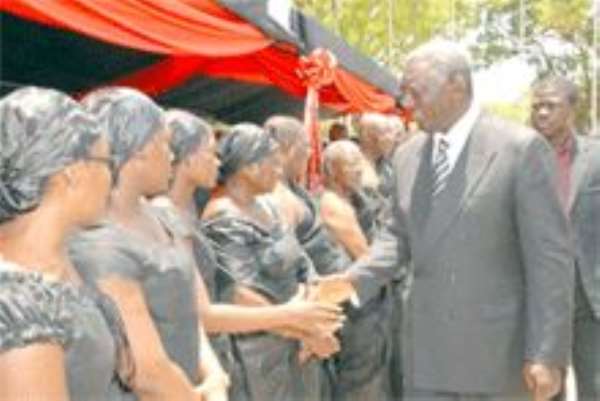 President J.A. Kufuor yesterday joined hundreds of mourners to pay their respects to Justice Edward Kwame Wiredu, a former Chief Justice, during a state burial service at the forecourt of the State House in Accra.

Justice Wiredu, 73, passed away on January 31, 2008 and left behind a wife, Emelia, nine children and 19 grandchildren. He served the Bench for 34 years and rose to become the Chief Justice from November 2001 to May 2003.


The Speaker of Parliament, Mr Ebenezer Begyina Sekyi Hughes, the Chief Justice, Mrs Justice Georgina Theodora Wood, members of the Council of State, Members of Parliament and Ministers of State were among the dignitaries who attended the service to bid Justice Wiredu farewell.


Others were the former Vice-President and flag bearer of the National Democratic Congress (NDC), Professor John Atta Mills, a former Speaker of Parliament, Mr Peter Ala Adjetey, the clergy, lawyers, judges and a delegation of chiefs and elders from Kumawu, the late former Chief Justice's home town.


The President, in a dark suit over a white shirt, was accompanied by his wife, Theresa.


Immediately he arrived at the service grounds, the President and his entourage went around to exchange greetings with the large number of mourners and to console the widow, Mrs Emelia Wiredu, the children and the extended family, before filing past the body of the former Chief Justice which lay in a silver-edged casket.


The arrival of the President set the stage for the burial service, officiated by the clergy, led by the Most Rev Dr Robert Aboagye-Mensah, the Presiding Bishop of the Methodist Church, Ghana. The service began with a song entitled “Oh God Our Help in Ages Past”.


The government, the widow, the children, the Judiciary, the Ghana Bar Association and the Thursday Class of the Methodist Church paid tributes to the memory of the Chief Justice.


Some common themes which ran through the tributes were that the late Chief Justice was honest and disciplined and had a taste for good appearance and that he would be best remembered for his judgements and the changes he introduced in the Judiciary.


The Attorney-General and Minister of Justice, Mr Joe Ghartey, who read the tribute by the government, said Justice Wiredu would be best remembered for the introduction of an automation system of recording in justice delivery (Fast Track High Court), the institution of continued judicial education and alternative dispute resolution (ADM).


The widow, Mrs Wiredu, in a tribute read on her behalf, said what attracted her to Justice Wiredu before the two tied the knot and walked the aisle was his impeccable appearance and good taste for quality dressing.


She said although his loss was painful, she was consoled by the fact that he accepted Christ Jesus as his Saviour.


Preaching the sermon based on Psalm 90:12, the Most Rev Dr Aboagye-Mensah advised people in positions of trust to remember that “it was appointed onto man once to die and after death judgement”.


A group of former students of Adisadel College, Justice Wiredu's alma mater, sang the school anthem and filed past the body.