Take advantage of the many business opportunities on offer - Kufuor 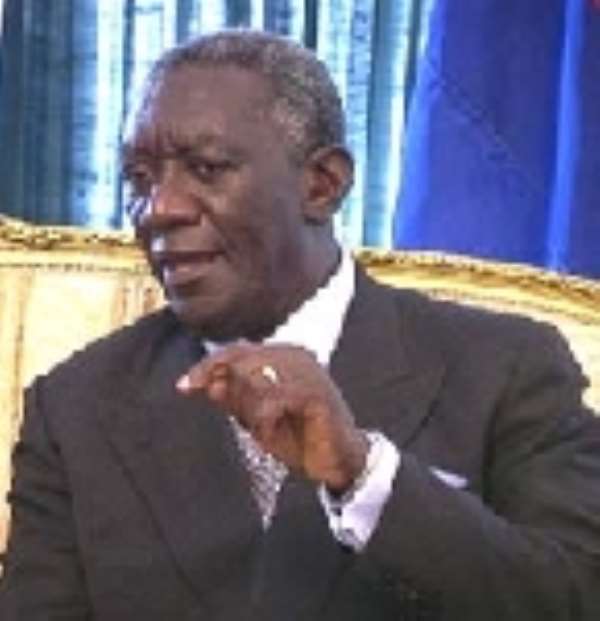 President John Agyekum Kufuor has challenged the country's private sector to take advantage of the many business opportunities on offer from Ghana's hosting of the African Cup of Nations (CAN 2008) Tournament.

He said the Government's bid for the tournament was made in the expectation that the sector would take full advantage of and exploit the immense business potential that came with it.

President Kufuor, who was inaugurating the Ghana 2008 African Cup of Nations Business Club at the Castle Gardens, on Tuesday, said: "It is not for nothing that bidding to stage international sporting events is now so competitive and attracts so much public notice.

The Club aims at preparing and organizing the Ghanaian business community to properly tap into the tournament's economic opportunities. It has set up a 25-member working group for the purpose.

The Club has various categories of members and this is determined by the contribution paid. Those who gave 400,000 dollars were classified as founding headline sponsors while those who paid 250,000 dollars become founding members with 150,000 dollars contributors made platinum members.

President Kufuor said it was time the public stopped seeing sports as only recreation or entertainment and recognized its business potential, as was the case in other parts of the world.

"In Europe today, advantage has been taken of the mass appeal and the emotional releases engendered by sports to transform clubs like Manchester United, Chelsea and Arsenals, all in Britain, into businesses with profit margins, which show in unbelievably huge salaries paid to footballers."

He noted that sports was a complete industry with opportunities for specialization in the manufacture of sports wear and equipment pointing out that, construction, transportation, communication, insurance and health care were among its other dimension with tourism and hospitality services including food and beverages, as well as off-field entertainment and cultural pageants adding to the list.

President Kufuor said he had no doubt that with the make up of the Working Group, and the organisations involved, the Club would succeed in adjusting the society and the traditional mindset to position all categories of businesses in Ghana to access the potential for brand and business development.

"Through CAN 2008, Ghana should be able to connect to the major centres of sports where also the business potential is very large indeed."

Dr Kofi Amoah, Chairman of the Local Organising Committee CAN 2008, said it was a jewel platform to unveil: "Our dynamic society and to showcase our business potential for investments."

The Agricultural Development Bank (ADB) presented a cheque for 400,000 dollars to become a founding headline sponsor.