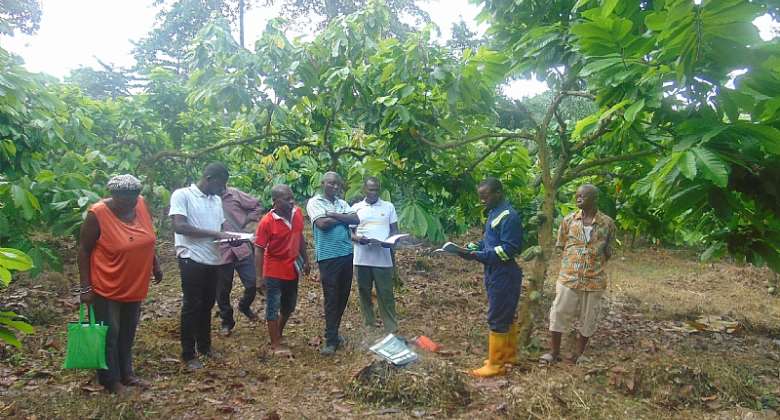 The Farmer Business School (FBS) which has been utilized to equip over 170,000 farmers since 2010 has the prime objective of ensuring that farmers are able to “take their farming as a business” which requires adequate planning, organizing, investment and technical-knowhow to be able to make profits. The FBS is composed of 12 modules (M) as follows:

In his welcome address, the Chairman of Nkonya Wurupong Yonkodor Cooperative Cocoa Farming and Marketing Society Ltd, Mr. Oliver Aglubi-Adzadu entreated the participants to take the training serious and endeavour to put up their best for it to be successful.

The District Extension Coordinator for Hohoe Kpeve District, Mr. Derrick Alarbi-Donkor underscored the significance of FBS. “When it comes to certification of cocoa, awarding for best cocoa farmers, COCOBOD is keen on who have enrolled in FBS,” he stated.

Mr. Alarbi-Donkor used the opportunity to congratulate Nana Owusu Ansah, a cocoa farmer in Nkonya Wurupong, who was adjudged Regional Best Cocoa Farmer 2022 for Volta Region. "This is a recognition of your efforts and encouraged the farmers to work hard in their farms."

The Extension Officer in the area, Francis Eshun reiterated that “according to Cocoa Health and Extension Division (CHED) strategic goals 2020-2025, goal 2 states "to improve farmers’ Knowledge, Attitudes, Practices and Aspirations (KAPA) for increased yield of 1500kg/Ha by 2025”. For such a goal to be attained, Mr. Eshun continued will “require consistent effort and training, of which FBS cannot be underestimated”.

Day after day, Mr. Eshun took them through the 12 Modules systematically using the discovery teaching method. It was discovered that planning is the first thing to do as a farmer. Also, if a particular crop fails to bring profit after the season, the farmer may have to abandon the crop or change the technique. In the case of cocoa, it was discovered that technique such as pruning, fertilizer application, using improved variety and so on can be changed.

On the third day, using the booklet, “Doing good business with cocoa”, Mr. Eshun took the participants to a nearby farm belonging to Madam Juliana Yempew. Through demonstration and discussion, the process of growing quality cocoa, right from land preparation, lining and pegging, planting of young cocoa, weeding, control of insect pests, pruning, fertilizer application, harvesting, fermentation and drying were discussed using real objects (the cocoa farm). The farmer discovered that the “30x30 (30 square used the area to measure their farm, where 3 cutlass length equals 1 and 1x30 makes one side of the 30x30 is roughly 180ft x 10ft, which is less than 210ft x 210ft (an acre).

Ms. Lucy Dagba, Extension Officer for Kpando area took the farmers through M11&12 on the final day of the training. “The best method of farming is mixed farming- raising animals and growing crops,” she reiterated. The farmers discovered the interdependent role of animals in crops and vice versa in terms of feeding and fertilization. Farmers also discovered that “one apple a day will keep you away from the doctor”, thus enforcing the role of fruits and vegetables in their diets. She encouraged farmers to continue to prepare balanced nutrition for themselves and their family, so they can remain healthy.

In his closing remarks, the Chairman of the Nkonya Wurupong Yonkodor Cooperative Cocoa Farming and Marketing Society Ltd, Mr. Oliver Aglubi-Adzadu thanked COCOBOD and Extension Officers for the training and assured the beneficiary farmers will make good use of the knowledge acquired during the training.