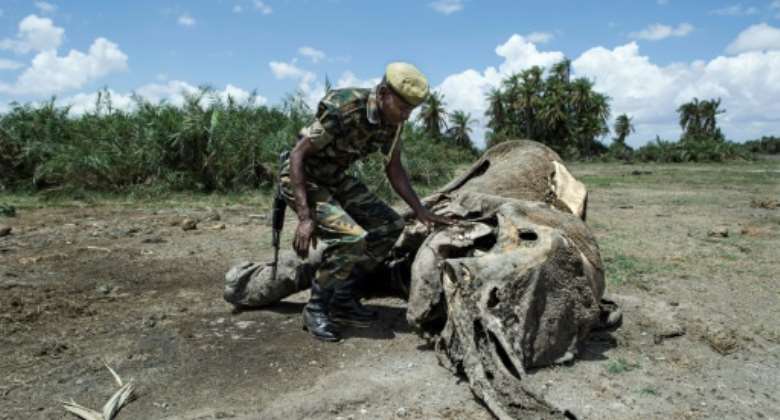 In southern Kenya's famed Amboseli National Park, the signs of the drought are everywhere. By Tony KARUMBA (AFP)

As he peers at the carcass of the young elephant, Kenyan park ranger Josphat Wangigi Kagai says such disturbing sights have become all too familiar -- a reflection of the vicious drought sweeping across the Horn of Africa.

"I used to wear a face mask because of the smell of rotting animals, but now I am used to it," the 37-year-old told AFP, his voice thick with sadness.

In southern Kenya's famed Amboseli National Park, flanked by the majestic Mount Kilimanjaro, the signs of the drought are everywhere.

The earth is dry and cracked, animal bones lie along the trails and emaciated trees with yellowing leaves bear witness to the impact of the worst drought in 40 years.

Rangers use axes to remove elephants' tusks to prevent poachers from taking them. By Tony KARUMBA (AFP)

"For the past few weeks, we've been doing this almost every day," he said, using an axe to remove the animal's tusks to prevent poachers from taking them.

"It makes me feel so sad," said the Kenya Wildlife Service (KWS) ranger, who has worked in the park since 2016.

'Everything is wiped out'

Poor rainfall since late 2020 has devastated the Horn of Africa, raising fears of a famine in Somalia and plunging around four million Kenyans -- nearly 10 percent of the population -- into hunger.

Hundreds of elephants, wildebeest, zebras and giraffes have died because of the drought this year. By Tony KARUMBA (AFP)

Wildlife has also paid a heavy price, with 205 elephants, 512 wildebeest, 381 zebras and 12 giraffes dying from the drought between February and October this year, according to Tourism Minister Peninah Malonza.

The pastoralists living in Amboseli -- a park whose popularity is rivalled only by the vast Maasai Mara -- know the damage caused by climate change first hand.

"Before the drought you could see herds of elephants roaming around this area, they are nowhere to be seen now," said Kelembu Ole Nkuren, a Maasai shepherd who has called Amboseli home since birth.

"Everything is being wiped out right now, zebras, wildebeests, giraffes, elephants. I have never seen such a huge number of dead wildlife," the 35-year-old told AFP, surrounded by the rotting remains of buffaloes, antelopes and other animals.

"If the drought goes on like this, it will wipe out the remaining cattle, elephants, all the animals," he warned.

According to Norah Njiraini of the Amboseli Trust for Elephants, more than 100 tuskers -- out of a total of 2,000 -- have died since June in the park, which borders Tanzania.

The last time elephants suffered such a devastating fate was in 2009, she told AFP.

"In 2009, we lost the female adults... this year is different because we are losing the young ones," she said.

Park rangers are making efforts to help the animals, supplying hay for them to feed on. By Tony KARUMBA (AFP)

The memory of that drought still haunts many in Amboseli.

This time, the KWS is taking efforts to ensure that the animals have a better chance of survival.

In Amboseli, wildlife can feed on hay supplied every two days by park rangers.

In Tsavo East National Park, about 140 kilometres (85 miles) to the north, KWS has drilled wells so animals have water to drink.

Despite these measures, that park lost 54 elephants between February and October this year.

Few expect conditions to improve anytime soon, with forecasts indicating yet another failed rainy season on the way. By Tony KARUMBA (AFP)

Even with some recent showers, few expect conditions to really improve anytime soon, with forecasts indicating yet another failed rainy season on the way.

The economic consequences for the tourism-dependent nation are not lost on park officials.

"When we have visitors coming to the country, our main backbone is basically wildlife tourism," the director of Tsavo East, Kenneth Ochieng, told AFP.

"So when the numbers depreciate, it becomes the concern of every Kenyan."

Despite the grim forecast, he remains hopeful, he said.

"The problems we are going through are man-made and the solutions should also be man-made."