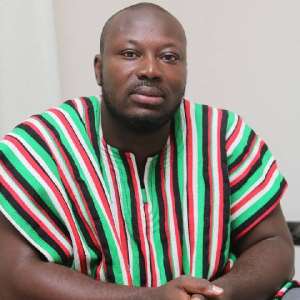 The office of the Youth Organiser is a very strategic wing of the party, and for that matter, the portfolio requires persons with sufficient political intellect and operational abilities to superintendent such an outfit. Successive Youth Organisers at the national level have contributed their quota in making the youth wing formidable, however, it is important to point to the exceptional and distinctive leadership qualities of Lawyer George Opare Addo.

What distinguishes Lawyer George Opare Addo from his compatriots and predecessors is his selflessness and his deep understanding of modern-day politics. Indeed, his quest to empower the youth wing and, to provide them with the requisite political skill for effective mobilisation is worthy of high praise.

His unalloyed commitment to serving the party, particularly the youth wing is highly commendable.

Hon. George Opare Addo, the National Youth Commander of the National Democratic Congress has succeeded in rebranding the youth wing of the party; a promise he made in the run-up to the 2018 National Youth Conference at Gomoa in the Central Region... and this, he achieved through; - advocacy and mobilisation

- orientation and capacity building for the youth organisers at all levels. - resourcing and retooling the youth wing.

The Opare Addo-led Youth Wing of the NDC is now a formidable and impregnable fortress of the party. His advocacy on the philosophical position of the party is not only beneficial to the youth wing alone but the larger party members. Today, the average youth organiser of the party can advocate and promote the party in an outspoken manner. It is only self-seeking, and inexperienced political neophytes who would deny this glaring and ubiquitous fact.

A number of the youth organisers having benefited from the Pablo Project(PP) in the area of orientation and capacity building can only be grateful to their Commander. Those of us from afar who have seen the good works of Pablo can only be grateful to the delegates who voted for him to lead the Youth Wing in 2018, and I'm outrightly hopeful, that, the ever-rewarding delegates of our party will reward Pablo by renewing his mandate to complete the Pablo Project and deliver a resounding victory in the 2024 general elections.

Pablo has committed a lot of energy, and resources to the party, it is, however, unthinkable for anyone who has the party at heart to sponsor a media attack on him. Especially when those attacks are based on blunt falsehood and palpable lies.

The NDC does not have the luxury of time to experiment with the 2024 elections. We need tried and tested individuals to fight the 2024 battle. Pablo has laid a solid foundation and needs to be given the overwhelming endorsement to complete what he has started.

The era where people think machoism and appearance on radio and TV should be the basis for qualification for sensitive and strategic party positions is over. The real work is on the grounds and is more scientific. It requires persons who have the knack for research and sufficient organisational abilities and not radio rantings. The Pablo Project must continue unabated.

Today, our Tertiary Education Institutions Network is highly attractive and motivated for party work. Hon George Opare Addo has left an indelible mark on our various campuses as far as TEIN is concerned.

I have no doubts in my mind that the delegates will retain Pablo to continue his good works I'm enjoined to write this because of the vile propaganda against him. Why would Pablo commit his time, energy and resources to make the party attractive only for people to sponsor a wicked media attack on his persona?

Anybody who has the NDC at heart would never connive with a journalist to bring a comrade down all in the name of internal politics. The time and energy being spent to unjustifiably tarnish the image of a comrade could be used to strengthen a branch or two.

Pablo will go down in the annals of the party's history as the most successful Youth Commander of the party. You do not need to like him to admit to this saddle-sore reality.

The average voter who is disappointed in the NanaBawumia self-seeking administration will be disappointed in us if the only time we show aggressiveness and steadfastness is during internal elections, but go to sleep on a simple collation exercise during the general elections.

Our posture and conduct should give the average voter, particularly the youth hope, and demonstrate to them that when given the opportunity, we would be committed to work to rescue the citizens from the excruciating economic hardships the NanaBawumia administration has subjected all of us to.

I wish to therefore urge you, Lawyer George Opare Addo to maintain your composure and calm disposition - and pay little attention to your detractors. The task ahead is humongous and we cannot fail Ghanaians.

Those of us outside the youth wing who have seen your notable achievement can only be grateful to you and the profoundly wise delegates who gifted you to the NDC party. In my considered view, you have satisfactorily carved out a niche for yourself as a quintessential advocate.

The Pablo Protect is not only beneficial to the youth wing, but to the party at large, and for that matter all of us should come together to support the project.

We cannot afford to change the horse in midstream.