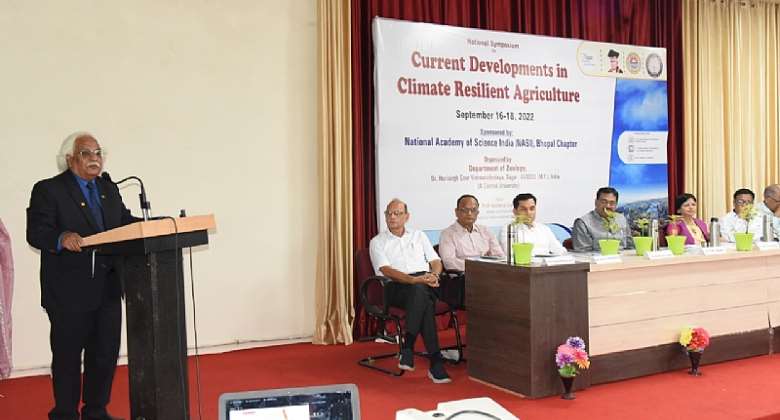 “As India advances to become one of the largest economies of the world, it would be absolutely necessary for a populous country like India to pay a renewed attention to an integrated development of both the rural as well as the urban areas. Mere focus on urbanisation would not suffice, we need to search for new development models for [email protected] and surely for [email protected] for creating ‘Rural Clusters based Growth Engines’ for inclusive economic resurgence of the New India” said Kulpati Prof PB Sharma, while inaugurating the National Symposium on Recent Advances in Climate Resilient Agriculture and Climate Change organised by Dr Hari Singh Gour University (Central University), Sagour in Madhya Pradesh.

We badly missed the second and third green revolutions, that could have modernised our agriculture to sustainability and boosted the rural economy. India is the world's largest producer of milk and pulses (dry beans, lentils, and chickpeas) and is the second-largest producer of rice, wheat, sugarcane, fruits, vegetables, cotton, and groundnuts in the world. But, despite achieving self-sufficiency in grain production, India still continues to remain heavily dependent on monsoon and its low productivity is dictated by the inefficient use of limited resources, resulting into crop yields below the global average. What more, the shortcomings in infrastructure, distribution and marketing system have caused post-harvest losses of up to 40% for some crops, including wheat fruits and vegetables. Much of this loss is due to excessively heavy rains in some parts and draught in other areas The Government of India has a National Mission for Sustainable Agriculture, as part of the National Action Plan on Climate Change that is aimed at addressing the risk associated with climate change by devising appropriate adaptation and mitigation strategies, ensuring food security in the country. Despite all these healthy developments, the agriculture sector still remains as one of the most stressed sectors in the country. Agriculture is a major employer of our rural work force and is the backbone of our nation’s economy and a strong pillar of food security for our 1.4 billion plus people. This is a sector that requires a great care and support of innovative technologies for its rapid transformation on the pathways of sustainable and climate resilient agriculture, said Prof PB Sharma, an eminent academician who is the past President of Association of Indian Universities, AIU, founder Vice Chancellor of DTU and RGPV and currently the Vice Chancellor of Amity University Haryana.

Due to rapid growth of industrialization, urbanization and economies, the entire world is under the threat of rise in global average temperature, global warming and climate change. These consequences are due to the extensive use of fossil fuels such as Coal, Petrol, Diesel and Natural Gas for transportation and power generation, and use of Furnace Oil in industries, large amount of methane contributed by the agriculture sector and massive deforestations that has largely contributed to the emission of greenhouse gases (GHGs), responsible for increase of atmospheric temperature and green house effect. These dire consequences are causing climate change and adversely affecting the agriculture yield in nations around the world, including India. What more, due to poor awareness and lack of availability of innovative technologies, the agricultural sector continues to contribute to the degradation of air and water quality due to crop residue burning and unmindful use of pesticides and fertilizers. While water remains as one of the major natural resources for agriculture (almost 85% of total potable water is used in agriculture in India), there is still a total lack of water conservation measures in Indian agriculture and as such it remains as one of the most water stressed sectors in the world. Extensive use of groundwater in agriculture has further led to depletion of groundwater resources resulting in deepening of groundwater levels in most parts of the country. The situation is surely alarming as the map of water stressed India to the right, so clearly depicts, opined Prof Sharma.

The challenges of global warming and climate change are to be met through the judicious application of water technologies in agriculture through smart-water technologies. There is an urgent need to address the challenges of increased food production, improving quality of life of the rural people and also to address the challenge of water and energy security in India. The twin challenges of achieving the goal of sustainable agriculture and mitigating climate change are to be met with implementable policies and actions on a war footing. The focus of these policies should be to promote sustainable use of water resources, effective water management systems and to promote high tech Agri-Tech solutions in a big way to relieve the pressure of water security while at the same time boosting both the quality as well as the yield of agriculture produce, said Prof Sharma while addressing a large number of Agriculture and Environment scientists attending the National Symposium, organized under the leadership of Dr Neelima Gupta, Vice Chancellor of the prestigious Dr Hari Singh Gour University, Sagar and her eminent team comprising of Dr Subodh Jain, Organizing Secretary and Dr Shweta Yadav, Chief Coordinator. The inaugural function of the symposium was also addressed by Dr SK Varshney, Advisor DST, Govt of India, Dr AK Pandey, Vice Chancellor Vikram University Ujjain, Dr Sudhanshu Yadav, DFO Sagar and Dr Shivesh Pratap Singh, Secretary NASI and was attended by a large number of young research scholars from various universities in India.

Highlighting the importance of integrating major advancements of information technology such as Artificial Intelligence and Machine Learning, Prof Sharma advocated that "We need to go Rural with a High-Tech Mind and with Scientific Solutions” to build a New India of our dream in which the Rural India shall be a vibrant growth engine of India’s economy that shall meet the twin challenge of heralding the climate change and boost the rural economy to enable India’s march on pathways of inclusive and sustainable development.

I am of the firm view that mere urbanization based economic and industrial growth would not suffice for a country like India which has a large population in its rural sector. The exodus of rural population to mega cities, while depriving rural India of its legitimate contribution to nations agro-industrial economy, has already caused mega cities and towns great stresses and raised great slums of poverty in and around the cities of India. Strategies for [email protected] in 2027 require a major shift in our approach to planning for the New India. What India needs that alongside with SEZs in urban areas, we need to create Rural Clusters of SEZs to promote whole lot of industries including Food Processing and Food Technology, IT Call centres, Greentech, High-Tech Agri-Tech, High-Tech Herbal Technology and also High-Tech Handicrafts and Social businesses which together with urban clusters of economic growth engines shall fast track Indian economy to achieve the goals of sustainability and inclusivity.

Increased use of land, irrigation and agro-chemicals played a major role in the growth of agricultural production during the Green Revolution in India. However, it is now recognized that the gains of Green Revolution were often accompanied by negative effects on natural resource base, including land degradation, salinization of irrigated areas, over-extraction of groundwater, the build-up of pest resistance and the erosion of biodiversity. Agriculture has also damaged the wider environment through deforestation, emission of greenhouse gases and nitrate pollution of water bodies.

As per the UN Food and Agriculture Organisation, UN FAO Report 2021, the world’s population would reach 9.73 billion in 2050. As such in sub-Saharan Africa and South Asia, the agricultural output would need to be more than doubled by 2050 to meet the increased demand of food and vegetables. In the rest of the world the projected increase would be about one-third above the current levels. This monumental challenge of food security is to be met through sustainable agriculture and by taking the challenge of soil regeneration and rebuilding the highly water stressed areas, besides the mitigation of climate change.

India has been facing tremendous challenges of declining of agriculture productivity over the last few years. The estimated impacts of climate change on cereal crop yields in different regions of India indicate that the yield deficit could be upto -35% for Rice, -20% for Wheat, -13% for Barley and -60% for Maize depending on the location, future climate patterns; etc.

Water Conservation an absolute must for Sustainable Agriculture

Water can be considered as a strong indicator for agriculture sustainability and economic prosperity. 70% of the Earth’s surface is covered with water but 97.3% of the total water on the Earth in saline and only 2.7% is available as fresh water. Almost 85% of water from different sources in India is used for agriculture purposes. The impact of global warming on climate change has affected regional hydrological cycle and thereby water resources which reduce the availability and reliability of water supplies in various need-based demands. Finally, such situations create threats of water security. We need new and innovative technologies for agriculture and for water conservation in the agriculture sector.

India has a geographical area of 329 million hectares which amounts to 4000 billion cubic miles (BCM) of water from annual precipitation. Due to large spatial and temporal variability in the rain fall, the distribution of water resources is highly skewed in India. It is projected that by 2050 India would require almost 50% more water for its agriculture, 1072 BCM as against 688 BCM in 2010. Unless water conservation measures are adopted in a big way in agriculture and the increased attention is paid to extensive water harvesting, treatment and recycling of wastewater and increasing water storage capacity, India shall end up in great stresses for water and food security,

Food and Water security are two major goals that we in India, being a populous country, must keep as our high priority goals for building New India of our dream. Sustainable agriculture shall thrive on our success to implement innovative solutions for water conservation in agriculture alongside with extensive rainwater harvesting and ground water recharge. We need to put in place water smart agriculture technologies and ensure their increasing use in rural India both for boosting the agriculture productivity as well as improving the water table in rural India.

There is strong case for High-Tech Agriculture utilizing a minimum of water resources and yet maximizing productivity and quality of nutrients in Agriculture produce. Sustainable agriculture is intrinsically associated with increased used of green energy and green technologies in various sectors of nation’s economy. As such, mass entrepreneurship is possible in rural India that shall create million of jobs and support the cause of inclusivity.

Increased forest cover goes a long way in creating great sinks of carbon dioxide, as such social forestry and plantation drive in rural areas should be promoted as a good social business. There is of course a great opportunity for plantation and eco-farming along both the sides of highways and expressways and along the rural and urban roads in India.

To ensure high sustainability in agriculture, not only water but also other key components like, natural fertilizers, natural pesticides and innovatively designed farm machinery need to be promoted as local industries, this will also create millions of jobs in rural India besides promoting organic farming.

For Promotion and adoption of climate resilient strategies, the Government of India and the State Governments and the Corporate should fund innovative ‘research for development and AgriTech innovations in our universities and colleges in India and support the startups in water efficient agriculture technologies, said Prof Sharma who concluded his inaugural address by quoting Prime Minister Shri Narendra Modi Ji who said while addressing the India Economic Convention 2014 at Delhi “We must build an agenda for speedy, yet sustainable economic growth that is inclusive for all, is respectful for individuals, responsive to innovations and responsible towards the future generations”. We need to ensure that we implement this agenda with all sincerity and commitment to build India of our dream.