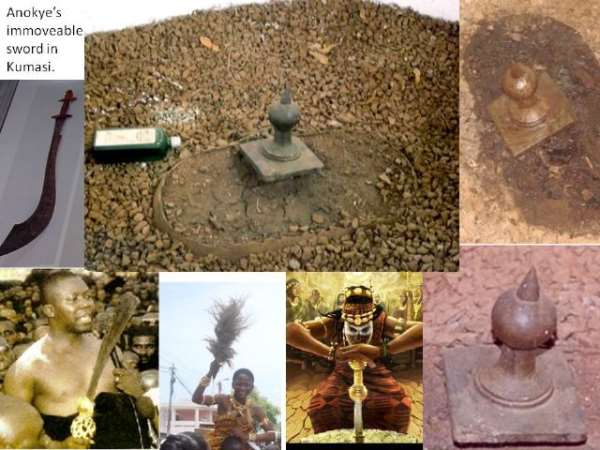 I was quite impressed by the article written by Kofi Akosah-Sarpong titled, 'Politicians, Spirituality And Development'; (Ghanaweb.com October 28), regarding how nations have been brought forth and sustained in governance, by the power of myth and religion; to provide this short account of Okomfo Anokye whose tactics the writer correctly places at the pinnacle and as an example ( most worthy of emulation), of how successful nation-builing and governance are articulated.

In spite of, or perhaps because of his generally acknowledged incredible achievements, the origin of Okomfo Kwame Anokye Frimpon Kotobre, popularly known as Okomfo Anokye, like his “death” is shrouded in myth and mystery. In 1921, Nana Kwadwo Apau, Chief of Agona and “direct descendant” of Okomfo Anokye recounted the ancestry to the English anthropologist R.S. Rattray, that curiously linked Okomfo Anokye's ancestry to Otumfuo Osei Tutu I.

Similarly, at Awukugua, Akuapem in Ghana's Eastern Region, there are “descendants” of Okomfo Anokye who are adamant that the Great Priest was born at Awukugua and “comes from Awukugua”. I have viewed a video tape of that statement from a friend who happens to be from Awukugua.

I will not go into the merits of either claim here. I will only say that had Okomfo Anokye remained at Awukugua, he would have been merely remembered as a great priest who climbed a tall palm tree with his sandals on; and who also carved a traditional game of Oware out of a huge slab of stone with his bare fingers. Both items are still extant in Awukugua, and draw endless visitors to the town.

However, by befriending Barima Osei Tutu at Akwamu (much closer to Awukugua, than Agona in Asante!), in the 1680's, Okomfo Anokye became “the catalyst through which the project of the (Asante) state in time (history) is given definition and launched on its way”, as one historian has eloquently put it.

One thing is certain and irrefutable about Okomfo Anokye. He was a friend of the then Barima Osei Tutu, and both of them lived at Akwamufie, the capital of Akwamu. Osei Tutu, a royal of the Oyoko lineage of Kwaman (now called Kumase) had been sent to the court of Nana Ansa Sasraku, the King of Akwamu to learn statecraft.

Upon the death of his uncle Obiri Yeboa, Osei Tutu was summoned to Kwaman to assume leadership of the Oyoko clan of Kwaman. Legend has it that upon realizing his mistake in allowing Anokye to travel with Osei Tutu, Ansa Sasraku sent his men after the group. With the spiritual support of Okomfo Anokye, Osei Tutu was able to turn away their pursuers. Thus, began the legend of Okomfo Anokye, and the successes he attained together with Osei Tutu.

Upon becoming the chief of Kwaman, Osei Tutu made Okomfo Anokye his chief advisor in all matters. Every military or diplomatic success was attributed to the magical powers of the great Okomfo Anokye. His fame extended far and wide, and the magical things he could do were innumerable. Among other incredible deeds, it was said that Okomfo Anokye fetched water in a basket, and yet the water did not spill! Okomfo Anokye's house was without a roof, and yet it was sheltered from the rain!! Okomfo Anokye could dissect an ant and expose its intestines!!! (As a child, I recall singing the great deeds of Akomfo Anokye which had been turned into a song!).

As Okomfo Anokye's fame and influence grew, so did the need to create a powerful kingdom that would unite the Asante, as a prelude to the unification of all the Akan. With the defeat of Denkyira, then the most powerful kingdom, by Asante-speaking forces under Osei Tutu, the idea of a new united kingdom of Asante became a reality. To this end, Okomfo Anokye invited the various independent and fragmented Asante Chiefs to an important meeting one Friday in Kumase, the new name that Okomfo Anokye gave to Kwaman.

The meeting was held at Dwabrem, which was situated at the present site of the Kumase Post Office, in 1701. Okomfo Anokye whose mystical powers and his role in the defeat of Denkyira had made him a recognized and unquestioning authority, told the Chiefs that he was about to command a Stool from Heaven, with the powers given to him by God. He added that the Stool will rest on the lap of one of the assembled Chiefs. He made the Chiefs agree and swear by Oath that the one upon whose lap the Stool from Heaven rested would become the King of the new Union.

It was a Mount Carmel (Bible's Old Testament), type of assembly. Here was Okomfo Anokye, impressing upon the assembled Chiefs and people that the powers he assumed from his God were more potent than whatever gods the individual Chiefs claimed to acquire their symbols of authority from. Lo and behold, the Stool commanded from Heaven landed safely onto the lap of Nana Osei Tutu. The Stool was laden in Gold, it arrived on a Friday; so it was given the splendid name Sika Dwa Kofi, or Friday's Golden Stool. Every Asante child knows this story, and it is passed on from generation to generation.

Okomfo Anokye created lesser Stools for all the other Chiefs. In this manner, no Stool in Asante could claim to have preceded the great Golden Stool. What political mastery and strategy! What political wisdom!! What symbol of unity and nationhood!!!

Just to underscore the historical fact: My own several times great-grandfather Obrempon Nana Firam Gyereba, (Asuonwunhene), was present at that momentous occasion. He was the main gunner or “Tufuo” protecting Otumfuo Osei Tutu I and Sika Dwa at that very moment of the birth of Asante at Dwabrem. He had accompanied Osei Tutu to Denkyira and Akwamu as one of his seven military guards. Okomfo Anokye created a Stool for him that very Friday evening as he did for all seven military guards who had served him in Denkyira and Akwamu. This led to the establishment of the powerful Kumase Ekonti Division, also known as the “Atuo Nson” or the Seven Gunners. The Bantamahene is the head of the Kumase Ekonti Division. According to the historical record, Okomfo Anokye was rewarded with the Stool of Agona by Nana Osei Tutu for services rendered to Asante.

Okomfo Anokye helped in instituting other symbols of authority and unity for Asante such as the annual Odwira festival, at which observance, the Asantehene gave a state of the Union account to all Asante. The Odwira served to rekindle the spirit of belonging among all Asante and a dedication to serve Asante better the coming year.

Okomfo Anokye was also a great Law-Maker and Law-Giver. He is reputed with giving Asante a set of codes known as “the Okomfo Anokye Seventy-Seven Laws”. It covered everything from birth and child rearing; observance of puberty rites; sexual relations; installation of Chiefs; the governing of the nation; to death and burial rites. Even today, in Asante, whenever a grandmother advises that something is a taboo, the grandmother is unwittingly referring to one of Okomfo Anokye's codes of conduct. Such was the political and legal acumen of the great Akomfo Anokye.

Given his supernatural powers and achievements which are still visible today, and validated by the pomp and pageantry of Asante; as well as the entrepreneurial spirit of Asantefuo; Okomfo Kwame Anokye Frimpon Kotobre could not be expected to die a natural death! Death could not conquer him. Legend has it that the Great Priest left specific instructions to his nephew and eventual successor as Chief of Agona, Kwame Siaw Anim. The instructions were that the Great Priest would be traveling in the spirit world for Seven days, after falling into a deep trance, to search for a cure for Death, after which he would re-enter his human form. During the course of the seven-day waiting period, the nephew, impatient to inherit the Stool and all the wealth accumulate by his uncle Okomfo Anokye; pronounced his uncle dead, and presided over a 'noisy funeral'; as the historian T.C. McCaskie eloquently puts it in his book “State and Society in Pre-colonial Asante”.

During the course of the funeral, as related by McCaskie, Okomfo Anokye in his human form appeared at the outskirts of the town. He met a hunter from Gyamase (a nearby town), who upon the Great Priest's enquiry as to the commotion at Agona answered that a greedy nephew of Okomfo Anokye had disobeyed his uncle's instructions and had pronounced the Great Priest's death, hence all the commotion at the funeral in Agona.

Okomfo Anokye revealed himself to the hunter, and gave him a medicine called “Nkontwima” for the hunter's own prosperity. Okomfo Anokye also gave the hunter a message that he had found a cure for Death, but to tell the people of Agona and Asante that because of his nephew's greed, the cure will be withheld from them forever! The lesson in this story is that calamity follows upon wilful disobedience of Okomfo Anokye's instructions! This explains why in Asante traditional matters, every word and instruction given by the Great Priest are accepted as gospel. Further, claimants to Asante Stools legitimize their claim by appealing to the role of Okomfo Anokye thereof.

After the encounter with the hunter, the great Okomfo Anokye disappeared. Folks, Okomfo Anokye did not die, he simply disappeared, and that is what our history says! To this day, nobody can tell where that Okomfo Kwame Anokye Frimpon Kotobre was buried. Whatever Okomfo Anokye provided to the hunter is today part of the heirloom of the Chief of Gyamase.

The great things that Okomfo Anokye did are still extant for people to see: the Golden Stool, the buried Sword at the present Komfo Anokye Hospital in Kumasi; the palm tree he climbed with his footmarks still evident in the bowels of the tree; the Oware game carved out of a huge slab of stone with his bare fingers, at Awukugua; and numerous others, not least the pomp and pageantry of Asanteman.

Upon reflection, it is sad that of late some of our misguided Ghanaian Christian Pastors and other similarly misguided people, have taken to deriding the achievements and personality of Okomfo Anokye as idolatry and anathema. It is this sad reality due to the colonization of the African mind that concerns me. In every corner of the globe, people respect their tradition and culture in spite of so-called “modernity”. Other cultures still regard similar feats as the gospel truth. To wit: Moses received Ten Commandments from Heaven and resulted in Judaism; a virgin birth of Jesus resulted in Christianity; Mohamed's vision led to Islam; think about Buddha and Buddhism; or Hinduism and its prophets; in the United States, Joseph Smith had a 'vision' in the 1820's in New York and that led to the birth of the Church of Jesus Christ of Latter Day Saints or Mormons. Examples are legion. It is only Africans who tend to undermine and disrespect their own culture while hanging on to the “truths” of received ideas from foreign lands.

I have never heard a white Christian Pastor condemn Julius Caesar or any of the Roman and Greek gods. Rather, the collapsing temples of Greek and Roman 'idolatry' are promoted as national treasures, visited by Popes, Cardinals, Pastors, Christians and countless tourists. I wonder if one cannot be an African Christian, and yet remain respectable of what his ancestors accomplished, just as Europeans seem to have done. Why should some African Christians view Chieftaincy and its regalia as idolatrous, when the white missionaries who converted Africans to Christianity were sent to do that job with the blessings of their Queens and Kings? Okomfo Anokye never met any Christian missionary, black or white. He accomplished his task by his God-given talents. In the least, we must revere him, and in so doing show respect to ourselves and to our customs and to our tradition. Views expressed by the author(s) do not necessarily reflect those of GhanaHomePage.