Russia and China pledge to be counterweight to US 'dominance' 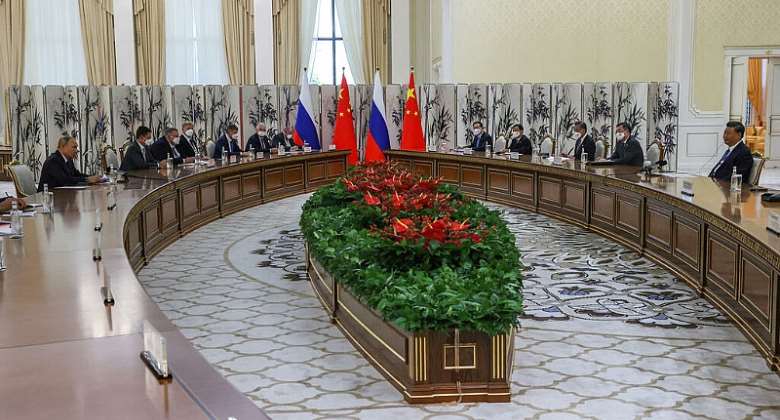 Russian President Vladimir Putin and Chinese leader Xi Jinping have met for their first face-to-face talks since the start of the conflict in Ukraine, hailing their strategic ties in defiance of the West.

The two leaders met on the sidelines of a summit of the Shanghai Cooperation Organisation (SCO) in ex-Soviet Uzbekistan on Thursday against a background of high tensions with the US.

The meeting was part of Xi's first trip abroad since the early days of the Covid pandemic.

"China is willing to make efforts with Russia to assume the role of great powers, and play a guiding role to inject stability and positive energy into a world rocked by social turmoil," Xi told Putin at the talks.

Chinese state broadcaster CCTV also quoted Xi as saying China was willing to work with Russia to support "each other's core interests and deepen practical cooperation on trade, agriculture, connectivity and other fields".

Putin indirectly criticised the United States, which has been leading efforts to support Ukraine and impose sanctions on Russia.

"Attempts to create a unipolar world have recently acquired an absolutely ugly form and are completely unacceptable," the Russian president said.

The pair last met in early February for the Winter Olympic Games, days before the Russian leader launched a military offensive in Ukraine.

They referred at the time to their "no-limits" relationship, acting as a counterweight to the global dominance of the United States.

Putin said he appreciated "the balanced position of our Chinese friends in connection with the Ukrainian crisis".

"We understand your questions and concern about this," he added, without explanation.

Beijing has sat on the fence regarding Ukraine, neither supporting or publicly criticising the Russian invasion, while repeatedly expressing support for Moscow in the face of Western sanctions.

"We adhere to the principle of one China. We condemn the provocation of the US and their satellites in the Taiwan Strait."

This came after a US Senate committee on Wednesday took the first step towards Washington directly providing billions of dollars in military aid to Taiwan.

The SCO, made up of China, India, Pakistan, Russia and the ex-Soviet Central Asian nations of Kazakhstan, Kyrgyzstan, Tajikistan and Uzbekistan, was set up in 2001 as a political, economic and security organisation to rival Western institutions.

The leaders of those countries were to attend, as well as Iranian President Ebrahim Raisi, Turkish President Recep Tayyip Erdogan and President Alexander Lukashenko of Belarus – Russia's main ally.

Lukashenko has been shunned by Western leaders after a fierce crackdown on the opposition two years ago and for backing Russia on Ukraine.

Following a meeting with Xi on Thursday, Lukashenko was quoted by state news agency Belta as thanking Xi for China's "serious support in these difficult times".

For Putin, the summit comes at an important time, as his forces face major battlefield setbacks in Ukraine and amid a continued Western push to make Russia an international pariah.

For Xi, it is an opportunity to shore up his credentials as a global statesman ahead of a pivotal congress of the ruling Communist Party in October.

As if to signal their rapprochement in the face of tensions with the West, Russian and Chinese ships conducted a joint patrol in the Pacific Ocean on Thursday to "strengthen their maritime cooperation," the Russian Defence Ministry said.

The main day of the SCO summit will be on Friday, with sessions involving all the attending leaders.