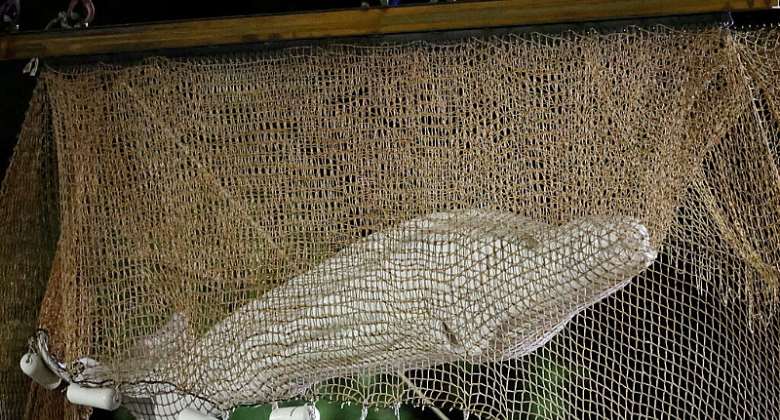 Tests were underway on Thursday on the body of the beluga whale that was euthanised while being transported from the river Seine to the open sea.

The four-metre long mammal - which usually swims in Arctic and sub-Arctic waters - was spotted in the Seine some 70 kilometres from Paris on 2 August.

Attempts to steer it back towards the sea failed as it became stranded between two locks in the river.

It refused to take food as its health in the warm, fresh water started to deteriorate.

Plan
On Tuesday, a plan was hatched to remove it from the river and eventually release it in one of the locks at Ouistreham in the Calvados region of north-western France.

A team of nearly 80 firefighters, vets and marine animal researchers worked through the early hours of Wednesday morning to lift the 800kg mammal out of the water at Saint-Pierre-la-Garenne and into a specially constructed crate on a barge.

But after the three-hour transfer in a refrigerated truck from Saint-Pierre-la-Garenne to Ouistreham, a team at the Veterinary and Phytosanitary Border Inspection Service decided the whale was so malnourished that it could not survive and authorised it to be euthanised.

Decision
"The six vets at the medical examination were unanimous," said regional official Guillaume Lericolais. "It had to be euthanized."

The tests will be carried out by the marine mammal observatory Pelagis at the main regional laboratories in Saint-Contest, near Caen, north-western France.

"They'll be done in order to enrich our knowledge on these mammals," said a statement from the French Office of Biodiversity.

Marine animal experts and environmentalists had acknowledged the rescue operation carried the risk of fatally stressing the mammal.

But marine conservation group Sea Shepherd France said that it could not have survived much longer in the Seine.

"Thank you all for your support," said a Sea Shepherd France statement.

"Thank you to our volunteers who mobilised in record time and who have remained at the beluga's side for days, and thank you to all the people involved in this rescue from near or far."

Galamsey fight: Godfathers have disowned their child but wil...
35 minutes ago