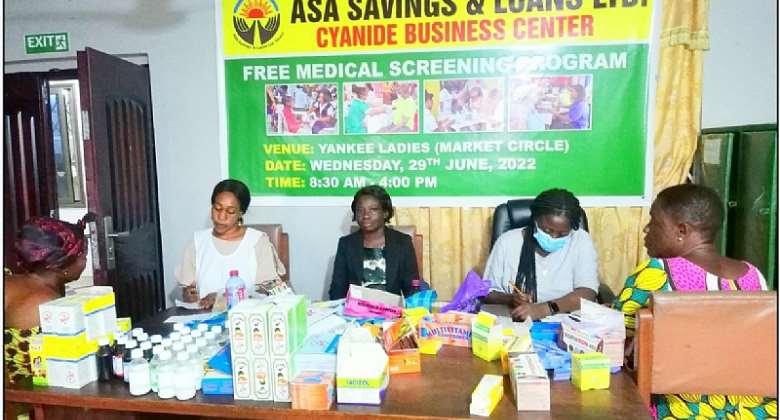 ASA Savings and Loans Limited on Wednesday, June 29, 2022, organised free health screening for its customers at Cyanide Business Centre in the Western Region of Ghana.

At the end of the exercise costing GHS4,024, a total of 105 people benefited.

According to the Head of the Medical Team, DR. Helena Gaisie, the most occurring diseases after the screening were malaria and blood pressure.

The customers who were having such problems, especially high blood pressure were counseled on ways to stop or minimize it.

They were counseled to cut down on eating too much sugar, salt and excessive alcohol. They were also advised to do exercises, eat a good diet, consume plenty of water and have enough rest.

Some of the customers who spoke to the media during the exercise expressed appreciation to ASA Savings and Loans for the great initiative, stressing that it has helped them know their health issues bothering them which they were not aware of.

They promised that they will yield to the advice given to them by the medical team.

At the short presentation, the Area Manager of the company, Mr. Md Nasimul Islam said, there was a need for the health screening as it forms part of the company’s Corporate Social Responsibilities (CSR).

According to him, medical screening is organised regularly to keep the customers healthy and fit.

“If people's health is not good they cannot do any work. Their daily income is cut off then they will face poverty. Therefore all the organizations should be helped with the medical treatment for rural people,” Mr. Md Nasimul Islam said.

As a company, Mr. Md. Nasimul Islam said it has always been their priority to meet the needs of their stakeholders through CSR to foster developmental change in living standards.

He added that the gesture is to help the needy as has been done by the company in the past.

He urged the private sector to make a conscious effort to meet the needs rather than the wants of their stakeholders through CSR.

He emphasizes that there are more things the company has planned to do in the course of the year.

'Forgive me if I was wrong to spearhead renovation of Asomdw...
44 minutes ago