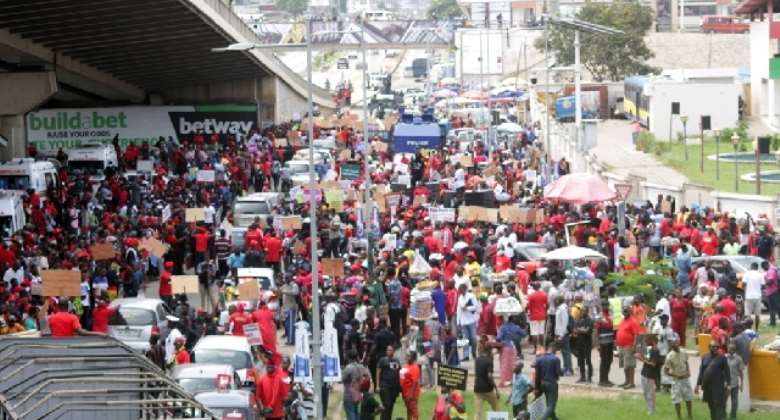 The People’s National Convention (PNC) has dissociated itself from the ongoing Arise Ghana protests.

The party says the marchers should rather suggest alternative solutions to the country’s economic problems through public for a and dialogue.

The first day was marred by violence as the demonstrators clashed with the police over route disagreements.

The police fired rubber bullets and tear gas into the crowd as some marchers pelted them with stones and other crude weapons.

So far, the police has arrested 29 protesters in connection with the disturbances.

The PNC, in a statement signed by General Secretary Janet Asana Nabla, said the party believes that demonstrations are a “part of our democratic dispensation” but “street protests such as the one organised by Arise Ghana, “must not and should not be the way a group” vents “its disappointment” with the government, “especially in this current circumstance”.

It said: “Certainly, street protests, as a form of demonstration, are becoming outmoded in modern democracies and protesting without providing solution is equally outmoded”.

“At this material moment, the PNC is calling on fellow Ghanaians, the Arise Ghana group, in particular, to rather demonstrate alternative policies that will aid the current government to ameliorate the current economic difficulty and to criticise the government’s policies via public fora, organising institutional lectures, peacefully submitting petitions to the appropriate government institutions and making use of our court system to push through demands, amongst other means”.

“The PNC has taken note, with delight, the many pro-poor intervention policies and the adoption and deployment of IT infrastructure which are widely accepted now as the ‘4th industrial revolution’”.

“The PNC has always advocated home-grown policies that must be adopted as a paradigm shift from the usual IMF and World Bank acid prescriptions that devastated many economies, especially Africa and Latin America”.

The party noted: “The COVID-19 and the Russian-Ukraine war have greatly impacted the economy of Ghana and the world as a whole. The Director of the World Bank Prospects Group, Mr. Ayhan Kose, revealed that the latest projection for global economic growth has declined to 2.9% from 5.7% last year”.

“The PNC would like to advice the government to consider expanding the tax net and paying attention to property tax amongst several others, which would help in lessening the tax burden of the Ghanaian citizens”, the party suggested.

The party further advised that the government prioritise investment in the agriculture sector, which, it believes, “will help boost our agricultural output and reduce the $1.3 billion worth of rice, soya beans, maize and poultry importation into the country”.

“Our forex system must be reviewed”, it added, noting that the ‘black market’ must be regularised, “as this is contributing to the scarcity of forex in the country”.

The party also wants the government to “spearhead the enactment of laws to account for the unexplained wealth of individuals and even groups in the country”.

The PNC said it “believes this will reduce corruption to its barest minimum”.

Dissociating itself from the march, the party said it wishes to “use this medium to serve notice that we are not part and we do not subscribe to the Arise Ghana demo”.

Warnock wins Georgia run-off against Walker to win the Senat...
36 minutes ago