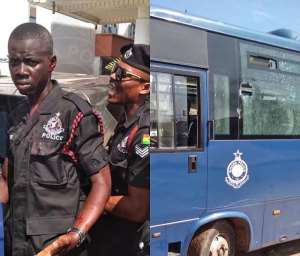 The Ghana Police Service has disclosed that 12 of its officers deployed to offer protection during the Arise Ghana demonstration on Tuesday, June 28, 2022, sustained various degrees of injuries.

A protest that was expected to be peaceful today turned chaotic in the afternoon following an impasse on the route for the protest.

From a Police statement, it notes that contrary to the court order, the organisers insisted on using routes leading to the Jubilee House.

During an altercation, stones were pelted by protesters with the Police also firing tear gas and water canons.

From the violence that ensued, the Police says 12 of its officers sustained injuries and have been conveyed to the hospital for medical care. In addition, some vehicles of the force have been damaged.

“So far, 12 Police officers who sustained various degrees of injuries and were treated in the Police Mobile Hospitals have been transferred to the Police Hospital for further treatment. Some police vehicles have also been damaged,” part of a statement issued by the Ghana Police Service said on Tuesday evening.

It continued, “The demonstrators further regrouped and burnt tires on the road around Circle. The fire from the burning tires has since been put out by the police.

“The Police, therefore, had no option but to use tear gas and water cannons to subdue the rioting and restore order. The process is still ongoing.”

Meanwhile, Modernghana News can confirm that several protesters also sustained injuries from the incident at the Arise Ghana demonstration.

Below is the statement from the Ghana Police Service: