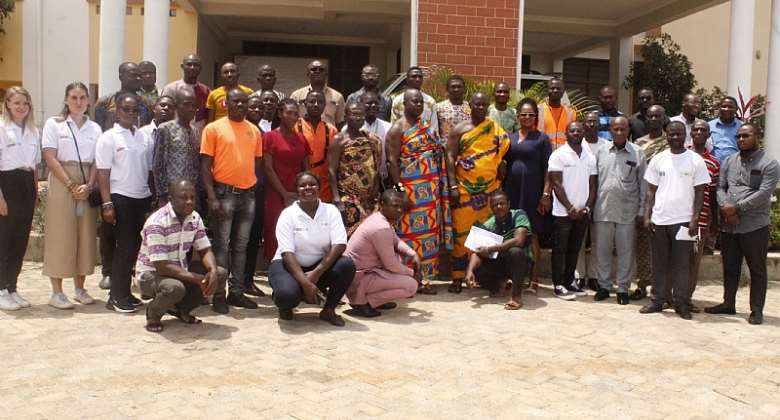 Mr. Obed Owusu Addai, the managing campaigner for EcoCare Ghana has called on stakeholders to fast-track the conclusion of the Tree Tenure and Benefit Sharing Framework to motivate communities and farmers to plant and conserve trees.

He noted that, due to the unfavourable nature of existing benefit-sharing arrangements on naturally occurring and nurtured trees, farmers are not motivated to keep them on their farmlands. This situation, he observes has led to the loss of biodiversity and defeats the government’s efforts of restoring degraded landscapes outside forest reserves.

He made the call at the launching of EcoCare Ghana’s Community-led Restoration Project (CRP) at Akomandan, in the Ashanti Region of Ghana. The CRP is a 5-year landscape restoration initiative being implemented by EcoCare Ghana in the Transition Landscape of Ghana. It is funded by One Tree Planted through the flagship African Forest Landscape Restoration Initiative (AFR100) which seeks to restore 100 million hectares of degraded land by 2030. The project seeks to collaborate with communities, smallholder farmers and key stakeholders to grow and nurture an estimated 300,000 seedlings.

Speaking at the launch of the project, the District Chief Executive of Offinso North District, Mr. David Kwasi Asare was overjoyed that the Offinso Districts have been selected as beneficiaries. He bemoaned that, the district has lost its thick forest and is gradually turning into a grassland.

According to him, this has led to the loss of most of its biodiversity and reduced soil fertility, therefore impeding organic farming. He emphasized that the project can augment government’s Green Ghana Agenda, which is aimed at increasing the country’s forest cover if well embraced. He alluded that the negative impacts of climate change on agriculture are visible and affirmed that “a green future is necessary for the survival of our planet, and we must do all we can to bequeath the next generation with a greener and better future”.

Nana Apenteng Gyiabour of Afrancho who chaired the occasion called on traditional rulers to make land available for such restoration projects to ensure environmental sustainability in their communities. He entreated the government to heed the call for the quick conclusion of the Tree Tenure and Benefit Sharing Framework to motivate communities to invest in tree planting and conservation. He also admonished the Forestry Commission to make it a priority to stop the activities of illegal chain-saw operators in the District.

Stakeholders present at the launch planted trees in front of the Offinso North District Assembly to commemorate the commencement of the Community-led Restoration Project.