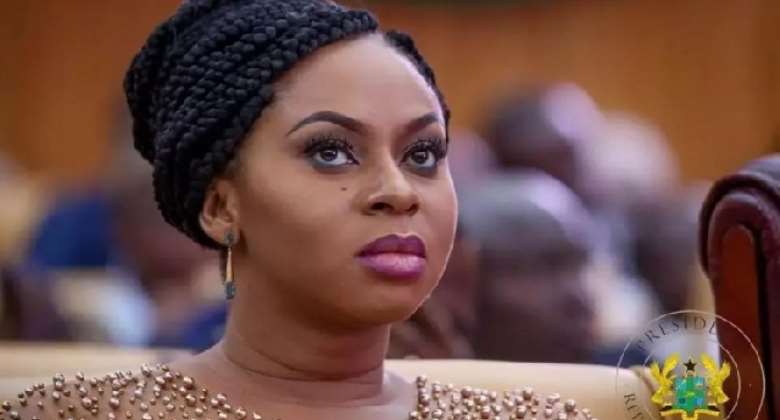 Dome-Kwabenya MP Sarah Adwoa Safo has said she is not aware she has been invited or served a notice of appearance before the Privileges Committee on Friday, 27 May in connection with her long absence from the law chamber without permission.

“I am not aware such a thing has been given to me”, she told Accra-based Joy News on Thursday, adding: “I am just hearing it from you”.

“As we speak, I don’t know that I have been invited”, she stressed.

The Minister of Gender, Child and Social Protection said she will only return home from the United States when he sick son is declared fit and healthy.

She is billed to appear before the Privileges Committee along with Ayawaso Central MP Henry Quartey and Assin Central MP Kennedy Agyapong.

The Speaker of Parliament, Mr Alban Bagbin, had earlier explained to the house that: “I have accordingly come to the irresistible conclusion that a member who absents himself or herself from 16 sitting days of Parliament in a particular meeting, without the permission in writing of the Speaker, falls squarely within the ambit of Article 97, clause 1(c) of the 1992 Constitution and Order 16(1) of the Standing Orders of Parliament”.

A former Member of Parliament for Kumbumgu Constituency, Mr Ras Mubarak, petitioned the Speaker of Parliament, Mr Alban Bagbin, to enforce Article 97(1)c of the 1992 Constitution by referring some four MPs to the Privileges Committee for absenting themselves for more than 15 days without permission.

According to the ex-lawmaker, the Standing Orders of Parliament are not clear as to who can or should raise the matter of absenteeism on the floor of the House for a debate and, or referral by Mr Speaker to the Committee on Privileges but it is incidences like this, if unattended to, that threatens Ghana’s democracy.

Quoting an Afrobarometer data, Mr Mubarak said trust in Parliament has fallen by 12 per cent between 2002 and 2019.

The report, he said, ranked Parliament as the third corrupt institution in the country – just behind the police and judges.

“I humbly submit that democracy can only work if Parliament puts the common good ahead of party and personal interest. At a time of seeming collapse of trust in politics and Parliament as an institution, it is my fervent prayer that the House would rise to the occasion and be united on this matter, so as to uphold our constitution and also win back waned public confidence,” the petition stated.

The Speaker of Parliament referred the matter to the Committee, following the absence of the MPs for more than fifteen days without permission.