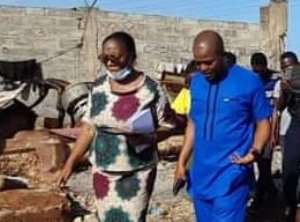 The Environmental Protection Agency (EPA) has installed monitoring technical equipment to track the source of the suspected chemical substance that polluted parts of Tema Newtown on the evening of Tuesday, May 10, Mr. Frank Asante, Tema Metropolitan Assembly Public Relations Officer has disclosed.

The EPA equipment could pick the slightest trace of any chemical substance in the air that they believed was still in the atmosphere, Mr Asante, therefore, appealed to residents to corporate with the EPA officers to help unravel the cause of the discomfort they experienced on Tuesday and put in measures to prevent a recurrence in the future.

Mr Asante speaking to the media after a working visit to the community by Mr. Yohane Amarh Ashitey, Tema Metropolitan Chief Executive, accompanied by Madam Irene Opoku, EPA Tema Regional Director who tour the fishing harbour and canoe basic enclaves as part of the investigations, which was monitored by the Communication for Development and Advocacy Consult (CDA Consult) at Tema.

He said the EPA forms part of the investigations process initiated by the Tema Metropolitan Assembly to unravel the cause of the suspected chemical substance pollution that some residents believed emanated from the sea.

Residents made up of both the young, babies and the old in the Sea-Light Electoral area spanning from the Eastern Naval Base through to adjourning communities had to resort to the use of nose masks as the pollution led to itches in the eyes and nose and uncontrollable cough for hours.

Mr. Asante said the team of EPA officers assisted by Mr. Michael Otoo, Assembly Member for Sea-light identify some affected households and are leading the investigation.

He gave the assurance that the TMA and EPA were committed to ensuring the Metropolis which is known to be the industrial hub of Ghana would not compromise the health of its residents even as the industries carry out their respective manufacturing of goods.

Madam Opoku also confirmed that the Agency is undertaking thorough investigations to unravel the cause of the suspected chemical substance pollution that occurred in Tema Newtown.

She said the EPA team went to the community to have interaction with the indigenes and the Assemblyman of the area who indicated that they were no longer feeling the smell of the chemicals in the air.

Ms. Opoku mentioned that the Agency was taking steps toward finding the cause of the occurrence and dealing with it appropriately as it was a public health concern.

She said thorough monitoring was underway as part of the investigations to know exactly what was released into the atmosphere which led to the people reacting by way of coughing and experiencing facial burns.

She indicated the Agency has also visited most of the companies around the area as part of the preliminary investigations to check if there were some form of leakage, “we are still monitoring and will come out with our conclusions soon”.