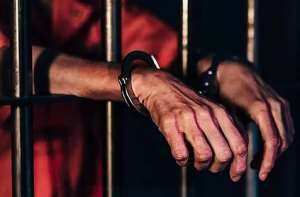 A New Jersey man has been sentenced for murdering three people and attempting to kill three others after becoming enraged over a Facebook post.

The prison term is the equivalent of three life sentences per New Jersey law, to be served consecutively, along with an additional 50-year sentence for each of three counts of attempted murder.

Under the state's “No Early Release Act,” which mandates inmates to serve at least 85% of their prison term, Arrington will be eligible for parole in 281 years.

“Justice has been served,” said Deputy Chief Assistant Prosecutor Justin Edwab. “This defendant is pure evil and clearly deserves all 375 years in New Jersey State Prison for the terrible crimes he committed on Nov. 5, 2016. These families have waited over five years for this moment, and we are all so grateful for this sentence.”

Arrington stood accused of breaking into a Newark home on Nov. 5, 2016, with a loaded gun and holding six people hostage, as previously reported. His captives included the Whitehurst children and McBurroughs – all of whom he murdered – as well as the children's then-29-year-old mother and her 13-year-old twin siblings, prosecutors stated.

Arrington tied the victims up and began torturing them by “stabbing them with kitchen knives.”

At the time, there were nine people in the home, which was owned by the Whitehurst victims' grandmother.

“Police were able to respond because a young girl with autism, who is unrelated to the family and was just visiting, escaped and called for help from her phone in a closet,” according to the prosecutor's office.

Arrington fled before responders arrived at the scene.

The Whitehurst children suffered severe stab wounds and were pronounced dead at the University Hospital, while McBurroughs was shot to death and pronounced dead on the scene.

The Whitehursts' mother and her twin siblings, a male and female, also sustained stab wounds but survived the attack.

Arrington was apprehended the next day at a Pomona Avenue residence, where he barricaded himself and claimed to have a hostage, according to the prosecutor's office. Police learned his claims were false and arrested him shortly thereafter.

“Someone in the house, it appears, may have posted the media account of the fact that Mr Arrington was wanted on a social media platform, and it appears that that's part of the motivation, at least, for him going to the house on Saturday,” then-acting Essex County Prosecutor Carolyn A. Murray said in 2016.

Arrington reportedly believed one of the victims reposted a social media alert by police, which named Arrington as a suspect in a previous shooting and sexual assault, according to NBC News.

Assistant Prosecutor Edwab sought six consecutive life sentences for Arrington, citing the defendant's lengthy criminal background, which included 10 arrests between 2006 and 2016, according to the prosecutor's office. Arrington had four felony convictions and three separate pending charges on the day of the murders.

Jurors deliberated for less than two hours before arriving at the verdict, according to NBC News.

“While nothing can bring back the lives of Ariel, Al-Jahon, and Syasia, we hope today's sentence will provide some sense of closure to their families,” said Assistant Prosecutor Chelsea Coleman.

At sentencing, Judge Ronald Wigler called Arrington's crimes “perhaps the most horrific, heinous, cruel, and depraved murders this county has ever seen,” according to NBC News.

Arrington's defense attorney could not be reached for comment.