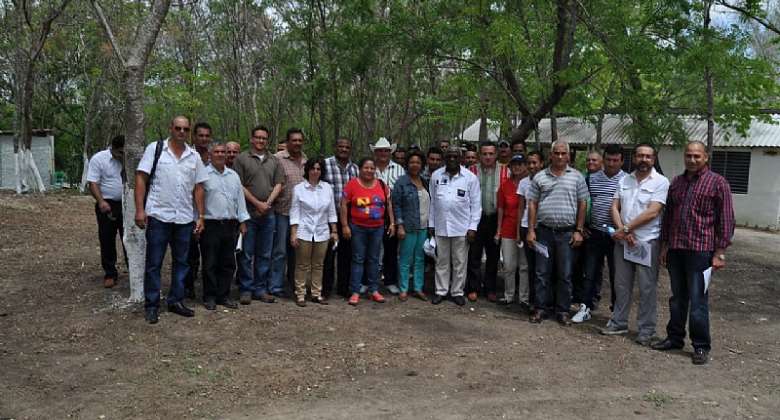 Rome/Havana, 4 March 2022 – The UN’s International Fund for Agricultural Development (IFAD) and the Government of Cuba hosted an event today at the Hotel Nacional in Havana to launch the Agroforestry Cooperative Development Project (PRODECAFE). The project aims at increasing coffee and cocoa production in the eastern region of the country, while contributing to enhanced resilience of this region’s smallholder farmer cooperatives to climate change.

With an initial investment of US$ 42.5 million ($ 18.35 million from IFAD funds and $23.65 from Cuban contributions), the total investment should climb to $63.65 million once further contributions from international donors materialize. The Ministry of Agriculture will implement the project through its Agro-Forestry Corporate Group.

“As previous IFAD projects in the country have proven, investing in cooperatives is the most efficient way to tackle the problems of low productivity, poor equipment, lack of economic opportunities, vulnerability to climate change and extreme weather phenomena, youth migration to cities, gender inequity and scarcity of nutritious food,” said Juan Diego Ruiz, IFAD’s Country Director for Cuba.

PRODECAFE’s goal is to strengthen food security and improve the living conditions of rural families in Cuba’s eastern provinces of Granma, Guantánamo, Holguín and Santiago de Cuba by increasing the production and sales of agroforestry products —mainly coffee and cocoa— and by reducing their vulnerability to climate change and extreme weather phenomena.

The project will directly target 300 agroforestry cooperatives and approximately 17,500 households (around 68,250 people). That figure includes members of cooperatives, as well as day labourers and technical assistance experts who work for the cooperatives. Special emphasis will be placed on women and youth by creating opportunities for them to increase their income and by supporting their inclusion in the cooperatives and their decision-making processes.

PRODECAFE will work with the 300 cooperatives to strengthen their physical and productive assets; boost their organizational, managerial and technological capacities; and improve their natural resources and capacities for adaptation to climate variability. Service providers’ capacities to support agroforestry cooperatives will be built through training, technical assistance and delivery of inputs and services.

PRODECAFE is set to make a crucial contribution to the wellbeing of Cuba’s rural population. Despite its good social indicators, the country’s high dependence on food imports —80 per cent of the consumed food—makes its people highly vulnerable to external shocks such as rises in international food and transport prices.

In addition to agroforestry production, cooperative development plans will support members of cooperatives to diversify their home food production, making them more resilient to climate and economic shocks. PRODECAFE will promote small-scale agricultural activities —such as poultry production, pig breeding, and cultivation of fruits and vegetables — that enhance participant families’ food security and diet, while bringing in modest but frequent income in periods when there usually is none.

The Government has declared food and nutrition security a strategic national objective and a pivotal element of its social and economic policies. Food shortages are due to insufficient agricultural production, which is linked to the country’s unique situation —Cuba is the only socialist planned economy in the region. The decades-long embargo to which it has been subjected has made it difficult for Cuba to access basic agricultural equipment and inputs.

To help face this situation, the new policies assign a growing role to cooperatives to ensure that agricultural production meets the country’s food demand.

PRODECAFE’s logic, design and methodology build on the lessons learned from the ongoing PRODEGAN and the just-finished PRODECOR projects, which successfully helped to develop grain and livestock cooperatives.

The project is fully aligned with Cuba’s Plan for Food Sovereignty and Nutritional Education set to be approved in April by the Cuban National Assembly. The plan focus on lowering food imports and accessing financial and technological resources through external credit lines has, in fact, been the main objective of the two previous projects IFAD has supported since it reengaged with Cuba in 2013.

Now, PRODECAFE will support the gradual transformation of agroforestry cooperatives into modern enterprises with efficient production and services, capable of adapting to the market, the effects of climatic change and other negative external impacts.

Since IFAD resumed its operations in Cuba in 2013, the Fund has invested in three projects in the country —including PRODECAFE— with a total value of nearly $170 million (around $38 million from IFAD funds), benefitting more than 40,000 rural families. IFAD’s Cuba portfolio includes strong strategic alliances with financial partners such as AFD and the Countervailing Fund (France), KfW (Germany), AECID-FONPRODE (Spain) and the LAIF Programme (European Union).