UTAG Strike: ‘Gov’t refusing to meet our demands out of fear’ – Dr. Boadi-Kusi 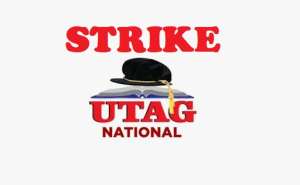 President of the University of Cape Coast chapter of the University Teachers Association (UTAG), Dr. Samuel Boadi-Kusi says government is intentionally refusing to improve their conditions of services and meet their demands regards of them having embarked on almost a month old strike action.

On his accord, the government’s refusal stems from fear of several other unions chasing it for improved conditions and benefits if it dares meet the needs of one.

“What I see stopping gov’t from meeting our needs is because of the rippling effect of attending to the needs of one union. They fear immediately you do that others come chasing after you with their demands too and I think that’s what is most difficult for the employer,” he stated.

Dr. Boadi-Kusi admitting UTAG is well aware of the dilemma of government argues members of UTAG deserve what is due them regardless.

“We can’t let our people suffer because of a rippling effect gov’t fears. We need to engage with gov’t now more than ever and see how we can come out of this. This is doable so far as we set our minds to it,” he told Samuel Eshun on the Happy Morning Show.

He explained the National Labour Commission (NLC) trying to use legal means to get them back to lecture halls is a show of bad faith, “because from where we sit we believe we are better of dialoguing than embarking on a legal battle where everyone will take an entrenched position. We have the chance to engage more and the opportunity has presented itself.”

UTAG argues the employer is showing a lack of commitment, refusing to lay before the Union options to consider. From the perspective of labour, UTAG believes it is easier for the strike to be halted for dialogue “but considering the history behind our demands, lecturers have decided to take this posture until our needs are met.”

Dr. Boadi-Kusi trusts with a high level of commitment and transparency between the Union and their employer, a solution can be reached in the shortest possible time, to prevent public universities from shutting down.

Public universities across the country are at risk of a mass shutdown as the University Teachers Association of Ghana (UTAG) strike enters its third consecutive week.

The strike is nearing its 21-day ultimatum for the continuous suspension of academic activities.

By statutes, public universities must be closed down after 21 days of non-academic work.

UTAG resolved to continue its strike unabated, despite the National Labour Commission (NLC)’s declaration of the industrial action as illegal.

Academic work has stalled for almost a month after students reported to school because of a nationwide industrial action by UTAG.

Among other things, UTAG wants government to reconsider the payment of its annual research allowance to a more realistic allowance “as this is critical to our research output, promotion and ultimately national development.”

They also want the 2013 Interim Market Premium (IMP) of 114% of Basic Salary restored.

The channel we used was the same channel Joy FM used to get ...
5 minutes ago