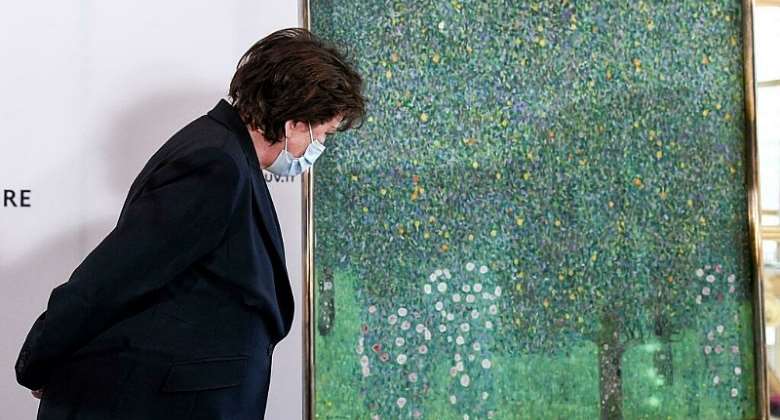 French parliamentarians have voted unanimously in favour of a bill to restore stolen artworks, looted by Nazis during the second world war, to their Jewish owners. Culture minister Roselyne Bachelot said it was a "historic" moment that would set wheels in motion for further restitutions.

On Tuesday evening, parliamentarians voted on a bill which in its initial stage would allow for the restitution of 15 artworks confiscated from Jewish families by German soldiers during the Second World War.

Among them, a painting by Gustav Klimt and another by Marc Chagall.

Speaking in the presence of some of the family members, Culture Minister Roselyne Bachelot was met with applause when the "historic text" was validated by 97 votes from across the entire political spectrum.

The bill will be adopted by the Senate in definitive form on the 15 February.

The confiscation of the artworks, as part of the Anti-Semitic legislation put in place during Germany's occupation of France, was a form of "negation of humanity for the Jewish families, their memories, souvenirs and emotions," the minister said.

It's the first time since the end of the war that the government has devised such a specific text to allow for works held by public institutions to be handed back, Bachelot said.

The promise to hand back stolen cultural property began with an initiative launched by former president Jacques Chirac in 1995, when he acknowledged France's responsibilty in the deportation of Jewish people during World War II.

"In concealing nothing about the dark hours of our history we are simply standing up for a vision of humanity, of human liberty and dignity," Chirac said at the time.

The Commission for the Compensation of Victims of Spoliation (CVIS) set up in 1999, has played an active role alongside a special commission set up by the French cultural ministry, in finding the original owners.

Lengthy research revealed that the Rosiers sous les arbres by Gustav Klimt originally belonged to Austrian woman Eléonore Stiasny, from Vienna, who was forced to sell it in 1938, during the 'Anschluss' annexation of Austria into Nazi Germany. She was later deported and murdered in 1942.

Held at the Musée d'Orsay in Paris, it's the only work by the Austrian artist belonging to the French collection. It was acquired in 1980 by the government from an art seller.

Eleven drawings kept at the Louvre, Musée d'Orsay and a sculpture from the Musée du Chateau de Compiègne are to be restituted to the heirs of Armand Dorville as they were considered to be sold in unclear conditions in 1942.

A painting entitled Carrefour à Sannois by Maurice Utrillo, bought in 2004 at a sale in London and held at the Musée Utrillo-Valadon, will be returned to the descendants of Georges Bernheim. The research into the original ownership was only concluded in 2018.

The Father (Le Père) painted by Chagall in 1912, displayed at the Centre Pompidou since it was acquired by the state in 1988, was also added to the list.

The original owner was found to be David Cender, a Jewish musician and instrument maker from Poland who immigrated to France in 1958. The painting was stolen when the owner was imprisoned in Lodz in 1940.

Bachelot indicated that many other works will no doubt come to light, as research continues; particularly into the collections from 1933 - 1945.

"This is a moment when we can tend to the wounds of the past," said Fabienne Colboc, rapporteur and commissioner for cultural affairs, during the presentation of the bill, which came just two days before the International Holocaust Remembrance Day on 27 January.

"It is up to us as individuals and collectively, to face up to our responsibility and do what we can today to give back to these people a piece of their family identity, sometimes, it's the only trace of these victims of the Shoah."

She expressed the hope that thanks to the bill, more artworks could be handed back, and the legal administration time reduced.

Hottest Photo Reports
Catch up with all the political quotes from our politicians.
Advertise here
More France
ModernGhana Links
Cannes film-makers urge France to face up to colonial past
Will France get closer to the Quad to counter Chinese threat in the Pacific?
France's Macron wants 'quick opinion' on Moldova request for EU membership
Probes into anti-France demo deaths in Niger say cause unclear
'Heat dome' in France delivers record May temperatures
Probes into anti-France demo in Niger say cause unclear
Paris attacks survivors talk of broken relationships and lives filled with fear in the aftermath
Explainer: why you don’t need to hold elected office to become PM in France
New French PM Borne mandated to put ecological transition at heart of government policy
TOP STORIES