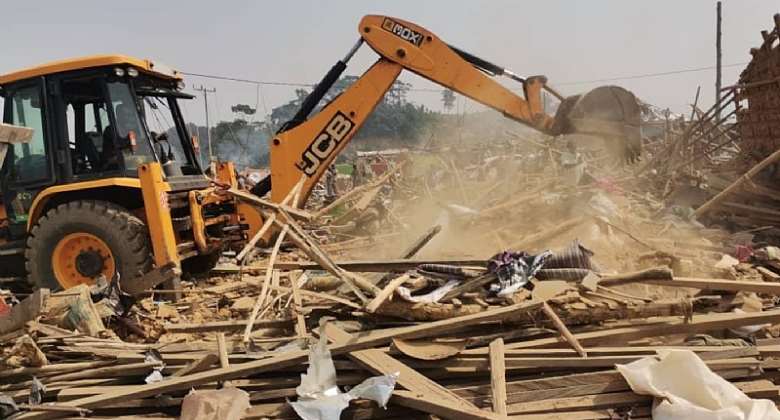 The Ghana Police Service has said the driver of truck conveying mining materials that resulted in the explosion at Appiatse helped saved lives of some school children.

On Thursday, January 21, 2022, Bogoso and its neigbouring communities were completely wiped out by a tragic explosion that swept through the entire community.

The incident specifically occurred in a mining town, Appiatse, near Bogoso in the Western Region.

Preliminary investigations reveled that a truck conveying explosive material for a mining company, a motorcycle, and a third vehicle close to an electricity transformer, leading to the explosion.

Although there have been different accounts, the Police after investigations has disclosed how the driver of the truck acted proactively to save the lives of pupils in a school nearby.

“Let me use this opportunity to also state that the truck driver is in good hand. The gentleman who was on the motorbike is also responding to treatment and for the driver, knowing what we he was carrying, was of help to the community here. He quickly rushed to the school, informed the teachers about the danger that at the time was to come and the children were quickly whisked away from this area to a safer ground,” Director General, Public Affairs Directorate of the Police Service, ACP Kwasi Ofori, told journalists on Friday.

The Police reveal that the truck driver also warned some of the approaching community members. Some complied and moved to safety but unfortunately, due to the radius of the blast, a number of people were still affected by the explosion.

Latest numbers from the explosion this afternoon has confirmed that the death toll is 13, instead of 17.

Meanwhile, over 150 people were injured; 36 are said to be critically injured and on admission at various hospitals. Some 13 persons have lost their lives.

Some 96 others who received minor injuries including cuts have been treated and discharged.

Reclassify Achimota forest as reserve; it's a dangerous prec...
6 minutes ago

Wheels of Justice turn fast against Vormawor but slow for Ma...
6 minutes ago