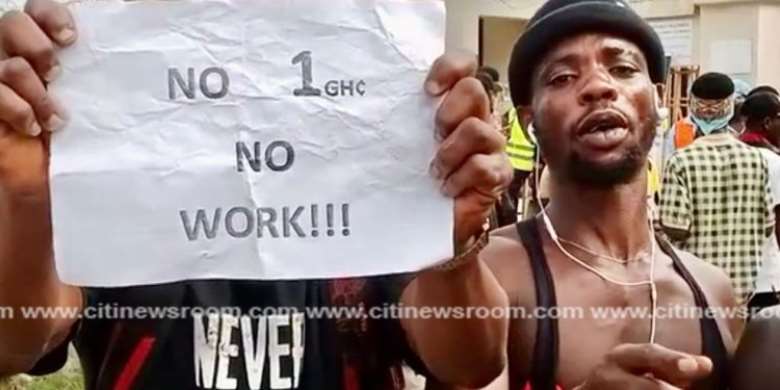 Cocoa carriers have suspended their sit-down strike after a week of agitation to demand an increment in their wages and other better conditions of service.

Cocoa carriers at Tema, Takoradi, and Kumasi abandoned duties and insisted the 62 pesewas they receive per bag they carry should be increased to GH¢1.

Although the Cocoa Marketing Company Limited increased the amount to 82 pesewas per bag, the carriers rejected it and insisted on their GH¢1 per bag demand.

The company employed the services of prison inmates as an interim measure to offload cocoa beans to avoid wastage.

Chairman for the Cocoa Carriers, Raymond Abobiga Atanga told Citi News that they will continue to push for better conditions despite a decision to suspend the strike.

“It is painful but because of our motherland, we have to do this. We want to tell the government and the COCOBOD management that this is not over. Next season, we expect them to put things in order before we start work, if not they have failed as management. We have fought a good fight, and today I want to humbly announce to all of us that because of our motherland Ghana, let’s not allow all the citizens to suffer, so let’s work and pray that COCOBOD will attend to our needs. All carriers should go back to work. If they can’t go today, please take the allocation and go tomorrow,” he announced.

Raymond Abobiga Atanga said they will accept the proposed 82 pesewas per bag rate on the condition that the management of COCOBOD and the Cocoa Marketing Company will put in place measures to address their concerns about their welfare, social security, among others.

He expressed regret that the contractors who recruited them directly have failed to reach out to them since the beginning of their strike.