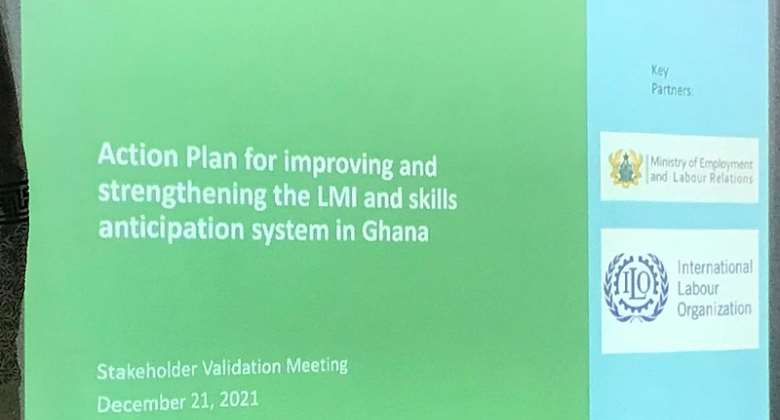 The Ministry of Employment and Labour Relations (MELR) in collaboration with the International Labour Organisation (ILO) on Tuesday, December 21, 2022, met with stakeholders to validate the Ghana Labour Market Information System and Skills Anticipation Action Plan.

There has been the need for the Action Plan after research conducted last year uncovered that Ghana lacks a robust national system for skill anticipation.

The Ghana Labour Market Information System is basically going to look at how to collect data, how to process the data, share the data, so that job seekers can look for jobs, employers can also use the data to forecast the kind of skills that they want to give jobs to the unemployed.

In a country of over 30 million population where unemployment is a major challenge, the implementation of the Action Plan of the Labour Market Information System scheduled for next year is expected to be a game-changer.

The Action Plan has been put into a document on the recommendation that there is the need to enhance the Labour regulation act, improve Labour market information data, build institutional capacity, and integrate skill-match and anticipation modules, among others.

Speaking to the media on the sidelines of the validation meeting, one of the consultants contracted to work with the task force inaugurated by the MELR on the Action Plan, Mr. Alexander Preko said a few additions will be made before it is finalised and handed over to the Ministry.

Mr. Preko said, “With what we have done today if it’s being launched officially [next year] then all employers in Ghana will have a template that they can use, get data from employees so that the system can now be fed with this kind of information then Ministry of Employment will also have the data for people to benefit.”

According to the consultant, the Action Plan included inputs from all relevant stakeholders and hence it will stand the test of time to serve its purpose.

On his part, Mr. Frank Kwasi Adetor, National Project Coordinator for the ILOs Skill Up Project indicated that that the ILO is keen on implementing the skills anticipation component of the Ghana Labour Market Information System which seeks to build the capacity of government agencies to be able to have a very robust market information system in the country.

He said through the ‘Skills for Job’ Project, the ILO is ready to provide the hardware and tools needed to set up the system across the country.

“What we are doing as ILO is to work with the Ministry of Employment and Labour Relations to support the data collection mechanism which was one of the key recommendations from this action plan to make sure we are able to collect reliable data that will be fed into the system,” Mr. Adetor added.

With a good working relationship, the Ministry of Labour and Employment Relations is pleading with the ILO to stay and help at the implementation stage of the Ghana Labour Market Information System after it is launched next year.

The Ghana Labour Market Information System and Skills Anticipation Action Plan is spearheaded by the MERL in collaboration with the ILO and support from Skills Initiative for Africa (SIFA) with funding from the European Union and the German Development Cooperation.