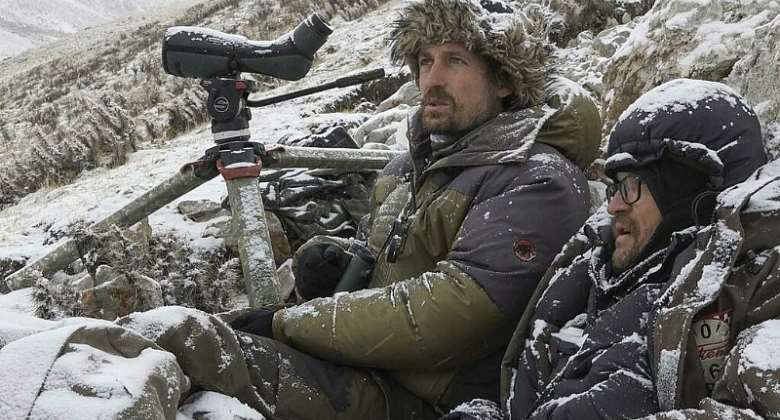 In the busy whirlwind of daily life, there is rarely a moment to stop and contemplate in the world. The Velvet Queen encourages us to do exactly that. Filmed among the highest peaks and wild plains of Tibet, the documentary invites us to follow in the footsteps of the elusive snow leopard and appreciate nature for what it is: sublime.

Like for many things, patience brings rewards to those who wait. The Velvet Queen, entitled La Panthère des Neiges (The Snow Leopard) in French is a sumptuous and moving meditation on the mysteries of time and the ultimate beauty of nature.

After several long trips to Tibet, collecting images of animals great and small, photographer Vincent Munier felt he wanted to go beyond just publishing a book. So with the careful observant eye of director Marie Amiguet, he returned to the places where he had spent hours waiting and watching, hoping to glimpse the snow leopard, a nearly extinct creature in this remote region.

He also took along adventurer and writer Sylvain Tesson who put into words what was otherwise a silent, visual journey. The record of the trip was originally published in the form of a book La Panthère des Neiges which went on to win the prestigious Renaudot essay prize in 2019.

It is Tesson's voice we hear in the narration of the documentary, summing up the long and arduous journey, describing the feeling of being dwarfed by the dramatic landscapes, a simple speck in the rugged mountains.

Despite his extensive travels across the steppes of central Asia and other regions, Tesson, admits to feeling overwhelmed, out of his depth.

The pair spent hours at a time hidden among rocks, waiting, armed with binoculars, hoping to see some movement of animals or birds.

“I understood that things are both very simple and very difficult at the same time. You just have to sit down and open your eyes and let the world be what it is,” Tesson told RFI during the film's promotion in Cannes.

The whole experience taught him to slow down, really open his eyes and look carefully.

“He has created the philosophy of lying in wait,” Tesson says commenting on Munier's fastidious way of working.

Amiguet's presence in the film is extremely discreet. The men go about their tasks, their discussions entirely natural and unscripted.

“It was crazy because we were looking for the panther but she was looking at us looking at the panther, so it was a sort of mirror game,” Tesson recalls.

Naturally spectators are impatient to see some action. Will they or will they not see the snow leopard? And does this matter?

Tesson's portrayal of himself as a frenetic, urbanite stuck on a barren hillside is full of humour and insight, inviting the audience to stick it out. And the effort is clearly worth it. The result is quite simply unforgettable, made all the more poignant by a haunting soundtrack written by Warren Ellis and Nick Cave.

Both Munier and Amiguet are shy faced with the accolades. When quizzed about their experiences following a screening as part of the Climate section of the Cannes Film Festival in July, they simply say they are “happy” with the result but always wonder if they could've done things differently.

Munier agrees the limelight associated with the promotion is not his “scene” but knows it is part of the game – a platform to bring the film to the widest possible audience.

Although the film does not deliberately seek to give lessons on the environment, there is clearly a message to take away.

“Maybe you have to consider that the world is not only a playground but it's the place where we live,” says Tesson, adding that he hopes by inviting the snow leopard onto the red carpet of film festivals, it will help take the animal off the “red list” of nearly extinct animals.

The Velvet Queen, by Vincent Munier and Marie Amiguet, was released in French cinemas on Wednesday (15 Dec).

Akufo-Addo cuts sod for $90million University of Engineering...
3 minutes ago