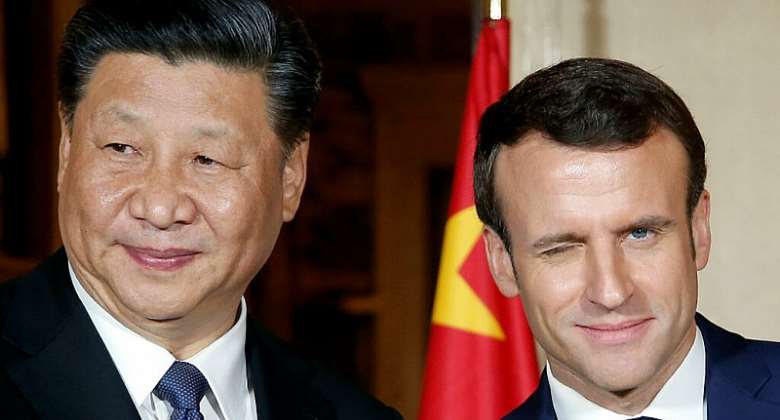 France's influence in the Indo-Pacific came under the spotlight this autumn when a Franco-Australian submarine contract was dropped by Canberra in favour of a security alliance between the US, UK, and Australia: AUKUS. This edition of Paris Perspective looks at France's overtures towards allies in its former colonial neighbourhood and the state of relations between Paris and Beijing.

The poor handling of the AUKUS submarine deal in September left France clutching at straws when it came to asserting its presence in the Indo-Pacific.

China called the US-UK-Australian security pact “irresponsible". Since then, France has been making diplomatic overtures to other regional powers - such as Indonesia, Vietnam and Korea - to push for more influence.

For Antoine Bondaz, research fellow with the Strategic Research Foundation in Paris, you have to look into the history of France's pivotal role in the Pacific that still endures today to understand its current position.

"I think it's very important to remind everyone about French interests in the region. France is not an observer in the Indo-Pacific. France is a resident power," Bondaz says.

"We have more than 1.7 million French people living on French overseas territories, from Réunion Island to French Polynesia.

"It [represents] more than 92% of the special economic zone and maritime domain of France and we have more than 7,000 soldiers permanently deployed in the region."

According to Bondaz, when it comes to the Indo-Pacific, France's role is about sovereignty not just business or cultural interests.

France's strategy in the Indo-Pacific

Yet following the very public diplomatic meltdown among regional allies that came in the wake of the AUKUS pact, many observers found it difficult to pin down France's strategy in the Indo-Pacific and how Paris plays off Beijing when trying to counter China's passive-aggressive dominance in its traditional sphere of influence.

"France decided to lay out its Indo-Pacific strategy a few years ago in 2018, when President Macron visited Australia," Bondaz explains. "And that strategy was very security and defence focused.

"That explains why [France's] ministry of the armed forces in 2019 were the first ministry to release its own Indo-Pacific strategy - it was a security strategy."

Then, between 2019 and 2020, says the researcher, that strategy diversified to include business interests, cultural interests and global interests.

The whole initiative was updated and presented in July of this year focusing much more on trade relations.

So has the US-UK-Australian security deal called into question the whole structure of France's Indo-Pacific strategy?

No, says Bondaz: "It forces France to be clear and recalibrate. Australia was one of the three key strategic partners with France in the region along with India and Japan..

"Australia is no longer a strategic partner. Relations have deteriorated to an all time low and [that's] not going to change in the foreseeable future."

According to Antoine Bondaz, every cloud has a silver lining and the AUKUS deal made France rethink its strategy, reach out to other Indo-Pacific countries.

"We're not going to leave the Pacific," he says. "We're still going to keep the Indo-Pacific strategy, but it's going to evolve a little bit."

The diplomatic dance between Paris and Beijing

When it comes to China, France has been running with the hare, and chasing with the hounds. Paris might have taken a firmer stance with Beijing recently, but France also needs to cooperate with China regarding the Paris Climate agreement, protection of biodiversity, and reform of the World Trade Organisation.

So where do things stand when it comes to direct relations between Paris and Beijing?

"It's ambiguous," says Bondaz. "French diplomats would call it tri-dimensional. The idea from a European view is that China is both a cooperation partner, an economic competitor and a systemic rival.

"It means that we are fully aware that we have to cooperate with Beijing on many issues from climate change to preventing the next pandemic," he adds.

However, relations are always complicated between any EU state and China as all players have to try and balance their relationship with Beijing.

When Macron was running for the presidency, he had two priorities: "The first was to rebalance economic relations with China that are very unbalanced with huge trade deficits," Bondaz says, adding that very little has been achieved on that front, apart from the lifting of a beef embargo.

The second dimension was climate change.
"Some might say that, thanks to France, China stayed in the Paris agreement," quips Bondaz. But it's not because of France - it's because the US under the Trump administration pulled out of the climate deal, giving China a more vested interest in staying wtihin the Paris Agreement.

But for Bondaz, the results of Franco-Chinese relations since the beginning of Macron's presidency have been mixed "and a little disappointing."

Written, produced and presented by David Coffey.
Recorded and edited by Cécile Pompeani and Erwan Rome.

Antoine Bondaz is a research fellow at the Strategic Research Foundation in Paris.

Nkoranza youth court case: Police have proven that TV sets a...
25 minutes ago