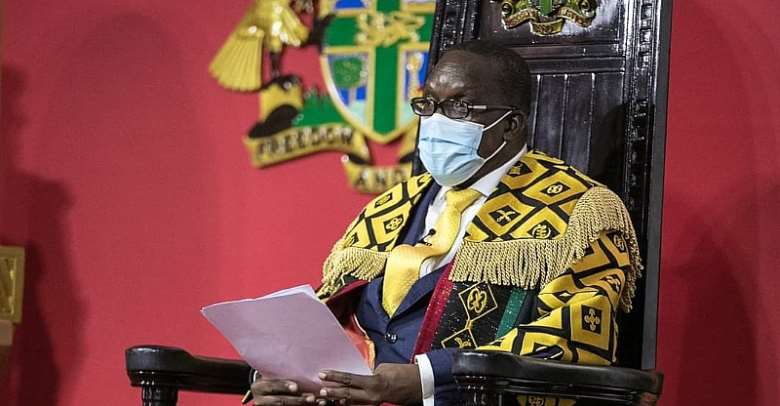 Former Deputy Attorney-General, Joseph Dindiok Kpemka has said he does not support the actions of Speaker of Parliament, Rt. Hon. Alban Babgin describing it as a catalyst for “chaos and crisis” in such critical timing of the country’s development agenda.

He said even though the Speaker is a very astute person when it comes to parliamentary proceedings and affairs as the longest serving member in the House, recent events have given people some level of doubts about his fairness particularly to the Majority.

In his view, even though the Speaker may have been sponsored by the opposition party to be elected to the current position, he would need to remain a neutral arbiter in order to ensure that events on the floor of parliament brings about national development.

“That is what your cardinal duty is. But you see, when I started hearing comments like I am number two, I am number three, I just said they were unnecessary.

“If you look at happenings, I was of the opinion and candidly that, I thought that Mr. Speaker having noticed that at that moment 137 Members of Parliament would not have put the question. Clearly, Mr. Speaker knew that Article 104 was binding on him. And Article 104 as I said is repeated verbatim in the Standing Order and so one would have thought that as a very astute lawyer as he is with so much Parliamentary experience at his disposal, he ought to have drawn his own attention to this and acted in a manner that would ensure that he complied with this constitutional dictate.

“And going ahead to put the question would lead to people raising a lot of genuine and legitimate questions as to whether or not what he did and what he engaged in by putting that question was actuated by goodwill or bad faith, and I will go for the latter,” he argued on The Key Note on TV3.

He said Members on the Majority side of Parliament still not woken to the reality that this current Parliament is a totally different one, not the same as the Majoritarian rule they enjoyed.

In his view, the Speaker is only being an Activist as he has always called for the strengthening of Parliament. Referring to the late Rt. Hon. Peter Ala Adjetey, Mr. Amaliba pointed that the “Activist” Rt. Hon. ASK Bagbin is not the first to behave in that manner.

He argues that the Speaker of Parliament from 1992, has always been criticized by the opposing party as being unfair, adding that “look, even among us, I don’t know if you are aware, among we the NDC, sometimes we criticize him. We said all sort of things to him, there’s been open castigation of him all over the place. So I think he has a mind of his own, what he’s out to do if they all assist him…we need to build a strong parliament because Parliament of the three arms of government is the one that has suffered most… so if we are a democratic country and we are where we are, then we should be looking the way Bagbin is trying to strengthen our Parliament, I think we should support him rather than castigating him."

Members of the Majority walked out of Parliament on Friday when the House was about to vote for the approval of the 2022 Budget Statement.

Rt. Hon. Bagbin still went ahead with proceedings, leading to a rejection of the Budget.

While some people argue that the Speaker should have postponed or adjourn Sitting in order to a have a full House for the voting, others also say so long as the Majority Members had registered to be present in the House and only walked out during the voting, it only meant they had opted to exempt themselves from the voting, which is allowed in parliamentary proceedings.

Already, some members of the NPP have expressed their disgust at the behavior of Mr. Bagbin describing it as unbecoming of a Speaker.

They point to certain utterances he made to the President in his early stages as Speaker, his brushes with the Inspector General of Police and the manner in which he ordered a Minister of State to reinstate the road tolling system recently.