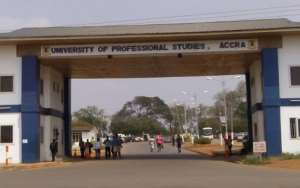 The University of Professional Studies, Accra (UPSA) has asked the general public to disregard a story reported by the media that two female students have been sacked from the school’s hostel for practising lesbianism.

The school is urging the public to also dismissed an earlier statement from the school via which the dismissal announcement was communicated to the public.

“The attention of the management of the University of Professional Studies, Accra, has been drawn to media reports with the headline ‘Two UPSA students sacked from their hostels’”, a fresh statement signed by the Registrar, Dr Koryoe Anim-Wright, dated Wednesday, 24 November 2021 has said.

“Any disciplinary communication that does not follow the above procedure is not authorised by management and should, therefore, be disregarded”, the school noted.

It said the “university further states that no disciplinary report on the alleged incident is before management for final decision”.

“Members of the public are, therefore, advised to disregard the story”, the statement added.

The dismissal letter dated 23 November 2021, said the students engaged in the act during the second batch of the 2020/2021 academic year’s second-semester hostel stay.

Latest Photo Reports
Catch up with all the political quotes from our politicians.
Advertise here
More Headlines
ModernGhana Links
E-levy not reduced to 1%, no agreement reached with Minority group — Ken Ofori Atta
Gov’t succumbs to Minority pressure, allocates GH¢10million for feasibility study on Sea defence project
We’ll continue consultations with minority, others on E-levy – Ken Ofori Atta
'I will come to Accra report you to Akufo-Addo' — Otumfuo angry with Ghana Gas over dumsor in Ashanti Region
Nalerigu: Elderly woman beaten to death over witchcraft accusations
'Money is not my problem' so 'why would I be an NPP mole?' – Duffuor blasts NDC
GPRTU suspends today's strike after invitation to Jubilee House; trotro drivers directed to resume work
You're wicked for calling me an NPP mole; those allegations are false, unfair – Duffuor
Thank you for the wonders of Ghanaian culture, tradition — South Africa's Ramaphosa to Akufo-Addo
TOP STORIES

'I will come to Accra report you to Akufo-Addo' — Otumfuo an...
24 minutes ago