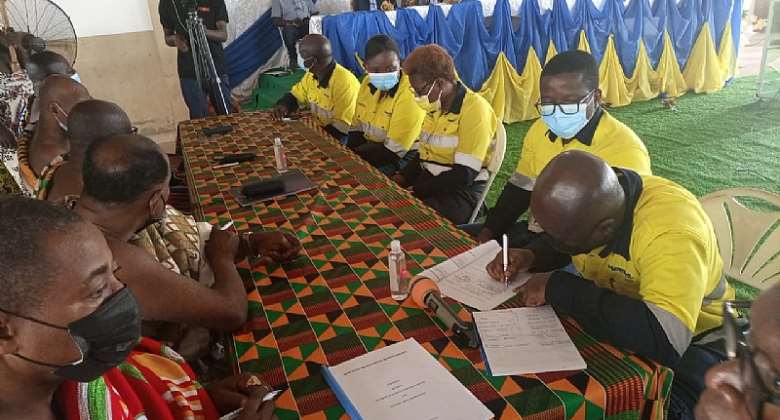 Newmont Ghana Gold Limited (NGGL), in consultation with relevant stakeholders, has revised its corporate social responsibility commitments toward communities around the mine in the Asutifi North and the Tano North districts, both in the Ahafo region.

Officials of the company and representatives of the communities which have been impacted by the mining activities have met at a colourful ceremony at Ntotroso near Kenyase in the Asutifi North District to sign the revised agreements.

This is the second time the three agreements, namely; Relationship Agreement, Employment Agreement and Foundation Agreement have been revised since they were first signed in May 2008 after about two years of deliberations by the Ahafo Social Responsibility Forum, a multi-stakeholder platform established in 2006.

Speaking at the ceremony, the General Manager of Newmont Ghana Ahafo Mines, Okyere Ntrama, said the current agreements have yielded great mutual dividends for the communities and Newmont Ghana.

According to him, the Ahafo Mines now employs about 42 percent of its total workforce and that of its contractors from the local communities in Ahafo through the Employment Agreement.

“With a contribution of one US Dollar per each ounce of gold sold and one percent of its net profit, the Ahafo Mines has provided funding to the tune of US$34.1 Million (106.6M GHS) out of which they have completed and handed over about 127 infrastructural projects to the communities, including other non-infrastructural projects and educational benefits to the Ahafo people.”

For his part, Nana Agyemang Bonsu who represented the Asantehene called on Newmont to get the youth in the area well educated to take up employment opportunities in the company.

He entreated mining companies to be responsive to the needs of the communities in which they operated, especially in the area of livelihood enhancement programmes.

One confirmed dead in youth, Police clash at Kotobabi Market
4 minutes ago