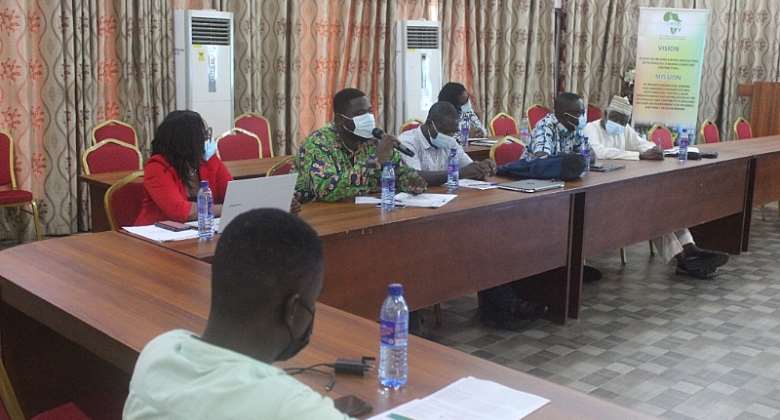 The Northern and Upper East Regional Branches of the Seed Producers Association of Ghana said delays in releasing the Genetically Modified cowpea variety to them for commercial production by the relevant state institutions is a deliberate plan to impoverish them.

Mr. Alhassan Amadu, Northern Regional President of the Association said Nigeria has commercialized this same variety and that their colleagues are currently growing it.

“Nigeria and other neighbouring countries have a higher share in our cowpea market. Very soon they will export grains of this very easy to grow cowpea variety to our market and we will be less competitive because the price of their cowpea will be lower than ours.

"Consumers will buy theirs because ours will remain expensive because of the high cost of production due to insecticide use,” he said.

A statement read by Mr. Alhassan Amadu, Northern Regional President of the Association, at a press conference in Tamale, said the delay had prevented cowpea farmers from cultivating healthy seeds that would boost productivity and increase crop yield.

He indicated that ECOWAS region is moving towards a free trade regime which would see the potential movement of goods freely including GM seeds and food from Nigeria to Ghana.

“Ghana should therefore position itself to take advantage and produce our own needed GM versions of seed to prevent smuggling because the GM varieties will perform better than the conventional seed varieties of cowpea we have in Ghana.

"The Ministers at the Ministry of Food and Agriculture and Ministry of Environment Science Technology and Innovation must be forward looking and support the Council for Scientific and Industrial Research (CSIR-SARI) to ensure the GM seeds are commercialized for farmers.

"Ghana produces only 57,000 tons of cowpea annually although our estimated annual demand is approximately 169,000 tons.

"The deficit is catered for by imports from other West African countries, notably Burkina Faso, Nigeria and Niger.

"No wonder delicacies made from cowpea such as ‘red – red’, ‘waakye’ and ‘koose’ are expensive these days,” he said.

Speaking to this reporter in an exclusive interview, Prof. Walter Alhassan, Senior Adviser Program for Biosafety Systems in Ghana and member of the Open Forum on Agricultural Biotechnology in Ghana (OFAB) Programming Committee indicated that the GM cowpea variety is ready.

“We are counting on the approval of the National Biosafety Authority to authorize the release of the seeds to farmers,” he said.

Mr. Yaw Gyau, a farmer and a member of the National Seed Trade Association of Ghana said seed growers have to spearhead the agenda and communicate well on the issues bothering our business.

“We challenge anyone who has contrary scientific evidence on the GM Cowpea, to come out and disprove our scientists who have worked on this seed,” he said.

COVID-19: Our responsibility to one another is to get vaccin...
51 minutes ago

Bawku disturbance: Cooperate with government to ensure peace...
59 minutes ago