LGBTQI + Must NOT be Legalized in Ghana, KNUST Students Activists Declares 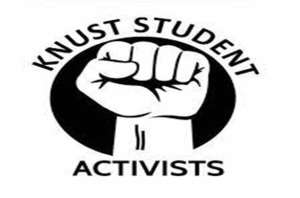 Student activists of the Kwame Nkrumah University of Science and Technology, (KNUST) says they are totally not in support of the legalisation of the Lesbian, Gay, Bisexual, Trans-gender, Queer, Intersex plus (LGBTQI+). They have therefore thrown their weight behind the bill before parliament to be passed to preserve the dignity of the Ghanaian citizenry.

Speaking in an exclusive interview with ModernGhana News in Bolgatanga, the Chairman of the KNUST Student Activists, Martin Lutherking Aduko, stated that he must establish without fear of equivocation that human right advocacy is sine qua non in as much as the core mandate of the KNUST Student Activists is concerned, and will never condescend to endorsing such social and cultural misfit of a debauchery, that the norms of the Ghanaian society, which is foundational to our own identity conspicuously excoriate.

He indicated that, “the Universal Declaration of Human Rights, pioneered by the United Nations in 1948 was never done under the blind fold of cultural differences.”

“Please let’s get this right,” he said, “it’s very unfortunate to have realized how other activists make sophistry against the bill, and seeking to abrogate same in parliament under the curtesy of human rights protection.”

“We must come to the realization that human rights protection does not only mean to protect the individual from infringement by others, of what is considered basic rights as defined by the United Nations General Assembly. The protection also seeks to rescue the subject from abusing his or her own self, in as much as the person’s right is concerned”.

Mr Aduko said, looking at the matter, what may be qualified as basic human right, to say the least would be natural sexual relations, that is if we should consider sexual relationship to be a basic right, but the idea to uphold and recognize the unnaturally invented sexual relationship such as the LGBTQI+ is a non-starter and must be out rightly served as an outcast in the spectrum of basic rights.

He wondered “Why is a person persecuted in his attempt to take his own life? It’s because in the context of human rights protection, the law protects the individual from what it thinks is detrimental to the subject, hence frowns against it”, and cited that, “when Charles Nii Armah Mensah set the country on a goose chase by masquerading to have been under a gun-hunt when in reality he was hale and hearty, did he not face the law? Or was Benson Nana Yaw, when he made an exterminatory threat, pardoned for it?”

The young maverick stressed that, “human rights does not mean absolute autonomy, it does not trumpet the horns of free-will, it operates within boundaries and whiles it seeks to protect, it also seeks to prevent. Whiles human rights protection purposes to shield the individual from inhuman discrimination, it also purposes to protect the individual from themselves, from being abused by their own emotions, from their own desires that are contrary to the natural order.”

“This is the reason why” he said, “although a person might emotionally feel like taking his own life, the law criminalizes the act. It does not mean once the body is yours, we must allow your emotions to manipulate you.” Saying experience shared with those who were once victims to homosexuality is horrifying and the victims wished they never experience it again.

Mr Aduko emphasised that as human rights activists, “We can’t and will never allow your own emotions to abuse your right, and we shall seek to protect you from yourselves. Just as the bill is appropriately named: ‘PROMOTION OF PROPER HUMAN SEXUAL RIGHTS AND GHANAIAN FAMILY VALUES,’ it seeks to promote proper human sexual rights whiles preventing improper sexual activities.

Therefore, the dissention against the bill and progressive efforts to shred its documents by some is in itself a potential human right infringement in disguise.” he added.

He concluded that, President Yoweri Kaguta Museveni of Uganda did it, President Nana Addo Dankwa Akuffo Addo of Ghana can also do it. We will continue to stand for, and purge our society off unhealthy foreign infiltrations

Hottest Photo Reports
Catch up with all the political quotes from our politicians.
Advertise here
More Press Statement
ModernGhana Links
Economic Policy And Financial Statement Of The NPP Government For 2022 Financial Year And Matters Arising
Lawlessness in Parliament by a Speaker in a hurry to Dubai
End violence against women: WHO
CCCFS© Calls on Government to Fast Track Support for Victims of the Storm Surge in the Volta Region
Congratulatory Message On 31st Anniversary Of Diplomatic Ties Between Sierra Leone And The Bolivarian Republic Of Venezuela
Statement From Omnifert Limited On The Support Of The Ministry Of Agriculture To Fertilizer Producers In Ghana
HRAC Press Statement on Francis Dodovi's Hate LGBTQI+ comments
UN Secretary-General: Written message on the international day for the eradication of poverty
Femi Adesina Should Be Relieved Of His Duty For Consistently Making Puerile And Divisive Statements, Unfitting Of A Presidential Spokesperson - Igbo Renaissance Forum
TOP STORIES