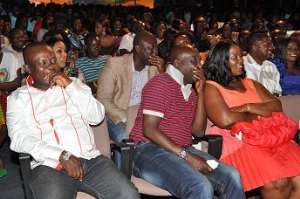 “Shatta Wale had been savagely gunned down by some unknown assailants! He was not dead yet, but he was fighting for his life! His body was punctured with life-threatening bloody wounds, and indeed, the King was in danger. But the good news is that the King was receiving treatment in some imaginary hospital...”

Whoever conceived such ridiculuosity should be paraded in infamy on the streets of Chokor in a blazing furnace akin to the furnace in old Babylon and roasted dry in public opprobrium until the last dregs of folly is cast away from his lungs. Thereafter, we will call upon the Vatican’s Pope to declare him fully exorcised and fit again to dwell in society in sobriety with a clear head.

This matter of people faking everything these days is a troubling pandemic. Everybody is pretending to be something far from the truth. Some women are faking to be beautiful when they are truly very ugly. People are faking orgasm ─ to the extent that these days, we even have orgasm news on our screens! People are faking fame, faking riches, faking gunshots, faking death, even faking to be alive and when they are fundamentally dead! And thanks to social media which has become the rallying point of all that is fake and truly ugly in our world.

Remember the Takoradi woman (I won’t call her a lady) who faked a pregnancy and faked her own kidnapping event to set social media on fire. Her faked kidnapping ordeal with its contradicting theories of rape and brutality gripped our national conscience like wild fire and created an atmosphere of fear and panic among the people of Takoradi. Her story hideously endangered national security without any justification. I hope the Police will deal with her pound for pound!

Then just when the matter seems to be dying its natural death and some resemblance of calmness seems to have returned to the motherland so that we, the ordinary people of this country can continue our search for domestic bread in peace, another caricature of a bloody gunshot at a plush East Legon suburb, with imaginary bullets locked up in the body of a famous musician, flooded social media without let or hindrance.

Shatta Wale had been savagely gunned down by some unknown assailants! He was not dead, but he was fighting for his life! His body was punctured with life-threatening bloody wounds, and indeed, the King was in danger. But the good news is that the King was receiving treatment in some imaginary hospital, whose name we can’t disclose for security reasons. However, serious prayers, petitions, intercessions, and lamentations of all sorts were required for the King, for indeed, the King would surely be back, for though he walketh through the valley of the shadow of death, the King will fear no evil!

And yet, all this encomium is a hoax, a ludicrousity, a perverse strategy to ascend to the echelons of unmerited fame and invincibility at any conceivable cost. In this age of social media dictatorship where everyone wants to be seen or heard at all cost (with or without a message) let’s get ready for more inexplicable folly and manufactured vice.

As for Shatta Wale, I wish him speedy recovery. I trust the Pope to do his work efficiently!