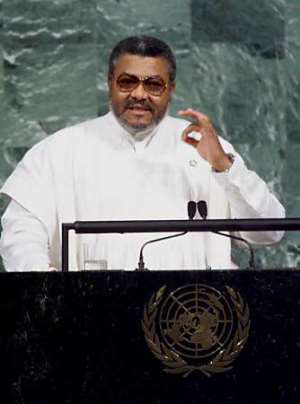 True to the words of Mr. Kofi Coomson of the Chronicle, Rawlings is indeed a name that best sells many tabloids in our country. All you need when your readership is dwindling is to pray for just ‘a morsel of an inkling’ that the ex-President has done this or that, then you are sure to make some unprecedented sales by putting a slant on the piece. So “Gyamfi Paul” could not be anything more than one of those opportunities a journalist would swear never to miss. However, the debate that ensued after the Crusading Guide’s publication really calls for an objective assessment. The story had it that the ex-President, Mr. Jerry Rawlings, underwent a medical treatment at a hospital in Berne, Switzerland with the name Gyamfi Paul for his medical records when he was still the president of Ghana. And as the bill was not cleared before his tenure ended, the amount became a subject of controversy. This was said to be due to the ‘false identity’ he adopted, which the new mission in Geneva thought was unusual and to which they demanded some explanation and authorisation before settlement is effected. The Crusading Guide claims ‘a keen Rawlings-watcher, who preferred anonymity has queried why the ex-President should have assumed a ‘false identity’ while undergoing treatment at the Swiss hospital. “I find it intriguing and even suspicious. Why should he choose to assume a new identity? Was it because the ailment he was suffering from was an embarrassing and unprintable one? Or was it for security reason? Whatever it was, it was improper for the President of a country to approach things in that Nicodemus manner. We need to know more about this matter,’ he said. Though the last paragraph of that report sounds very insinuating, I have taken it as yet another genuine call from genuinely doubting minds who are expressing their need to know why certain actions are necessary at certain levels, not because of parochial interest. Probably, a dialectical treatment of this issue would help the current government with some security techniques to reduce the lapses it has so far experienced since its coming to power. So, to start with, let us take the issue from fraud point of view. Thus, we imagine the ex-President trying to defraud the nation, and we ask the pertinent questions that would help prove or disprove that assertion. Granted, would it mean that the ex-President, the Swiss hospital authorities and the Ghana Mission in Geneva at the time thought he, Mr. Rawlings, was going to use money he was not entitled to for his medical treatment? Or would it be easier to claim payment from government coffers in the name of an ordinary fictitious ‘Gyamfi Paul’ than in the name of the legitimate President of the country? To me, the above suggestions and many similar ones, that share the thought of fraud, sound absurd. They sound preposterous, ridiculous and malicious. For, I know that the President of a country is the embodiment of the people’s identity, the symbol of their spirit and sovereignty. As such, the ex-President was entitled to any treatment anywhere in the world no matter the cost. Meaning unless there is any moral grounds to suggest that the president of the nation, including Mr. J. A. Kufour, should be left to die because of economic reasons, there is no legal argument to bar the payment o! f the medical bill of a sitting President. I stand for correction though. As such, there is no point in allotting part or the entire bill to a fictitious name in other to benefit from state sponsorship. What about the hospital authorities in Berne? They work for money. Expectantly, the story does not in any way suggest that they were unaware of the kind of personality they were about to treat. They knew without the slightest doubt that the subject was a president whose account at the time was synonymous to the Ghana government’s kitty. Moreover, the ex-President’s travel to the Switzerland for medical treatment was no secret in Ghana, and hence no secret in the world, especially, the country where he was to be treated. So there is no gainsaying those scrupulous officials had all the needed assurance concerning who eventually would foot the bills before embarking on the treatment of the ‘Gyamfi Paul’. Another thing to note is that they did not consider it unethical or fraudulent for the ex-President to use a pseudonym; something if imputed would have cast suspicion on how easy it would be to settle the bill and would have engendered a protest from the hospital authorities. Or would Mrs. Rawlings have still insisted the bill belonged to the state while she knew a fraud was about to be uncovered? Suffice it to say the doctors who attended to the President knew him very well. Yet the ex-President’s aide says the pseudonym was for security reasons. If so, is it possible that Mr. Rawlings was no longer in any danger just because his name was changed in the presence of those who mattered in handling his life? No, there could be something else. And it is obviously naïve to limit and narrow security matters to issues concerning the physical harm that could be caused to persons and properties. Unfortunately, most of us, Ghanaians, respect only the big things and inadvertently, we ignore the little things that collectively make up the big things. Unfortunately, we appreciate the obvious things and inadvertently, we ignore what has not yet manifested itself. Now, let us turn to what really necessitated a law on data protection. Though I have not set eye on the Data Protection Act of Ghana, I have good reasons to believe that it is not different from that of the United Kingdom. And in this case, a few of the principles of the UK Data Protection Act may help us unravel some of the mysteries surrounding the so-called fictitious act of the ex-President changing his identity.

The Data Protection Act of 1984 was passed to address growing popular fear that information about individuals which was stored on computer files and processed by computer could be misused. In particular, it was felt that an individual could easily be harmed by the existence of computerised data about him or her which was inaccurate or misleading and which could be transferred to unauthorised third parties at high speed and at little cost.

The Act is therefore an attempt to afford some measure of protection to the individual. Below are some of the principles. 1. The information to be contained in personal data shall be obtained and processed fairly and lawfully.

2. Personal data held shall be held only for one or more specified and lawful purpose.

3. Personal data held for any purpose or purposes shall not be used or disclosed in any manner incompatible with that purpose or those purposes.

4. Personal data held for any purpose or purposes shall be adequate, relevant and not excessive in relation to that purpose or those purposes.

5. Personal data shall be accurate and, where necessary, kept up to date.

6. Personal data held for any purpose or purposes shall not be kept for longer than is necessary for that purpose or those purposes.

7. Appropriate security measures shall be taken against unauthorised access to, or alteration, or disclosure of, personal data and against accidental loss or destruction of personal data. (and more….) (Courtesy Foulkslynch official ACCA Textbook)

Of interest to us are the last two points (6 and 7). We have seen how popular is the fear that harm could be caused to ordinary citizens of a country by unauthorised access to their personal data. We can now consider whether it is important to secure personal data of our head of states and state officials, especially in foreign lands.

First of all, in our hospitals in Ghana here, nurses would shout your spirit out of you if you try to read someone else’s records. And since the matter in question is usually a one-off medical treatment, how easy is it to keep data of the kind not longer than for the purpose for which it has been taken? Secondly, what appropriate security measure could have been taken against unauthorised access to Mr. Rawlings’ personal data in far away Switzerland after he was done with the hospital?

At least by weighing all reasons that have been adduced in explaining why the ex-President was possibly advised by his protocol officers to adopt the name ‘Gyamfi Paul’, it is only the security implication as explained by the aide that makes sense. In brief, the only pressing demand for the pseudonym could be to disguise the personal data, not the ex-President himself, from unauthorised access. In the absence of a guarantee for safe keeping, no one can imagine what an interested party could make of such a record. Or we need either the CIA or Osama Bin-Larden to give us a tip.

Now on a serious note, I cannot see why we should think pseudonyms are fictitious identities. We know that many Journalists the world over use pen names. Some authors even use more than one different name for their books. The question is this: are they trying to steal their own works? Or, are they afraid to take credit for their own sleepless night’s efforts? Definitely, there should be good reasons other than fraud.

Having touched on some technicalities relevant to the matter, I believe it is prudent to sign off with a useful advice given by Gen. Emmanuel Erskine of the People’s Heritage Party of blessed memory and the experienced UNAMIL commander. He believes that some useful lessons could be drawn from the ex-President and his government on how they survived for almost 20 years in power in peace. As such, I suggest that instead of seeing evil in everything the previous government did, it would be advisable to be asking the ‘WHYs?’ For, some of this perceived malfeasance could account for the ex-President’s (Mr. Jerry John Rawlings) success in security matters during his time.