What Magic Is In A 'BOOM' Speech? 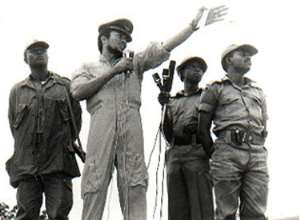 “I am for peace, but when I speak, they go to war.” The source of this quote is not clear. But one thing is certain; it is a common quote, and has often been attributed to the ex-president of Ghana, Flt. Lt. J.J. Rawlings. On Friday, August 9, 2002 the ex-president evoked the quote again. This was when he spoke at the inauguration of the Women's Working Committee of the NDC in Kumasi. He said the people should not wait till 2004 before they stop what he termed the rot in the NPP government; the people must use 'positive defiance' to do that, whilst they wait for the elections. Surprisingly, the government's reaction was very much akin to what the biblical Caiasphas did in reaction to Jesus' reply when he (The King) tore his clothes saying, “He has spoken blasphemy! Why do we need any more witness? Look, now you have heard the blasphemy. What do you think?” Matt.26:65-66. Eventually, the security machinery went into action. The radio stations set tongues wagging, and the tabloids screamed headlines that froze the blood of many peace-loving Ghanaians. But that was not the end. News had it that the Attorney General allegedly dropped a hint in an interview on BBC that the security was investigating the treasonable element of the former president's speech, an offence that could earn an accused a death penalty.

This write up therefore examines the issue holistically in the interest of our young democracy.

To start with, I would like to crave the indulgence of my readers by looking briefly at what a treasonable offence says, and whether it is desirable for us to invoke such a law at this important period of national reconciliation.

According to 'Criminal Law In Ghana' by P.K. Twumasi, “treason is an offence against the security of the sovereign Republic of Ghana. It is essentially an act of disloyalty to the state.

Yet, not going into the detailed provisions of the section 180 of the Criminal Code, 1960 (Act. 29), which states that a person guilty of treason shall be liable to death, it must be noted that in all matters of crime, the mens rea (guilt of the mind) must be proven to establish a prima facie case against the accused. In this regard, the legal profession has this to say, 'Actus non facit reum nisi mens sit rea' meaning the mere doing of an act does not constitute guilt unless the mind is also guilty.

So, if the ex-president stood on a political platform and openly made statements to party supporters in an apparent response to accusations of mismanagement whilst his government was in office, should that constitute treason?

Meanwhile, the government some say is just 18 month in office, and for that matter needs to be criticised leniently, started taking credit barely three months into its reign. Criticising its predecessor anytime anywhere, the NPP uses the previous government as an excuse for areas where it performance falls below expectation. Even simple security lapses are blamed on the past. So, the question I want answered is this; would it be fair and reasonable if the NDC waits till the end of the four-year term to tell Ghanaians where they think the NPP government flopped?

Coming back to the speech in question, I feel the only element in the ex-president's speech that is, perhaps, subject to the law of treason is the belief that he was inciting the people to overthrow the NPP government.

Against this belief, however, the ex-president has demonstrated that he has no such intentions. Besides, if the government insists that it cannot trust him, he (J.J.) has done what should serve to erase any inciting his speech might have caused. His subsequent press conference and his elaborate explanation of what he meant by 'positive defiance' to the hearing of every Ghanaian including his supporters should render benign any implications. So what is the need for the persistent invitations for investigation: to establish the mens rea? And if so, then how?

Some are inferring from history. But unfortunately, most of the inferences are speculative and insulting to the intelligence of the security services and the good people of Ghana. For, these arguments presuppose that, without reflection and without cause, the security men are summoned like fools by a mere pronouncement on a political platform to overthrow a government, after which the citizens take to the street to jubilate. At least, that was not what happened during June 4, 1979 or December 31, 1981.

Before the dawn of June 4, 1979, Flt. Lt. Rawlings was in military cells with some of his fingernails prised off as a punishment for attempting a mutiny on the May 15, 1979. He was then arranged before the court martial, and became known to the ordinary man on the street after he made that famous statement: 'LEAVE MY MEN ALONE! …I am responsible for everything.” Probably, that declaration was the BOOM statement of the time. Yet to assume that that simply caused the June 4 uprising is to underestimate the undercurrents.

To the Flt. Lt., he would be killed. So he was prepared for it, accepting it as a sacrifice for the struggle, as he was alleged to have said, 'if you kill Rawlings, there is more Rawlings'. But to the other ranks and some senior army officers like Capt. Boakye Djan, Maj. Mensah Opoku, Maj. M. Gbedema and Lt. Cdr. H.C. Apaloo, who were not originally involved in the uprising, the coup d'etat was a call to duty motivated by unresolved grievances. Consequently, they broke the jails and released the man, for they had all shared the same dream unconsciously.

What about the civilian populace? They went onto the streets, gave their full support, and jubilated, calling the man Junior Jesus. If this title implied that the 32 years old man was a saviour, what then did the people think he was saving them from? And what are the implications?

Following are some useful lessons we can draw from our bitter past. The people had some perceptions about those in authority. Among this people were our University Students and some elderly in society. Whether right or wrong, they thought their interests were not being served, but they were afraid to criticise the statesmen. The resultant effect was desperation and bottled-up feelings that erupted into the BOOM.

It is important also to note that people who were beaten in our communities were accused by ourselves. We exposed them to the soldiers from their hideouts. And surprisingly, the soldiers also behaved like they were not our own kin and kith. We took delight in the punishment of our own brothers and sisters because we thought they had wrong society.

Similarly, let us go back to December 31, 1981. On April 28, 1980, the Graphic reported of the Third Force Party leader, Dr. Bilson, as saying, “the current national mess in which the country finds itself is eloquent confession of failure and admission of the fact that the longer Dr. Limann stayed in office the more disastrous the consequences will be for the nation.”

When a leading member of the opposition PFP, B. A. da Rocha suggested in parliament that Flt. Lt. Rawlings should mount an anti-coup campaign in the Armed Forces, the response from the public was quick. The People's Evening News captured a reader's comment thus, “as long as we accommodate cheating and conceal crime, and as long as we continue to react only when we are personally affected by an injustice, there will be coups.” (courtesy The Trial Of J.J. Rawlings by Mr. Kojo Yankah)

Here again, the people and the opposition had some perceptions. And it is these perceptions that rendered the ground conducive and fertile for a takeover in December 31, 1981.

Today, the experiences of democracy have dawned on us, so we appear to be wiser. We condemn the past, but we ironically exonerate ourselves. Instead of holding one person accountable, I suggest we bury our faces in our palms in shame and ask for forgiveness of sins from God saying, 'Father, we have sin against you and heaven. We have arrogated to ourselves the role of righteous judges. Sanctify us now and give us the opportunity to start all over again'. This would then set the tone for our reconciliation exercise.

But if we still insist we are not blamable, then how do we compare our past with what happened in neighbouring Cote d' Voire. Whenever the people of that country disagreed with a leader trying to impose himself on them, they resisted fiercely.

I don't mean they are more civilised. What I believe is that no one causes bush fire by dropping a lit match on green leaves. It is how dry the leaves are that determines whether an adventurist succeeds or not. Meaning, it is when people have no hope for the future and no means to ventilate their grievances that they welcome and participate in violent takeovers.

To this end, I wish to say that Ghana has a rich political history. Well analysed and preserved, this history should inform all our steps in a forward match into prosperity. Any attempt, therefore, to obliterate portions of our history, or to twist facts, or to darken an event will leave us in deep waters, since we will have destroyed our 'reference documents' and will have ended up losing our political bearings as a nation.

“POSITIVE DEFIANCE” AND FREEDOM OF SPEEACH

According to the Oxford Advanced Learner's dictionary, 'defiance' is open refusal to obey authority; strong resistance to opposition; action or behaviour that defies. Again, the first meaning of 'positive' from the same dictionary talks of having a helpful and constructive intention or attitude towards something. Combining the two definitions, therefore, “Positive Defiance” could only mean open disobedience of authority that is in the general interest of the people.

Subsequently, there would be two major instances that Ghanaians would or should have recourse to positive defiance. First, should a group of individuals violently overthrow a democratically elected government imposing themselves on the people, there must be civil disobedience. The people must take to the street and demonstrate. The people must refuse to go to work, and they must refuse to co-operate with the self-imposed government. If possible, the people must chase them out of the castle.

Secondly, if a democratically elected government should become so insensitive to the plight of the people, such that the people's right to meaningful life is being trampled upon, there must be similar reactions as above.

Or quoting his Excellency President J. A. Kufour in April 2000 as captured by The Statesman, Vol.9 No.38 Week ending April 9, 2000, there must be “Major Explosions”

if government uses “akpatse or Kwaku Ananse attempt to escape responsibility for what clearly lies at its doorstep”.

Otherwise it is suicidal for us to give “Positive Defiance” a bad name and dump it in the trash can because it is ex-president Rawlings' own coinage for civil reactions that have worked successfully to put the previous government (NDC) on its toes.

In this instance however, some also claimed they became alarmed because the ex-president has a track record of coup making. But it is unfortunate this kind of reasoning only panders to circumstantial argument of ad hominem, which is never intellectual in essence.

In as much as hindsight would advise us not to take any hint for granted, I would prefer government do its security homework well so as to arrest perpetrators of coups in action, not just getting inclined to scare-mongering and violation of citizens' human right of freedom of speech and association. For Article 3 clause 2 of the 1992 constitution says that, “any activity of a person or group of persons which suppresses or seeks to suppress the lawful political activity of any other person or any class of persons, or persons generally is unlawful.”